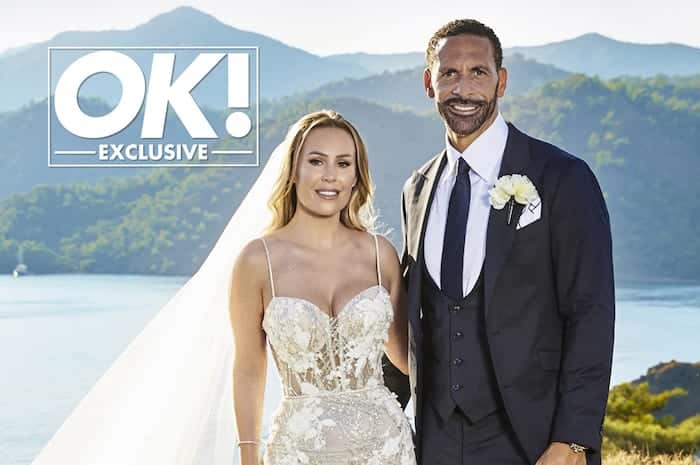 Former Manchester United and England captain Rio Ferdinand and his new wife Kate Wright have described the emotional journey to their fairytale wedding.

The couple married in a spectacular cliff top ceremony in Turkey on Friday with their friends, family, and Rio’s three children all around for their three day wedding party.  The first pictures of the stunning ceremony have been revealed in this week’s OK! Magazine.

And Rio, speaking exclusively to OK!, said he believed it was fate that Kate came into his life – after the tragic death of his beloved wife Rebecca, the mother of his three children, after a short battle with breast cancer in 2015.

Rio said: “I genuinely feel like Kate was sent to us after what we have all been through, she came into our lives at the most perfect time.”

Former TOWIE star Kate wore a dazzling figure-hugging cream lace gown for the wedding, with her hair in loose curls and a flowing cream veil.

Meanwhile Rio was dapper in a dark grey three-piece suit with shiny brogues.

He was left in tears as he saw his bride.  Rio said: “Kate looked unbelievable, just so beautiful. Seeing her in her dress was just so emotional. It all became real and everything just came together for me at that moment.”

She said: “It’s lovely being Mrs Ferdinand. He’s my soulmate. It’s been an emotional journey for sure, but it’s all worth it.”

Rio played 312 times for Manchester United from 2002-2014, and won 81 international caps for England.   Away from the field he has long been involved in community projects, and while in Manchester set up his own music label to nurture young talent, as well as launching Rosso Italian restaurant on Spring Gardens in 2009.

He regularly returns to the city, and Kate threw a surprise 40th birthday bash for her man at Rosso earlier this year.

See all the unseen images and full story in this week’s OK! Magazine – out now