Manchester: the rainy city where the fountains are dry 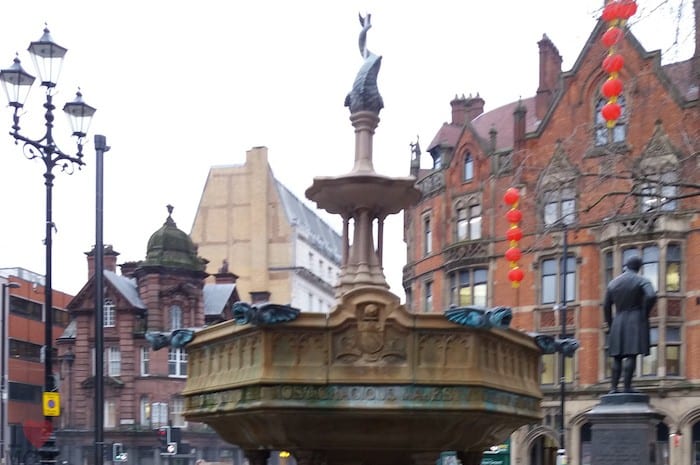 It was a feat of engineering genius that led the world. The 96-mile long aqueduct that brings fresh clean water to Manchester from specially created Thirlmere reservoir in the Lake District remains the longest gravity-fed conduit on the planet.

Yet today, 123 years after its opening, Manchester struggles to maintain the city’s fountains. The most spectacular failure has been in much-maligned Piccadilly Gardens, which has been dry and forlorn for almost three years following problems with underground mechanisms.

The town hall’s city centre spokesman Pat Karney was gushing this week about the repair of the showpiece – but that’s more than the fountain has been capable of since May 2014.

The four-month £400,000 renovation project saw the wooden walls obscuring the site removed this week but the formal re-opening of the 180-jet spectacular, complete with LED lighting, won’t be until late spring. Then, according to Cllr Karney, the fountains of Manchester will be ‘comparable with the fountains of Rome.’ Are you kidding? Think Trevi and Anita Ekberg; the Four Rivers fountain in Piazza Navone; the Triton fountain and weep. 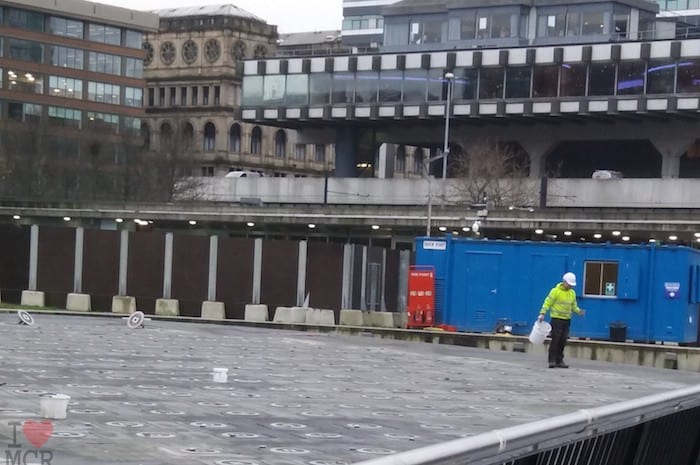 For the fountain in Piccadilly Gardens (a new word for “Gardens” is surely overdue since they no longer exist) is far from the only water-free water feature in the city centre.

The giant taps have been turned off in Exchange Square for some time, the water course running the length of the square is dry and the stepping stones are, well redundant.

When renowned cityscape designer Martha Schwartz returned to the city last year to address the Manchester Histories Festival, she was scathing about the treatment of her Exchange Square creation: “Why pour all that money into a project they can’t look after?” she lamented. “Why employ an artist and then f**k it up?”

This week it was the same sad story in nearby Cathedral Gardens with the babbling brook cascading down from behind the Corn Exchange towards Victoria Station neither babbling nor cascading – just catching the litter.

St Ann’s Square fountain was also dry last week when I took an impromptu tour of Manchester’s not-remotely-like-Roman water features, though the flow of water is not easy to spot when it is actually working. 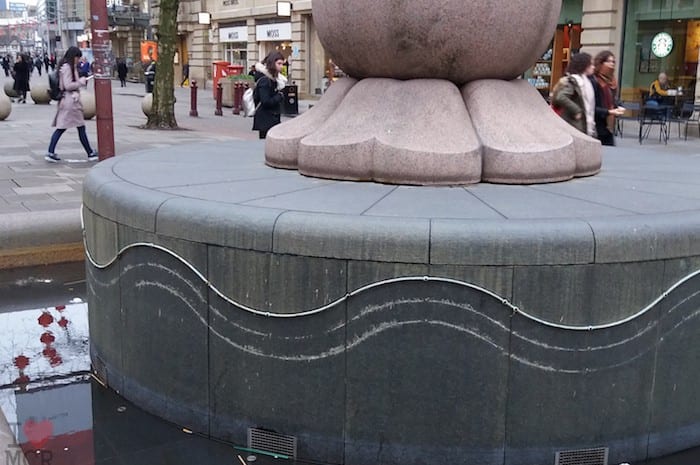 I remember standing next to Tony Blair when it was first switched on. There was a pause as water oozed silently from the base of the pink granite cotton bud sculpture and dampened the black podium, then he said: “Is that it?”

Later modifications increased the water flow somewhat and squiggly ridges in the side of the podium did add a modicum of water movement.

The Grade II listed fountain in Albert Square, created for Queen Victoria’s Diamond Jubilee in 1897 on the spot where the first Lakeland water arrived three years earlier, appears to have been the most reliable and most traditional of the city’s water features in recent times. But its history hasn’t been problem-free.

Not everyone appreciated the fountain. Some complained that they’d got a sudden soaking due to the unpredictability of the local wind. One Edwardian correspondent called for the ‘useless and irritating object’ to be moved to a more suitable open space in the city and for a time it was left dry. In the 1920s the fountain was moved to Heaton Park and not restored to its original location until 1997.

Much more recent is the water feature in Piccadilly Place which can be glimpsed from the Metrolink tram as it snakes through the modern office development from Piccadilly Station towards Aytoun Street. Still and untidy last week, it had at least an inch or two of water covering its brick base. 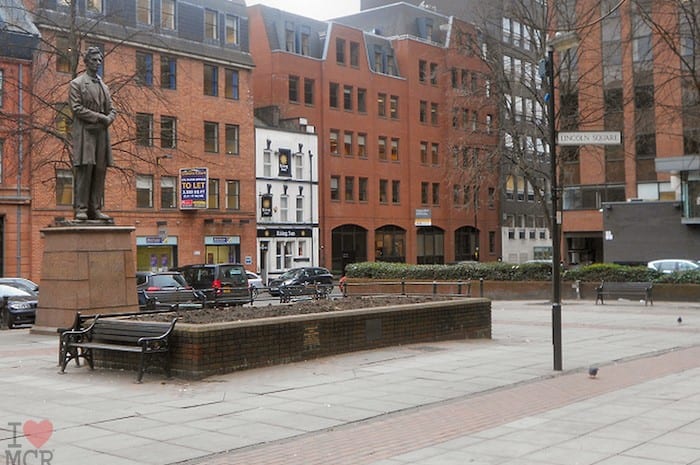 Perhaps saddest of all is the fate of the fountain in Lincoln Square built to commemorate the wedding of Prince Charles and Lady Diana Spencer in 1981. Like the marriage itself, the fountain didn’t last. It was filled in and converted to a raised flower bed and rededicated to her memory after her death in 1997. Look closely and you’ll find the original plaque. But you won’t see any water.

A town hall spokesman told I Love Manchester that the city’s public realm manager had just compiled an update on the fountains. Albert Square and St Ann’s Square were always turned off during the festive season as they couldn’t be on while the Christmas Markets were running.

“We would be inclined to turn the fountains off during the cold months in any case. Post-Christmas we tend to time the turning back on with a maintenance visit as both require a contractor to come in and do this for us. This will happen in the next few weeks but we are at the mercy of the schedule of the fountain contactor.”

Bridgewater Basin fountain by the Bridgewater Hall had been offline awaiting a part from a supplier in the United States. It had arrived after Christmas and was now fixed and online. Cathedral Gardens had “an issue with the build up of leaves” and was off pending a thorough clean-out. Plans were afoot to improve lighting around the fountain and it would be switched back on soon.

“Exchange Square is the next project and the public realm teams are working up options to bring it back online.” Let’s wait and see.