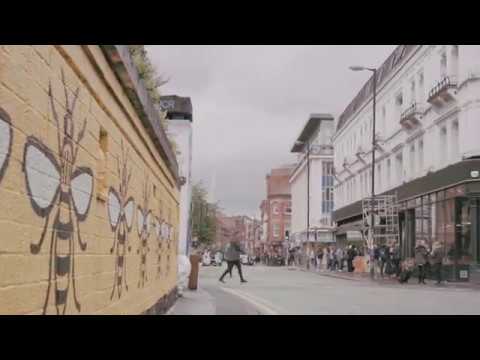 Manchester loves its street art. There are walking tours and Instagram pages dedicated to it. New work goes up almost every day and is easy to find due to the amount of publicity it receives.

Windows, blank walls, even walls that are already covered have been decorated and  redecorated as a tribute to the victims of the Arena terrorist attack tragedy and Manchester’s community spirit.

Street Art evolved from graffiti art which was by and large illegal, but much of it is still risk oriented.

Artists who work publicly know that their work will eventually go sooner or later. “People move on and so does art,” says local street artist Qubek.

There was uproar when he replaced his iconic portrait of Bowie in Stevenson Square with one of Sloth from The Goonies.

A week later he replaced Sloth with a tribute to the people of Manchester following the Arena terrorist attack.

“From the emergency workers to the taxi drivers offering rides and bringing food and drink, the community came together and it was my way of honouring that. When something like that happens it puts everything into perspective and makes the uproar received over replacing Bowie seem really insignificant”.

Qubek is probably best known for his work for Out House, the outdoor project space for public art in Stevenson Square. He’s been in the industry for 18 years and now owns his own business, Mural Life. Art has become his full-time job.

So how do you get your work displayed in public spaces? We asked Qubek.

Get out there and ask business owners if you can paint their walls. Commissions don’t happen overnight and you’ve got to be prepared to work for nothing. Qubek started out with no money. It’s taken him 10 years to get where he is now.

Halls of Fame are walls dedicated to street art but you must respect other artists. For instance, you shouldn’t paint over anything that’s better than what you can do. Give pieces time, never go over a new piece straight away and when you eventually do, make sure you cover the entire piece. There are Halls of Fame opposite Cornbrook station, Ashbury’s Garage in Gorton and Chorlton Meadows.

Keep an eye out for street art festivals. Last year the Cities of Hope Festival saw many top local and international artists come to the city to showcase their art and use it as a way to inspire action on social issues.  There are festivals in many cities around the country such as UpFest, a massive festival celebrating street art in Bristol in July.

Outhouse is an outdoor project space for public art in Stevenson Square responsible for replacing artworks every three months. There’s a waiting list for prospective artists. Email them on outhousemcr@gmail.com or find them on Facebook.