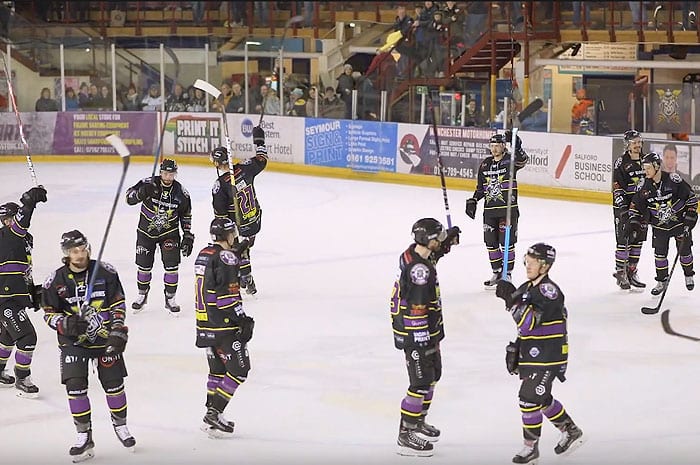 Your Goodwin Group Manchester Storm has announced that the club and the University of Salford will be celebrating their ‘key’ partnership during the Elite League fixture against The Nottingham Panthers this evening as part of the first ever Salford University Takeover event at The Storm Shelter.

The partnership between the club and UoS began several seasons back, and has gone from strength to strength in recent years.

It has become key to head coach Ryan Finnerty’s recruitment tactics during the off-season, with Ryan being able to offer prospective players an attractive package allowing them to play the sport at the highest level in the UK alongside studying at the University of Salford – an opportunity that is valued highly among players.

Speaking on the partnership, head coach and GM Ryan Finnerty commented: “The partnership between ourselves and Salford University has gone from strength to strength over the past few seasons and we want to continue this moving forwards.

“It’s great to see more departments getting involved with the club this season, and we want to celebrate this with our fans at the Storm Shelter on Wednesday night.

“This partnership is vital to us, it allows us to attract better players who are interested in studying as well here in Manchester and we look forward to continuing this great partnership.”

Notable players who have studied at the University of Salford whilst playing for Manchester Storm include Matt Beca, Mike Clemente, Shane Bakker, Luke Moffatt, Dane Byers and Gerard Hanson. 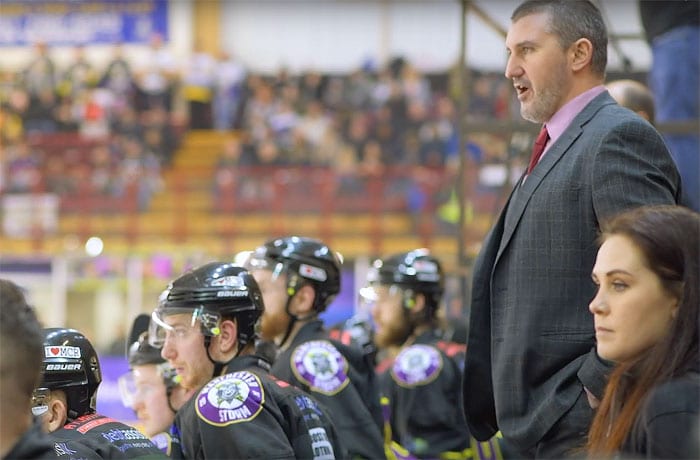 Current Manchester Storm captain and Team GB defenceman Dallas Ehrhardt, now in his fourth season with the club, also studied at the university whilst playing for the club.

Manchester Storm Ice Hockey Club have thanked the University of Salford for their on-going support.

And it isn’t just the people on the ice that get to benefit from the partnership, either. This season the art and design students at UoS also got involved as part of a module.

Students created a range of different jerseys to help celebrate and promote the partnership between the club and the university.

The jerseys were then judged by Liam Hesketh (sponsorship and marketing) alongside Caitriona O’Shea (director of industry collaboration and sport partnerships at UoS), with the winning jersey being manufactured by Dunamis Sports and to be used during an Elite League fixture.

The winning jersey was designed by UoS design student, Joe Swain, who took different elements and colours from the UoS crest to use on the jersey to showcase the partnership.

The jerseys will be used in the Elite League fixture against The Nottingham Panthers on Wednesday 12th February.

The University’s business students also got involved working hard to help organise the takeover over the last few months.

Their goal was to attract more people to watch the sport here in Manchester and to make more students aware of the partnership with The Storm.

Fans will have the chance to win four jerseys this evening at the Storm Shelter as part of the SOTB raffle, with tickets on sale around the rink.

Your Goodwin Group Manchester Storm welcome the Nottingham Panthers on Wednesday the 12th February at Planet Ice Altrincham, 7.30pm. Tickets can be ordered online, by calling 0161 926 8782, or in person at the box office.