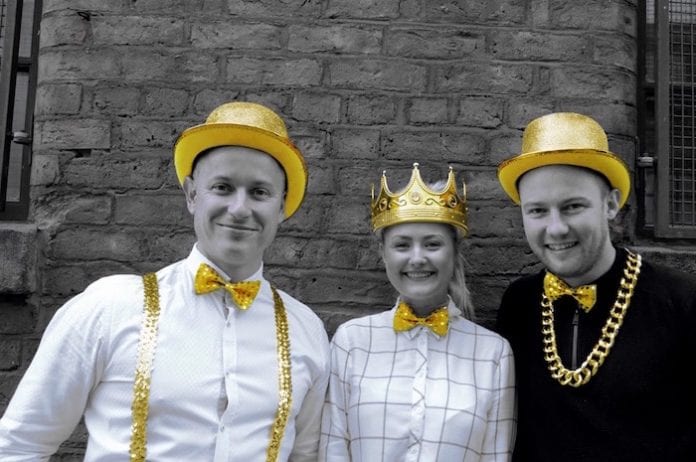 Thousands of people are expected to line the streets of Manchester city centre on Monday to cheer on the heroes of the Rio Olympics and Paralympics with local schools announcing that they’ll be letting pupils finish early to catch the start of the parade.

Now Manchester-based creative film house Magnafi is encouraging people to dress in gold clothes as they line the streets, paint their faces with gold face paint and get involved in a range of gold themed activities happening all over the city throughout the day and during the ceremony.

#GOGOLDMCR is designed to show the world how proud Manchester is of its Olympic and Paralympic heroes and to inspire the city’s younger generation to get involved in sport.

Proud Mancunian, passionate sports fan and CEO of Magnafi Simon Lewis didn’t want this momentous ceremony to go unnoticed so he came up with the idea to turn the city gold for the day to mark the occasion.

“The spotlight will be on Manchester for the Olympic and Paralympic GB homecoming ceremony so let’s get everybody together to turn this fantastic city we call home GOLD for a very special day,” said Simon.

“This will be the biggest gold-themed fancy dress party in history. It’s a bit of fun to show our sporting heroes just how proud of them we are and to show the watching world that in this city anything is possible.

“Celebrating these modern day role models in the age of reality TV stars and 15 seconds of fame is hugely important in inspiring kids to believe that real people can achieve amazing things in sport if they put their minds to it.

“For me, that’s the most important part of all of this  – inspiring kids to be proud of Manchester, of the North West, and of how with belief and hard work, anything can be achieved. There are people right here in our city, on our doorstep, our neighbours, who have achieved worldwide success and we should all celebrate that.”

Johnny Vegas is fronting the campaign. He has made a video to rally people into getting involved and has donated his fee to the Paralympics GB fund.

Prizes for the best dressed are being donated by Sofology, Music Magpie, BetFred and many more. Other businesses involved so far include Spar, San Carlo, Tattu, The Birdcage, Spinningfields, Media City and Key103 who will all be going gold and encouraging their customers to do the same with special gold–themed activities happening throughout the day.