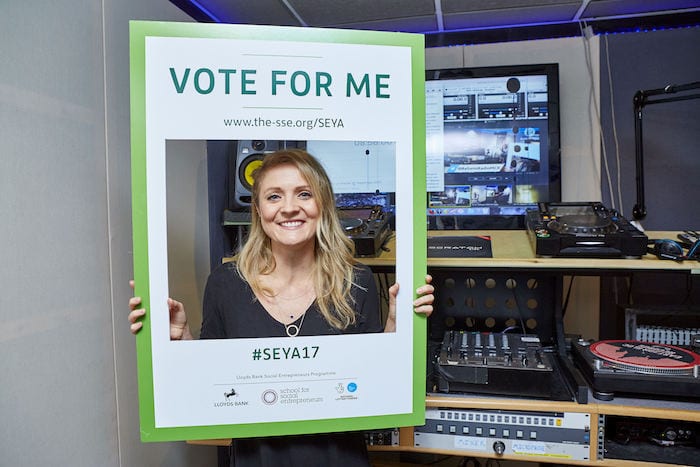 The founder of an online radio station that broadcasts the best in music, arts and culture as well as helping young people get back into work has been shortlisted for a prestigious award.

Rachel Roger, 30, is one of five people in with a chance of winning the Lloyds Bank’s Social Entrepreneur of the Year 2017 Award and £10,000.

Rachel is founder and director of Reform Radio, a social enterprise which helps 18-30 year olds develop their skills.

It’s the home of features like Into Continental, a weekly show where Dr Mystery (aka Natasha Maximova) reveals the musical diversity of different countries, the That’s What She Said show and The Takeover.

It has evolved from an idea back in January 2013, starting with a pilot project supporting five young adults into work and continued with a creative writing project in the summer of 2014.

Now it’s a huge enterprise which has involved over 220 volunteers and supported at least 40 young adults into work.

More than 3350 hours of graft later, Reform Radio gone on to be voted one of the top 20 Mixcloud stations in the world.

“Winning the Social Entrepreneur of the Year Award 2017 would be fantastic for Reform Radio,” says Rachel. “The money would enable us to employ a pastoral support worker, making sure that no young person leaves Reform Radio without the integral support that they need for a better future.

More than 200 social entrepreneurs applied for the programme, with only 40 gaining a place.

This was part of a competitive application process and a Dragons’ Den-style panel, with the judges then picking five finalists to run for Social Entrepreneur of the Year 2017.

If you would like to help Rachel win the top prize, voting is open at www.the-sse.org/SEYA until 31 October. To vote via text message, text ‘SEYA17 [RACHEL]’ to 82228. Texts are free.