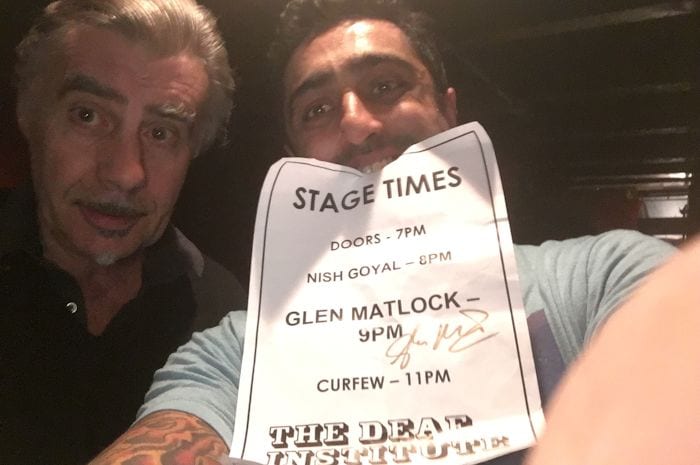 The Sex Pistols’ connections with Manchester have been well documented over the years.

Their legendary Lesser Free Trade Hall gig in 1976 was attended by Morrissey, Peter Hook, Bernard Sumner, Mick Hucknall, Mark E Smith, Pete Shelley and Howard Devoto, and is widely regarded to be one of the catalysts that sparked the Manchester music scene.

And one of the band’s first TV appearances was on Granada TV’s So It Goes, hosted by ‘Mr Manchester’, Tony Wilson.

Glen Matlock was one of the founder members of the Pistols and co-wrote most of the songs on Never Mind the Bollocks, Here’s the Sex Pistols, including God Save The Queen and Anarchy in the UK.

When he returned to Manchester recently to play at The Deaf Institute, it was almost 40 years to the day the band made their infamous TV appearance on Bill Grundy’s Today show and performed at the Lesser Free Trade Hall.

His set at The Deaf Institute featured a selection of tunes from his extensive back catalogue built up over a career spanning 40 years, and went down a storm.

Earlier in the day, Glen took part in a special in-conversation event for students at the BIMM music institute – the largest provider of contemporary music education in Europe – and one lucky student got to provide the support at his Deaf Institute gig.

Nish Goyal, a student of songwriting at BIMM, whose alumni include George Ezra, Tom Odell, and The Kooks, is a huge Pistols fan and jumped at the chance of supporting the punk pioneer.

“I’d listen to Never Mind the Bollocks as a kid in school and never dreamed I’d ever get to meet – let alone support – Glen Matlock!” said Nish. “It was such a fantastic opportunity for me – it’s not every day you get to meet one of your musical heroes!”

Nish blends elements of punk, folk and indie with witty lyrics about his traditional Indian upbringing, modern life and being angry. His first single Get Started was released in July 2015 followed by Save the Day in September that year.

He recently signed a one album deal with a small indie label in Portsmouth called Coffee Jingle Records and can be found gigging regularly at open mic nights in Manchester and London.