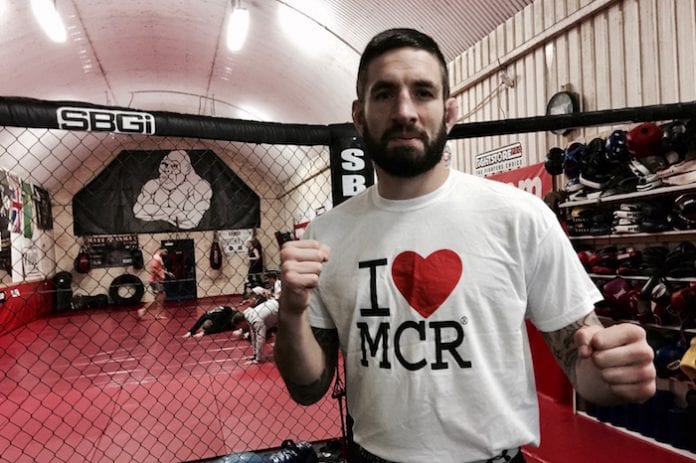 Manchester mixed martial arts fighter Matt Inman is to take on Karl Amoussou for at crack at the Cage Warriors welterweight title next month.

Matt, who was a Manchester law student before he decided to switch to professional mixed martial arts, is based at Straight Blast Gym (SBG) Manchester near Piccadilly, where he has trained under head coach Karl Tanswell for the last seven years.

He goes into the bout with the Frenchman with 19-8 record, including six wins from his last seven bouts. Amoussou has a career record of 23 wins, seven losses and two draws but his recent form is even more impressive – six fights, six wins and six finishes.

Matt’s most recent fight on Cage Warriors Unplugged in November was voted fight of the year.

Following the win, Matt took to social media stating his intention to either be signed for the next UFC London card or get a Cage Warriors title fight. Just a month later, a title fight is what he got.

The title fight at the O2 Indigo on February 18 is his biggest fight to date. A win would enable him to switch to UFC and follow in the footsteps of Conor McGregor who started his career in Cage Warriors before going on to become the first simultaneous two-division champion in UFC history.

“Winning the Cage Warrior title would be huge in terms of my career,” says Matt, who is sponsored by I Love Manchester.

.@mattinman86 is looking good ahead of his Welterweight Title fight at #CW80!👌 pic.twitter.com/qWMwSN6g3f

“Cage Warriors has become a really big platform. Winning that belt – and being up there with guys who have been Cage Warriors champions before – would be exactly the step forward I have been looking for in my career.”

Cage Warriors 80 will be broadcast live on BT Sport. The show will also stream live on FightPass (UFC.tv), the UFC’s online subscription service which has approximately 450,000 subscribers worldwide. For more information about the Cage Warriors card click here.