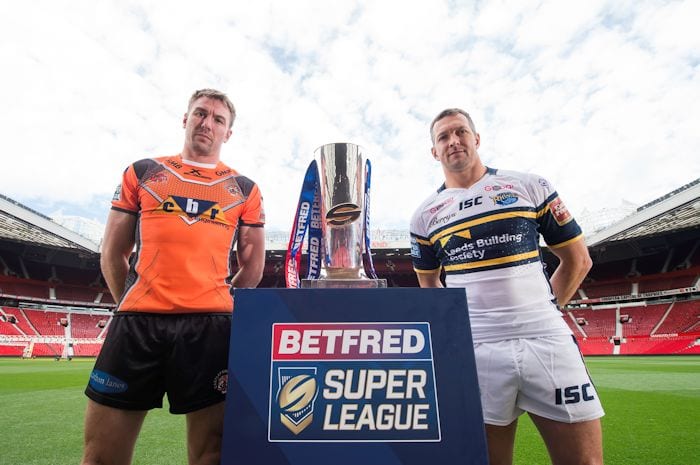 More than 90,000 fans will pour into Manchester on Saturday for one of the city’s biggest sporting nights of the decade – and neither United nor City will be involved in the action.

There’ll be Rhinos and Tigers battling it out at the Theatre of Dreams before a sell-out crowd whilst a local boxing hero battles it out in a must-win British lightweight fight at the Arena.

The climax of what has been described as Rugby League’s best ever season – the Betfred Super League Grand Final 2017 – will be played out between runaway league leaders Castleford Tigers and seven-times winners of the trophy, Leeds Rhinos.

Over at the Arena, Manchester’s Anthony Crolla faces Ricky Burns  – both former world champions – in front of 20,000 partisan supporters. 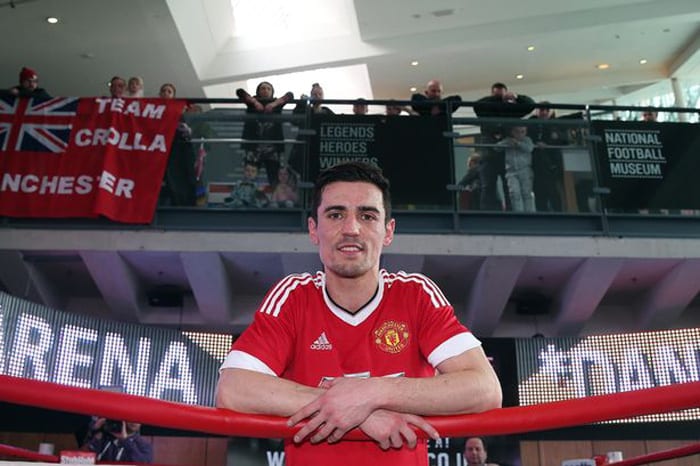 The build-up to the two huge events collided when Crolla, a big fan of Rugby League, arrived at the Super League press conference at Old Trafford on Monday and looked forward to his own task ahead.

He said: “We’re now in fight week and all the hard work is done. I had the last bit of sparring yesterday. I believe I’m a better fighter after the two huge fights with Linares and on Saturday night I know I have got to be at my very best.

“I am fighting a three-weight world champion, a fantastic fighter, and I think our two style can’t help but gel and it will get to be a fantastic fight. Neither of us want to be dropping down, but that’s what the loser would do, so there’s an awful lot at stake. The winner will be almost guaranteed another world title shot.”

Castleford Tigers may have never won the Super League but they start Saturday night’s crunch match clear favourites, finishing ten points ahead of their opponents, Leeds Rhinos, at the end of the regular season.

And last March the Tigers blew the Rhinos away, beating their West Yorkshire rivals 66-10, the biggest of four victories over Leeds during the season.

Executive director of Super League and former chief of Warrington Wolves Roger Draper reckons the 2017 season has been one of the best ever seasons for Super League.

“There’s been last minute drama throughout – it’s been fantastic – and a lot of young British talent has come through. The future of Super League is very bright.”

As of Monday, 60,000 tickets had been sold for the match and the remainder are expected to be snapped up by Thursday.

“We’ll be able to announce a sell-out. It has all the makings of an absolute classic,” said  Draper.

Castleford skipper Michael Shenton says his team are relishing their Grand Final debut- made more special by the fact they are playing neighbours Leeds Rhinos.

“This is a special place,” he said of Old Trafford. “A few of the boys have never seen this place before so straight away you can tell this is something special. We are ready. We are massively excited and we have achieved so much this year.

He said the Tigers, putting out a full-strength side, would pay no heed to the form book but instead focus on what they do well and their attitude going into the game.

Leeds coach Brian McDermott confirmed that England international back row forward Stevie Ward has been ruled out after dislocating his shoulder. Asked whether the Rhinos, as underdogs, had a game plan, McDermott replied: “No. When you get punched in the face any game plan goes out of the window.”

Saturday night’s clash of the Rugby League titans – the first all-Yorkshire clash for 12 years – will be the 20th Grand Final to be staged at Old Trafford.

Draper is delighted to have signed a new contract to keep the sport’s premier domestic event at the Reds’ 75,000 seat stadium until at least 2020.

The Super League signed a sponsorship deal with Betfred a year ago. Since brothers Fred and Peter Done opened their first shop in Salford in 1967, Betfred has grown to become the world’s largest independent bookmaker, with over 1,300 stores across the country.