Can you buy a Michelin star? Well the team behind Living Ventures are throwing everything behind their quest to bag one of the coveted stars for the city with the launch of the uber-glam Manchester House this week and we had a sneak preview.

And you can see the other upmarket eateries in town are somewhat, well how to say this politely, bricking it.

On the same day the much trumpeted Manchester House was launched, the Midland fought back going on a different tack with a more accessible version of their Michelin contender (The French), with the launch of Mr Coopers (we would bring you that story later but couldn’t really tell what was happening at the launch which was a melee leaving us both hungry and thirsty). 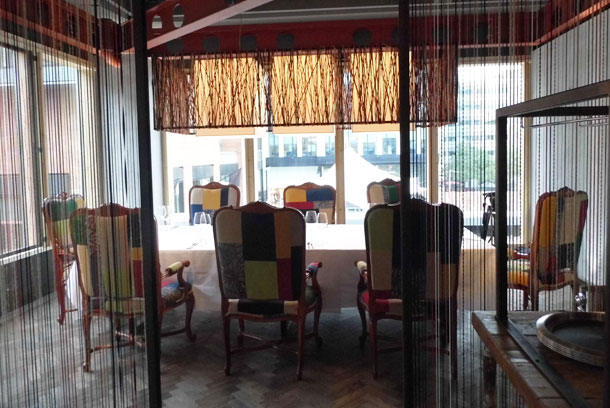 And next week, Cloud 23 at the wobbly Hilton are launching a new menu they have done platters in the past but not ‘proper food’, though David Gale told us as we were gadding about town, that it might be delayed because of a leek. We also have Saturday morning hangover chef James Martin opening at 235 on Tuesday.

I don’t know, you wait all year for some top notch fodder and then suddenly 95 million all come at once.

But back to Manchester House and their recipe for success. There are 24 chefs and only 76 covers so you do the maths. Head honcho is Aiden Byrne who’s pedigree includes The Dorchester and The Church Green, Lymm. They’ve spent £3million kitting it out with 350K on the kitchen alone.

The service is impeccable and a tray of delicious canapés set the scene for what was to come, with a beetroot macaroon and foie gras sandwich that was just to die for or as Turks succinctly put it ‘I need that in my life’.

So far so good, but not screamingly different to what we’ve already seen in Manchester but then the show really starts. 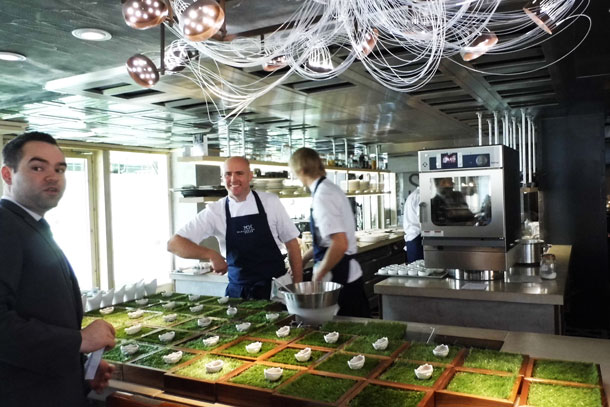 We were whisked down to the restaurant and as Mr Bacon (founder and general Living Ventures Big Cheese) is fond of saying, this is a ‘game changer’.

“…how you imagine Steve Jobs and Apple would make a kitchen cool.” 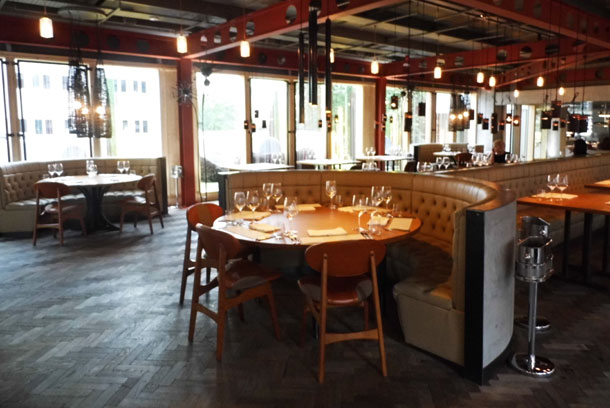 The terraces here are lawned and adorned with enormous wicker chairs that you never want to get out of. Just stunning and however much you might not want to be seduced, there is absolutely no way that it’s not love at first sight – at least with the setting. 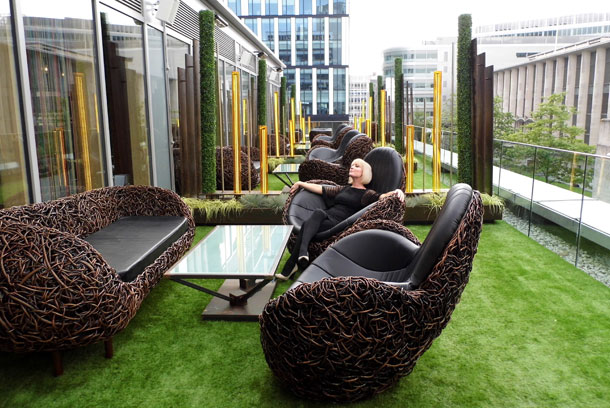 We were being treated to highlights from the a la carte menu, starting with carrot butter and cracker bread which sound poncy and cheffy, but was rich and heart-cloggingly good.

Then followed an oyster that had been fed beetroot and was blushingly pink served with an oxtail consume on a bed of grass that our lovely waiter Paul then drenched in a dry ice type sea mist, to give you the scent, smell and flavour of the sea. 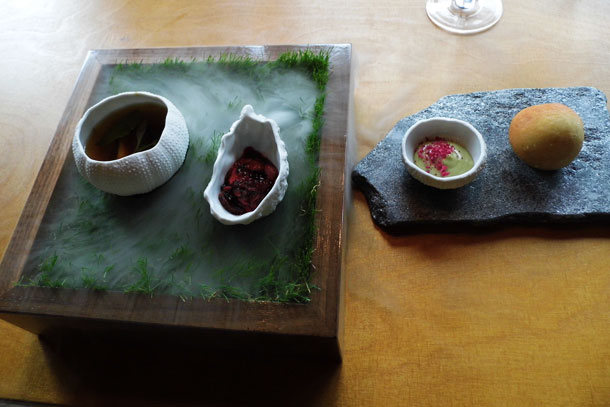 Not sure I got all that, but this was a gorgeous and achingly tasty appetiser, superbly accompanied by a sherry that I wouldn’t normal touch in a million years but worked so well with the plate.

Roasted pigeon followed with black cherries, one of which was filled with foie gras and burst on your tongue like the best surprise in the world. Served with pistachio, this was a great dish and again, may sound pretentious (at this point I’d dared Turks to ask for salt and ketchup) but it really isn’t, just great food. 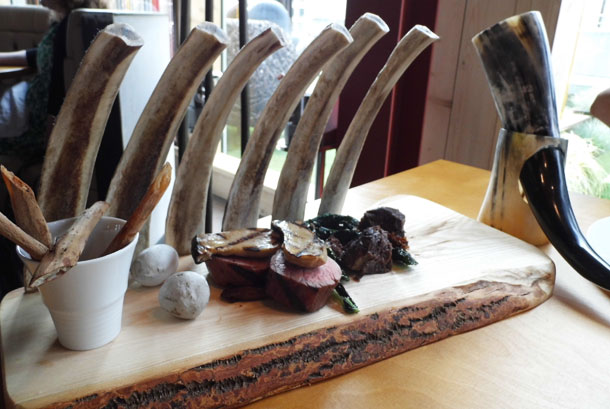 Bacon brioche with pea butter and a pea juice was perfect to cleanse and refresh but the following prawn cocktail (why do people insist on messing with prawn cocktail) which came with a huge big bubble of what tasted like a solero, was too tart and sour for my taste.

But then the best dish came, Welsh black beef which with huge ribs sticking out, a knife that looked like something out of Crocodile Dundee and the best bit – a horn, yes a horn, of truffle oil. OMG, heaven. In fact Turks and I sounded like we were re-enacting When Harry Met sally with our moans and groans.

Dessert, appropriately, was their take on Manchester tart but so much better, with coconut flavouring and jelly that squished in your mouth like a sweet rhapsody. 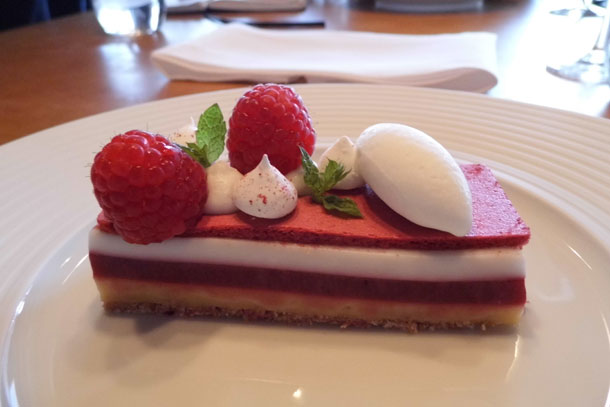 We had been quaffing different drinks throughout, matched to the morsels, highlights of these were a Pinot Noir and a superb rose.

At these prices for the standard of the food it’s a steal but does it do more than Abode/Hilton/The Lowry. I’m not sure it does. It is on a par, definitely and can hold its head high among these peers, but will it get that star?

“…they turned down Mr Byrne’s suggested name of Scouse House…”

We heard from Mr Bacon who told the throng of foodie journos (including a BBC crew) who said what had startled him most in his 23 years in the city (he’s an adopted Mancunian from the land of Oz) was the “Lack of traction that fine dining has had in the city. Lots have tried and failed, hopefully not with this.”

Mr Byrne who hails from Liverpool (apparently they turned down his suggested name of Scouse House), told the masses how he had torn up his recipe books to devise the menu.

“For every dish you see on the menu, there are five in the bin and they’re not coming back,” he said.

He also praised fellow Michelin contender Simon Rogan at the Midland saying: “We are a million miles away from each other in terms of cooking, but we support each other and having both of us in Manchester is just going to raise the bar even higher.”

We will be back to do a proper review and one at Mr Cooper’s, in the meantime, the race for that elusive star is well and truly on.