Manchester home beer brewers: out of the kitchen and into the brewery 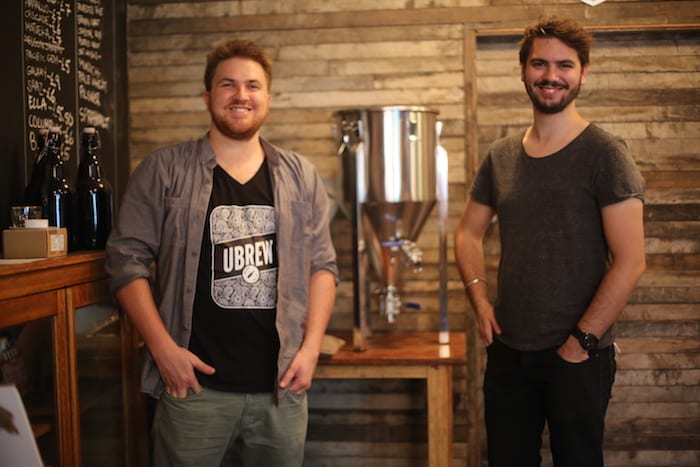 Fancy the idea of brewing beer without the hassle and expense of buying a brewery? Read on.

The traditional image of homebrewers stereotypically involves a messy kitchen, lots of damp on the walls and, usually, one unhappy spouse. But UBREW did things differently. Starting out as humble beer enthusiasts, they dreamt of a co-working style space for brewers and before they knew it, they’d set up on the Bermondsey beer mile in London. If your Mancunian beer loving eyes are turning green with envy, fear not, because they’re coming to Manchester.

A beer co-working space doesn’t create itself. It takes a lot of commitment and number crunching.

“It started as a few late nights drawing up the model over beers and hammering out the finer details,” says co-founder Will Horsfall.  “Me and Matt then filmed a crowdfunding video to pre-sell memberships while the whole thing was still just an idea. From there the real work began – building the brewery itself in time for launch.”

Manchester is a craft beer heavyweight at the moment with an incredibly dense concentration of micro-breweries and bars, making it the natural follow-up to UBREW’s London site.

“Manchester is a natural progression. London and Manchester both have some of the UK’s most exciting breweries in the country at the minute, and it made perfect sense to jump aboard. From those earliest days of the two of us pulling late nights in the office figuring out what UBREW was going to look like, Manchester was on the hit list of cities to move into quickly.”

As we make our way though the first Manchester Beer Week, it’s easy to get carried away about this city’s obsession with craft beer. But is there room for any more brewers? “Well, we only need to look to London to get an idea of what that will be like. There’s power in numbers, and we lend each other bottles, use of our equipment, ingredients, and even hold events with each other. We’ve already had the guys from Marble sign up for a membership with us, so I would say that’s a great sign!”

And what about these homebrewers, will they be looking to sell their finished product? “You’ll have to ask them, but my guess would be yes. UBREW London is an HMRC registered brewery, and as long as members fill out all the right paperwork for the excise and duty guys, they have the legal right to sell their beer to whoever they want. Our members in London sell their beer to us and bottle shops and bars all over the place.”

So theoretically you can brew beer without the hassle of buying a brewery, kind of like what Shindigger have done, known as gypsy brewing. So how much can you brew?

“You can brew 80 bottles of beer a time, and realistically you can get 2-3 brews a month in. As above, as long as you register with HMRC you’re perfectly able to operate as a commercial brewery, but the vast majority of our members are brewing for personal consumption – all the memberships we sell are group memberships for up to 5 people – so there’s plenty of friends to share the beers with!”

UBREW hit their initial target of 60 super early bird members a couple of days before the end of Manchester Beer Week. Given this initial interest, they’re hoping to pass the 100 market before they open in a Piccadilly railway arch in September.