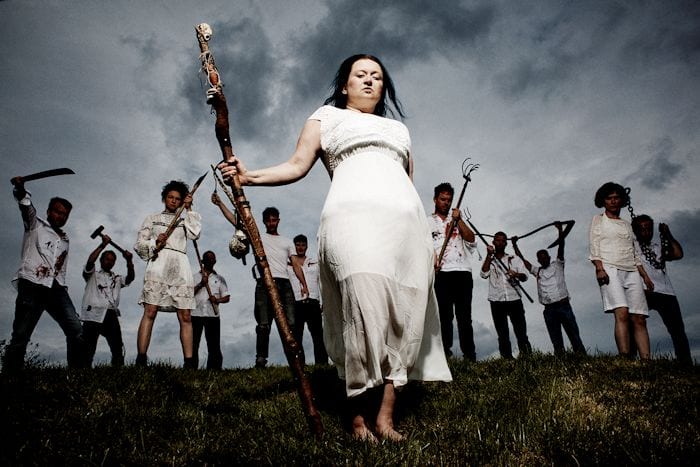 If you thought folk music is just a load of middle-aged men with long hair singing with a pint of real ale in one hand and a finger in one ear, think again.

Because Manchester Folk Festival is bringing everything from intimate traditional gigs to fun-fuelled big performances to a number of city centre venues this month, including live music, ceilidhs, singarounds and a massive Expo.

From punchy punk inﬂuences to soft traditional song, the festival oﬀers something for everyone.

Highlights include Billy Bragg bringing his new album tour to the festival, a performance by alternative band This Is The Kit and an appearance from 70s folk rock legends Lindisfarne.

Award-winning musician Eliza Carthy and her 11-piece Wayward Band will perform at a unique pop up venue in the Great Northern Warehouse on Friday 19th October, whilst vocal harmony group The Wilsons will perform a special afternoon concert at HOME.

For fans of something a bit more raw, Xtra Mile Recordings are putting on a gig with gusto on Thursday 18th October at the O2 Ritz, bringing together cult performer Beans on Toast, folk rock powerhouse Skinny Lister and much-loved folk singer Will Varley. Time to put the venue’s legendary bouncing floor to the test.

The festival also hosts the English Folk Expo at HOME, a showcase for the national and international music industry which promotes the English folk, roots and acoustic music scene.

Following last year’s partnership with Prince Edward Island in Canada, for 2018 the festival’s international partner is Wales. A number of Welsh artists are featured including award-winning 9Bach and a highly-anticipated collaboration between two adventurous musicians: Welsh harpist Catrin Finch who is coming together with Senegalese kora player Seckou Keita.

Following on from a highly successful debut in 2017, this year’s festival will take place across five main locations: HOME, Gorilla, The Great Northern Warehouse, The O2 Ritz and the Anthony Burgess Foundation, showcasing a selection of bands, live music, hands-on workshops, and a huge celebration of folk tradition.

“Inviting the most exciting artists in folk today to play in the city’s vibrant and culturally signiﬁcant music scene, Manchester Folk Festival invites audiences to leave their preconceptions of folk behind and experience this powerful and diverse genre in new and inspiring way,” says festival producer David Agnew, who also is the artistic director of The Met and Ramsbottom Festival.

And it’s not just about music. Bookable craft sessions are taking place at the Anthony Burgess Foundation, including spoon carving and leather belt making, whilst other activities include a Sacred Harp singing workshop at HOME. It’s free and open to all on Sunday 21st October.