Manchester’s Exchange Square has had a revamp to the tune of £823,000

Manchester’s Exchange Square has had a revamp after council bosses oversaw a design update to the tune of £823,000.

Its new look fountain was revealed last night, and is now lit with colour-changing LED lighting. It is also animated with water jets and now runs through a 15-minute chase, dance and wave sequence between 7am and 11pm.

The new design pays homage to the original, first completed in 1999 as part of an initial transformation of the square. Its energy-efficiency has also been improved, as has its resilience to damage. 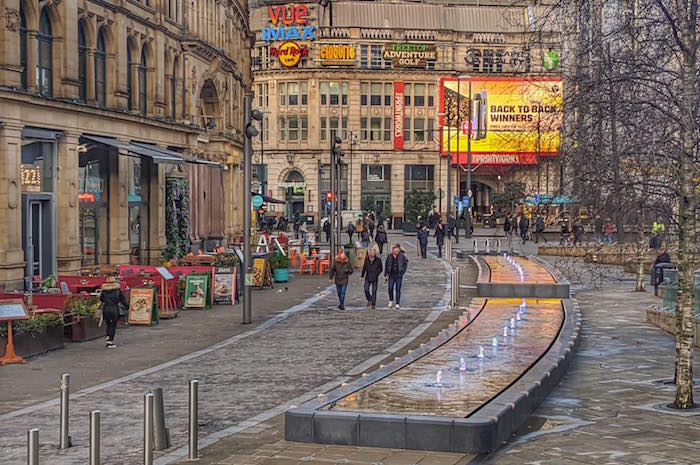 The taps at the top of the water feature have been retained and restored, as have sections of the original slate stepping stones.

The stones, however, have been inlaid and bonded into three raised plinths and set within a surrounding of granite to invite visitors to sit and drink in the new scenery.

It is hoped the new design will minimise levels of debris entering the filter system and reduce damage that was being caused to the original stepping stones s a result of people walking over the feature.

New pumps and filters have also been installed to save energy and reduce the need for ongoing maintenance. 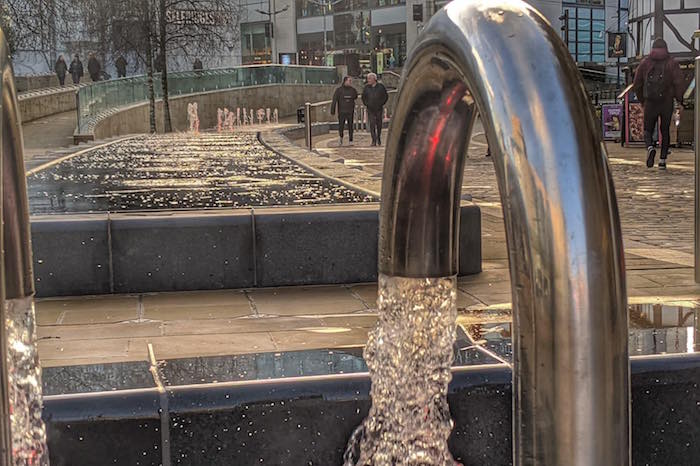 Speaking on the new feature, Councillor Angeliki Stogia, Manchester City Council’s executive member for the environment, planning and transport, said: “Exchange Square is a great public space and has long been a focal point for local businesses, events and visitors.

“The attractive water feature has always been a big part of what makes it stand out and this revamp will help to secure its long-term future.

“This investment in the look and feel of the Square will help it to continue to serve Mancunians and our many visitors from around the globe, acting as a thriving place where people enjoy spending their time and a key hub of economic activity, supporting thousands of city centre jobs.

“I’d like to thank CityCo for supporting this scheme and local businesses for their patience while the work was carried out.”