2019 marks the 10th anniversary of one of Manchester’s most popular Easter traditions, as the Duck Race returns to New Bailey for Good Friday.

And to celebrate a decade of races, its organisers have planned some special surprises this year – including celebrity guests, stilt walkers, family-friendly fairground rides, music and entertainment from Smooth Radio, and mouth-watering food stalls.

The free event takes place between 11am and 4pm on Good Friday (19th April) and will see families and local businesses lining the banks of the River Irwell at New Bailey to cheer the rubber ducks on as they paddle their way to the finishing line.

Some of the more memorable ducks from previous years include Count Duckula, Tim Beake and Kim Karduckshian – and this year’s entrants look set to be even more spectacular, as companies across Manchester hone their creative skills to decorate their giant ducks.

And whilst the giant ducks in the race are sponsored and dressed by local businesses, families can also take part in the fun by buying smaller ducks online in advance or in person on the day for just £1, with all proceeds going to children’s charity Brainwave.

Over the past decade the Manchester Duck Race has raised almost £200,000 for Brainwave, which helps children with disabilities and additional needs achieve greater independence through a range of educational and physical therapies.

“This event is such a fantastic fundraiser for our charity,” said Carole Headley, development manager for Brainwave.

“Never in a million years did I think I’d be able to say that after 10 years of racing rubber ducks in the River Irwell we would have raised almost £200,000 pounds, yet here I am and we’re humbled and grateful to everyone who has supported us and continues to support us.”

“I’ve seen first-hand just how valuable Brainwave is to families who are in need of support for their children and have met a truly inspirational lady who has gone through the Brainwave programme and gone on to reach her true potential,” said Julian Smith, managing director of event sponsor Bathroom Takeaway.

As a business, we pride ourselves in giving back to the local community and are delighted to continue our support to Brainwave and the Manchester Duck Race.”

The anniversary year of the Manchester Duck Race also marks 10 years since The English Cities Fund – a development company set up by leading regeneration and investment organisations to transform urban areas – submitted one of the UK’s largest ever planning applications to deliver the ambitious 50-acre Salford Central regeneration programme within which New Bailey sits. 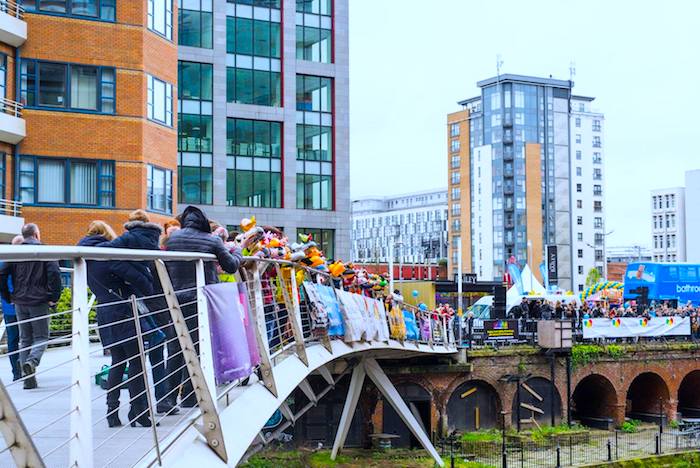 New Bailey is currently at a monumental phase in its development, with four projects currently under construction including office schemes Riverside House, Two New Bailey Square and Three New Bailey, as well as the third phase of residential development at The Slate Yard.

“This is our third year supporting the event and it’s always fantastic to see so many people getting involved – it’s become a real highlight in the city’s Easter celebrations,” said Phil Mayall, regional director at The English Cities Fund.

“With both the Manchester Duck Race and New Bailey reaching significant milestones this year, we’re looking forward to showing people how much progress we’ve made in the last 12 months alone, along with striving to raise as much as possible for Brainwave, which is such a worthwhile charity.”

The event will take place along the River Irwell at New Bailey on 19th April.

To purchase your duck or to find other ways you can get involved in the Manchester Duck Race 2019, please visit the Brainwave website via the link below.