Thousands of people lined the streets of Manchester today to welcome back the city’s legendary Manchester Day parade after a two-year absence due to Covid.

With more than 1300 participants headed by a Queen Bee (this is Manchester of course!) riding high in a Gondola, the spectacular parade – the length of ten football pitches – snaked its way through the city cheered on by crowds of spectators. 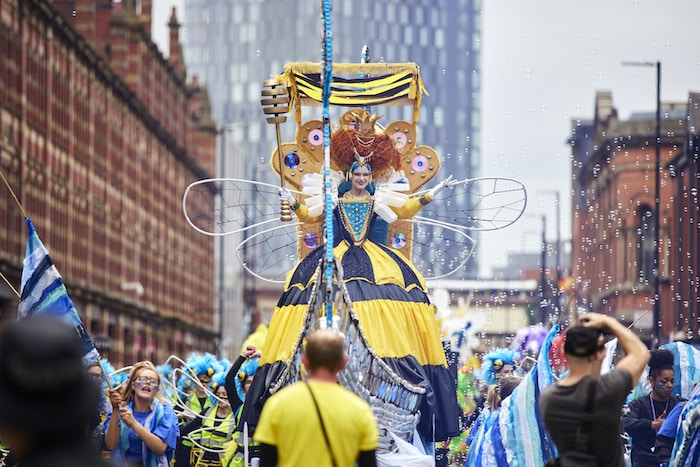 Outdoor arts specialists Walk the Plank, working with the City Council and Creative Director Dan Potra, pulled out all the stops to make sure this year’s parade was one to remember, with 896 dancers, 298 musicians, and 50 different community groups – many of them in traditional costumes – creating an instant carnival atmosphere for all those who turned out to watch. 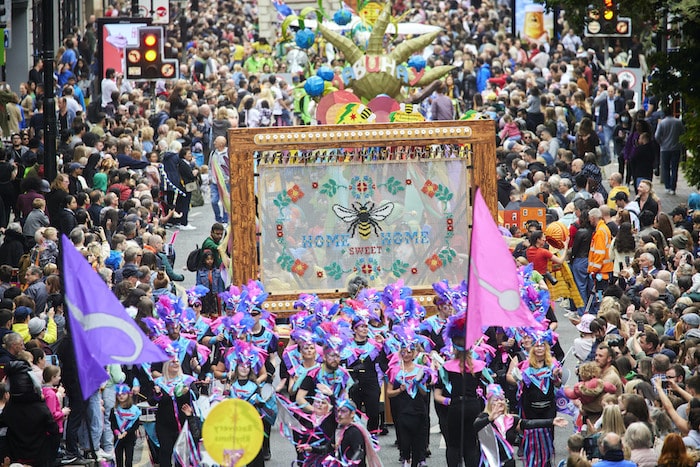 With little pigs in their houses, wolves, bog bush crickets, seals, seagulls, and plenty of buzzing bees thrown into the mix, the parade was full of surprises that delighted the crowds.

Other highlights of the parade included an enormous pram complete with bouncing babies boogying to the beats: a replica of the Manchester Town Hall clock telling the story of the Pepper Moth that evolved to survive the Industrial Revolution by changing from a speckled grey and white to black – the colour of the soot-filled buildings on the city during the early 1800s, before changing back again to its original speckled form as the air in Manchester became cleaner; a train full of holidaying horses, pulled by an engine powered by human cyclists; and the iconic Manchester railway arches, reimagined as gardens in the sky. 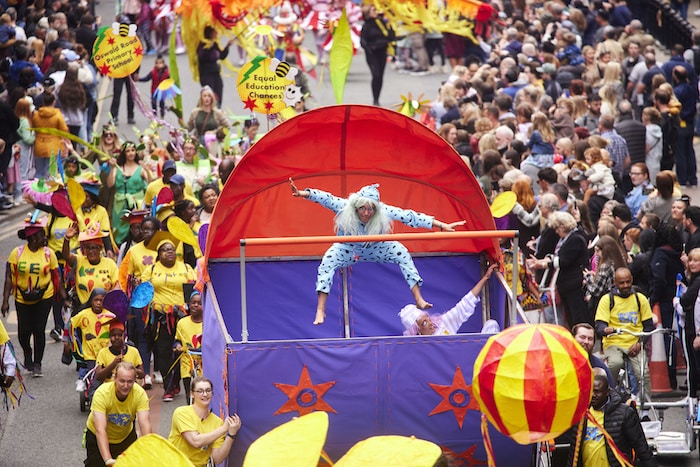 Manchester also welcomed, for their very first Manchester Day, a very special young guest who recently made her home in the city after an epic 8,000 km journey through Turkey and across Europe from Syria

Little Amal – the 3.4-metre high puppet of a Syrian girl refugee who arrived in Manchester last summer – was already out and about in the city centre taking in all the sights and sounds of the city when she stumbled upon the unforgettable annual parade as it made its way through the city streets.

The spotlight for the return of Manchester Day this year was firmly fixed on children and young people as part of the city’s year-long 2022 Our Year campaign and as Manchester works towards becoming a UNICEF recognised child-friendly city.

Young people played a big part in all aspects of the day. As well as helping make some of the fantastic costumes and parade floats, taking part in the parade itself, singing, dancing, and helping to choreograph it, young people were also given the special job of curating all the activity for the day in the city’s Piccadilly Gardens. 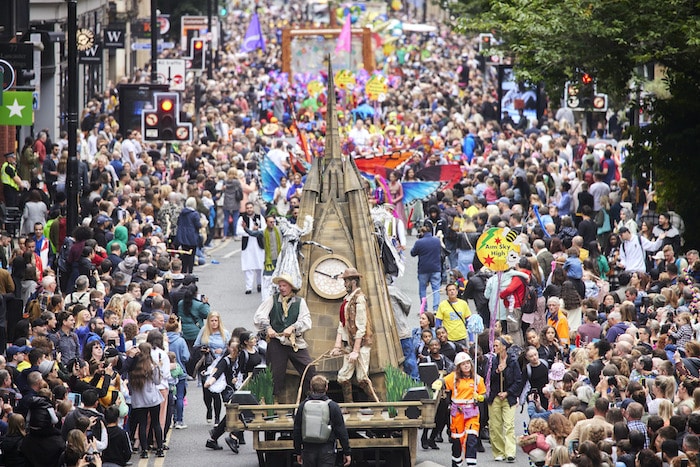 They programmed an epic day of sounds, moves with street dance and soulful acoustic sets, to urban-positive rapping, an Instagram wall for picture-perfect snaps, and a graffiti wall, alongside sports sessions.

“We never dreamt during all the lows of lockdown that we would come roaring back with 20,000 people in town for Manchester Day,” said Councillor Pat Karney, Chair of Manchester Day.

“Once again, celebrating our amazing city and enjoying our iconic Manchester Day Parade. Manchester hugged itself today – and it was sensational! So good to be back!”