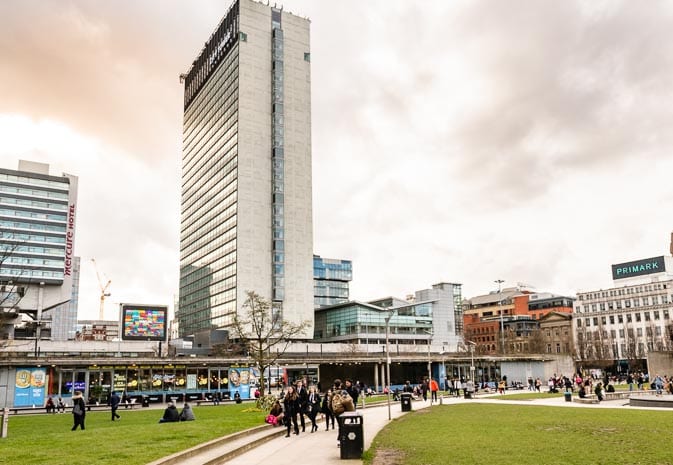 Piccadilly Gardens, Manchester city centre’s most controversial open space, is set for “improvement” – but the detested concrete wall, second only to begging on Mancunians’ hate list, is going to stay.

It could still be standing when our grandchildren’s grandchildren are alive, though the council proposes to hide renowned Japanese architect Tadao Ando’s brutal creation with “greenery”.

The wall is part of the so-called “Pavilion” standing between the gardens and the Metrolink stop, which is owned by the council but leased to LGIM Real Assets (Legal & General) for 250 years.

The free standing bit of the wall WILL, however, be removed.

Town hall bosses, responding to massive public negativity over the state of the city centre’s biggest open space and the lack of progress on improvements, are now set to commission landscape architects to draw up designs for improvements to the whole Piccadilly Gardens area.

A public consultation will take place over the summer with the council strongly committed to improving this heavily-used public space.

Council leader Sir Richard Leese said: “We know that people have strong views about the need for improvements to Piccadilly Gardens. Indeed after begging, the Gardens was the issue which was most raised in last year’s city centre review.

“We are determined to deliver those changes. While the scheme which was previously envisaged has not proved possible in its current form, it is not a case of back to square one. The work which was done on that scheme, and the public consultation which established broad support for the principles behind it, will help shape the revised scheme and give us a sound basis to move forward.

“As part of the council’s proposals for the Gardens, we are looking to see the appearance of the concrete wall to the Pavilion improved and softened. The council’s ambition to see it transformed into a green ‘living wall’ facing the bus and tram stations. We also propose to remove the free-standing part of the wall, which sits within our ownership.”

It was 170 years ago that the Manchester Royal Lunatic Asylum was moved out of what’s now Piccadilly Gardens to Cheadle.

The Royal Infirmary building, which also occupied the site, was demolished in 1910, making way for the sunken gardens with meticulously planted floral displays much missed since the area’s complete redesign at the turn of the millennium.

The redesign of Piccadilly Gardens almost 20 years ago came as the council claimed it could not afford to maintain the space. Lack of footfall though the gardens, which were cut off by traffic on all four sides, meant the space became a haven for winos and drug users.

The then owners of Piccadilly Plaza demanded improvements in the adjacent public realm before undertaking the refurbishment of Plaza itself.

The financial deadlock was broken when the council decided to sell part of the gardens to the developers of One Piccadilly Gardens, the office block now standing on the Portland Street side, to fund the redesign.

But the results were unloved from the outset.