Breaking news - Manchester's Christmas Markets will NOT go ahead in 2020 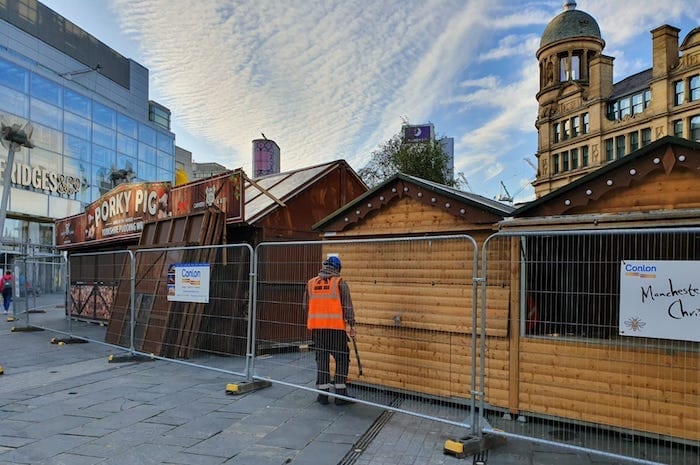 Council bosses have finally confirmed that the annual Manchester Christmas Markets will NOT go ahead in 2020, amid spiralling coronavirus cases across the region and the UK.

The hugely popular festive extravaganza usually runs from mid-November right up until Christmas Eve in December and sees a plethora of food, drink and gift stalls at a number of outdoor sites drawing thousands of people into the city centre.

But with the latest announcement from Prime Minister Boris Johnson tightening lockdown restrictions across the worst hit cities for coronavirus rates, it seemed increasingly untenable that a Christmas Markets event could happen in Manchester this year at even half the levels of previous years.

Other major festive markets and events across the UK had already been cancelled in recent weeks – including in Birmingham, Lincoln, Leeds and the popular Winter Wonderland event held in London.

The council had been keen to hold out as long as possible to explore every option of keeping some kind of festive event in the city, but with the worsening transmission rates of the virus and increasing speculation of even tighter restrictions to come in the winter, it was ultimately deemed not possible for 2020.

There had been hopes a smaller market featuring all local traders could go ahead with limited numbers, but even that was deemed impossible amid the tightening restrictions.

However, the city WILL still be decked in the traditional Christmas Lights across the city – although the council had already announced that a switch on event that had proved popular in past years would not be going ahead for 2020.  The new large LED Father Christmas statue will also return this year.

It’s understood that council bosses are still looking at ways they can help families and shoppers to enjoy the festive season in Manchester – and encourage footfall safely to support local businesses at a time when they need it most.

Cllr Pat Karney, Manchester’s Christmas spokesperson, confirmed the sad news and said everything had been done to try and keep some elements of the markets but it was not to be.

He said: “Unfortunately we have had to take the decision to cancel the Christmas Markets this year. We would never put on an event that would put the health of Manchester people at risk and, following advice from Public Health, we don’t feel we can put on an event that matches our usual world-famous markets while at the same time keeping the public safe.

“I know this will be disappointing to so many people and this is the first time we haven’t had a Christmas Market in Manchester since 1999. Millions of visitors have enjoyed our markets over the last two decades and it has become one of the UK’s most popular festive events, attracting visitors from around the globe. But we know people will understand that we cannot risk the well-being of the public.

“However, we are determined to mark the festive season at a crucial time for the city’s businesses and the festive lights, light sculpture trail through the city centre, and – of course – our giant Santa will return to bring the spirit of the season to Manchester.”