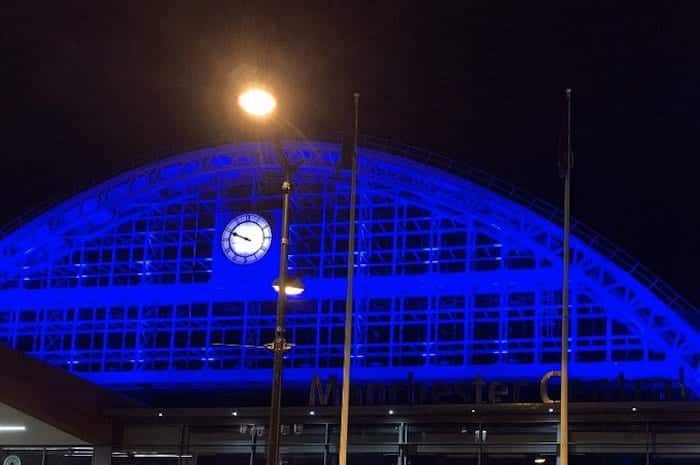 Buildings across Manchester will light up blue tonight as part of a new campaign being organised in support of NHS workers up and down the country.

As medical workers continue to work tirelessly in challenging conditions, with very little safety equipment and testing kits available across the board, the #lightitblue campaign hopes to show a display of gratitude.

All over the UK, buildings including the Royal Albert Hall, Lincoln Cathedral, Belfast Titanic Signature Building, The National Theatre, and Metro Radio in Newcastle will be flipping on the blue switch.

All will be using existing LED technology to ensure the campaign adheres to the critical message from the British Government for people to stay at home.

And in a separate campaign, as a salute to the NHS and the courageous efforts of everyone involved in the nation’s healthcare system, people across the nation will join together in isolation to applaud the NHS and other frontline workers at 8pm.

Following in the footsteps of other countries across Europe, such as Greece, Spain, and Italy, people will clap from their balconies and shine torches to honour medics and auxiliary staff across the country.

The #lightitblue campaign has been inspired by this global clapping movement, says Gary White, who is one of the people behind it.

“We believe the #lightitblue campaign, inspired by the existing #clapforourcarers initiative, will galvanise their enthusiasm and pride in a mass gesture of solidarity,” says Gary.

“The events and entertainment industry finds itself in an unprecedented state of enforced inaction.

“The best thing we can do – apart from staying at home – is to use our skills and networks to say thank you to everyone who is supporting the NHS and risking their own health to help others during this pandemic.

“We also feel a huge sense of responsibility for the mental wellbeing of many people within our industry who, having lost their jobs, are feeling anxious and confused about the future.”

Music legends Toyah Wilcox and Robert Fripp and all three British Superbike brothers – Andrew, Glenn and Graeme Irwin – will be among the celebrities who will be interpreting the challenge from their homes.

“Venues up and down the country have shown great enthusiasm in taking part during Thursday’s round of applause, and we understand some will be continuing their illuminations for days or weeks to come,” says Gary.

The #lightitblue campaign also invites people to join in at home by creating blue-themed images and videos and sharing them online with #makeitblue, and challenging others to follow suit.