A little boy from Manchester who did a 1.5km challenge on his ‘robot leg’ has raised hundreds of pounds for charity.

Leo White is just six years old and has a prosthetic limb. His mum says he is always thinking of those less fortunate than himself and enjoys coming up with new ways to support charities.

Leo used his wheelchair for some of the challenge, but he determinedly stood up so he could cross the finish-line without it. 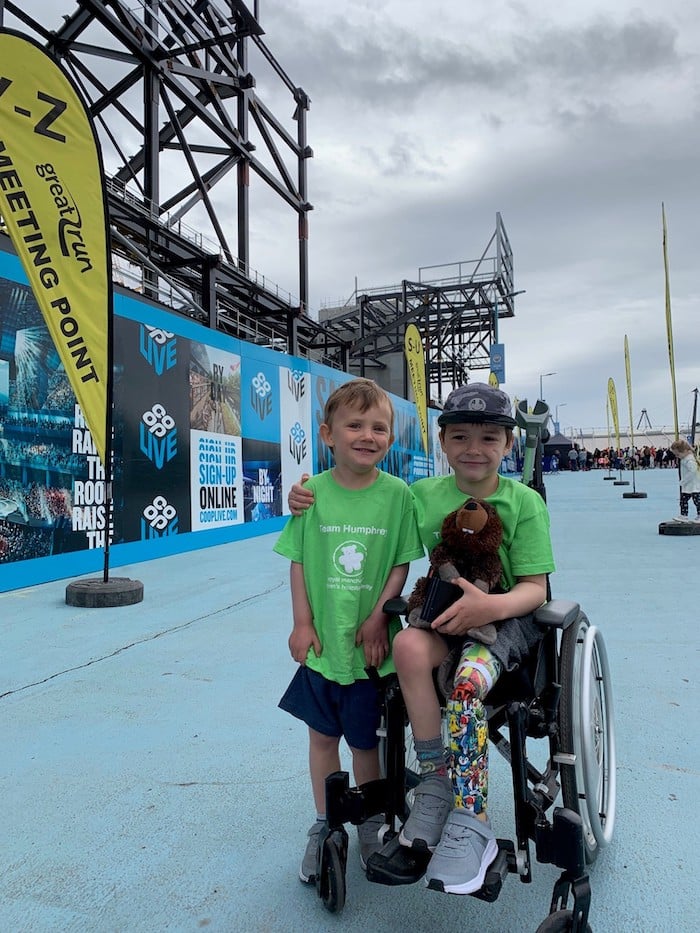 Leo has been a patient of Royal Manchester Children’s Hospital since he was a baby and wanted to do the challenge to help his fellow young patients.

“We saw some charity banners in the hospital and that was the first time we realised there was a charity for the children’s hospital,” said his mum, Claire.

“Leo did a charity challenge last year for LimbPower, a charity that helps people with limb differences, and he is always wanting to put money in charity boxes.

“So when he saw Royal Manchester Children’s Hospital Charity needed participants for the Great Manchester Run he asked if he could do it. 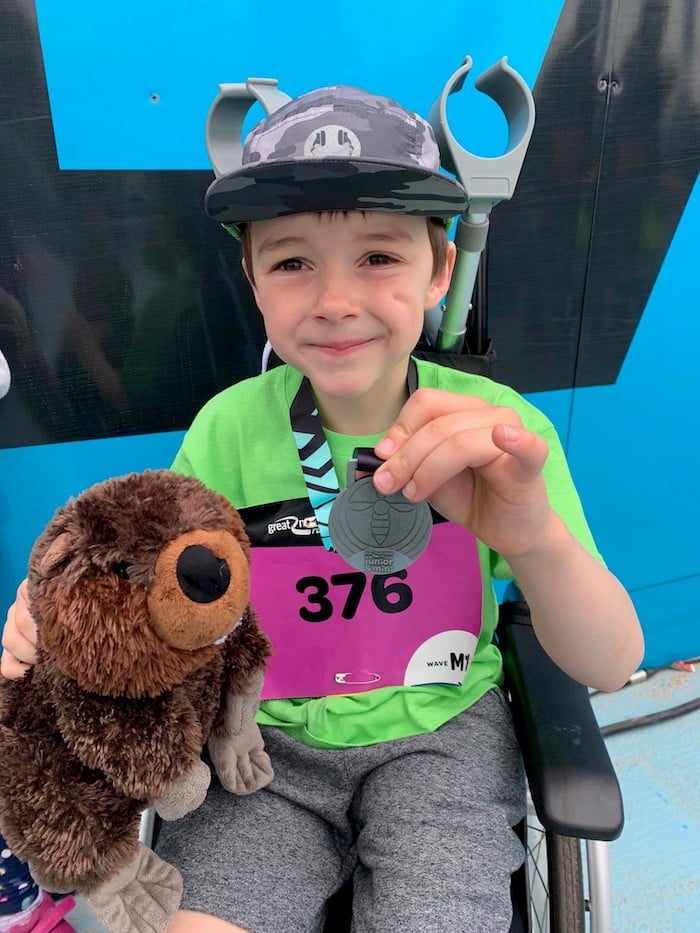 “He was brilliant. I followed behind him with his wheelchair and he jumped in it a few times but he got out to run over the finish-line.

“I’d packed a picnic to eat going round the course as I thought we’d be taking it slowly – that was a mistake! I just ended up carrying it all as Leo and his brother Ashley dashed ahead.

“I was honestly so impressed with Leo and Ashley doing the race and thinking of others.

“But that’s typical Leo – he has quite a bit of empathy for others. When we pass homeless people in the city centre he wants to buy them a sandwich and he gets concerned about other children at the hospital.

“He’s quite grown up for six years old.”

Leo has had two operations at Royal Manchester Children’s Hospital – a foot amputation and a major hip surgery. 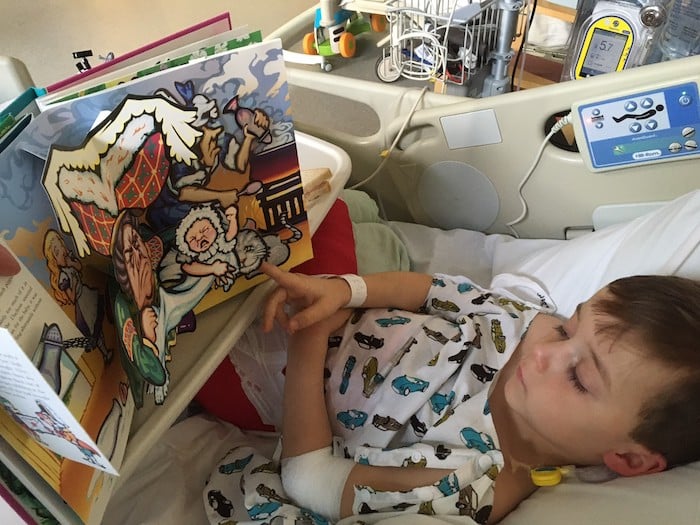 When Claire was pregnant with him, at a 20-week scan she was told Leo’s left leg was 50% shorter than his right.

She was referred to the foetal medicine team at Saint Mary’s Hospital and Leo was born via c-section as he was breach.

Thankfully there were no other complications and he was a healthy baby.

When he was about one year old, the family met specialists at the Specialist Ability Centre and orthopaedic surgeons at Royal Manchester Children’s Hospital, who advised it would be best if Leo had his foot amputated.

“As his left leg was so much shorter than his right, his foot was in line with his right knee and off at an angle,” explained Claire.

“He couldn’t really use it so when he was about 18 months old he had a type of foot amputation known as a Symes amputation. 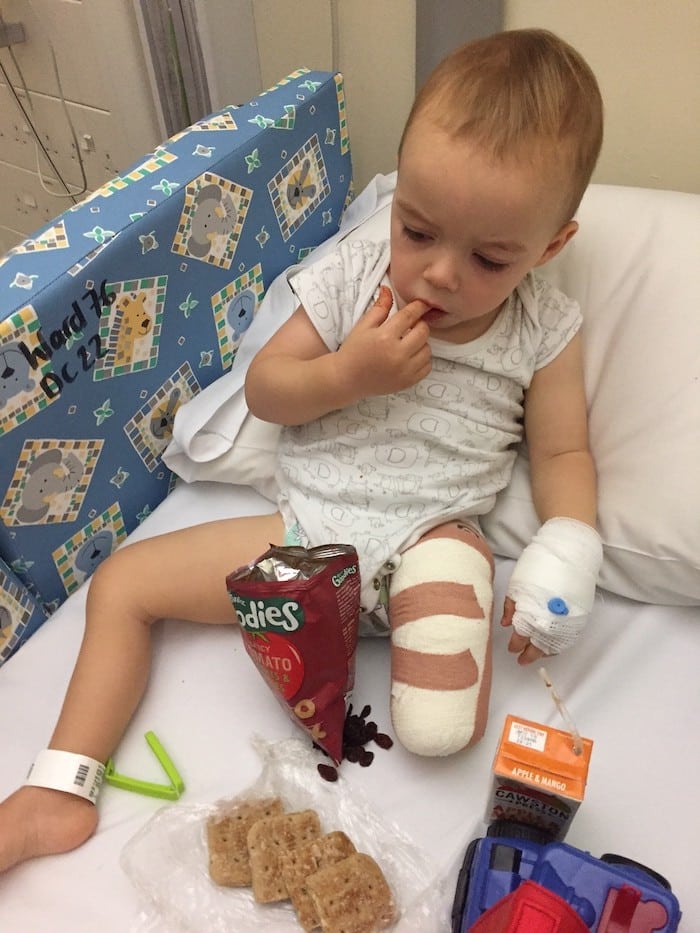 “They took it off at the ankle which meant they weren’t cutting through any bone. The used some skin from his heel to pull over and go over the exposed area.

“At first he couldn’t put any weight on it, which was a nightmare trying to keep a toddler still!

“But the play team on his ward at Royal Manchester Children’s Hospital were just incredible and he really loved them.

“Part of what the Charity funds at the hospital is therapeutic play and Leo really felt the benefit of what they’re able to do. He really loved his play leaders.”

In 2020 Leo was back in hospital for a second operation, this time on his hip.

His leg wasn’t sat in his hip joint properly, so surgeons at Royal Manchester Children’s Hospital had to reconstruct a new joint from bone and metal. 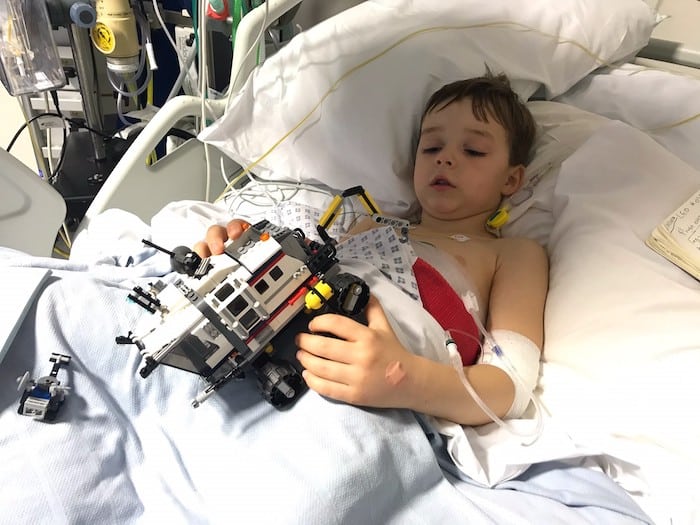 After the operation, Leo spent a week in hospital wearing a spica cast – a special cast around his waist and top of his legs to keep his joints in place.

The positioning mean he slept propped up on pillows and had very little moment.

“It was difficult when he couldn’t move much, but every chance he had he went out into the hospital garden,” said Claire. “He loved it there.

“He also really loved the robot artwork in the X-ray department and the fish tank on the ward.

“The play team also found him lots of Lego to play with. He loves Lego. We found things to keep him amused.”

Leo now walks with a prosthetic leg – fashionably decorated with Pokemon characters and some masks and skulls around the knee area.

He takes his wheelchair to school for when he gets tired but walks on his prosthetic whenever he is able to. 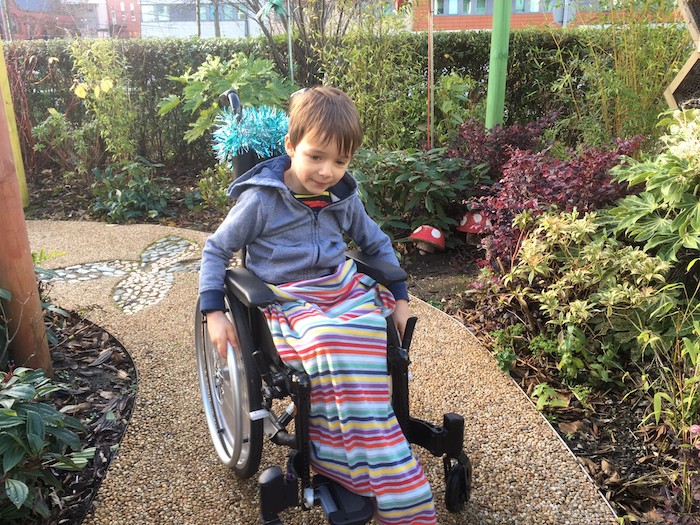 “He calls his prosthetic his ‘robot leg’,” said Claire.

“Most people might think it’s bad to have a child in hospital, but I think Leo secretly enjoys having people waiting on him.

“I’m glad he is okay with going into hospital now because at some point in the future he will probably have to have another operation to fuse his knee.

“As his left leg was 50% shorter than the other one, his knee is very close to his hip due to is femur being very short, so it bends in the wrong place.

“They also need to keep an eye on his hip too and see how his recovery goes with that.”

In the meantime, Leo has been enjoying time at home with his family in Burnage, south Manchester and recently went on a holiday to the Lakes. 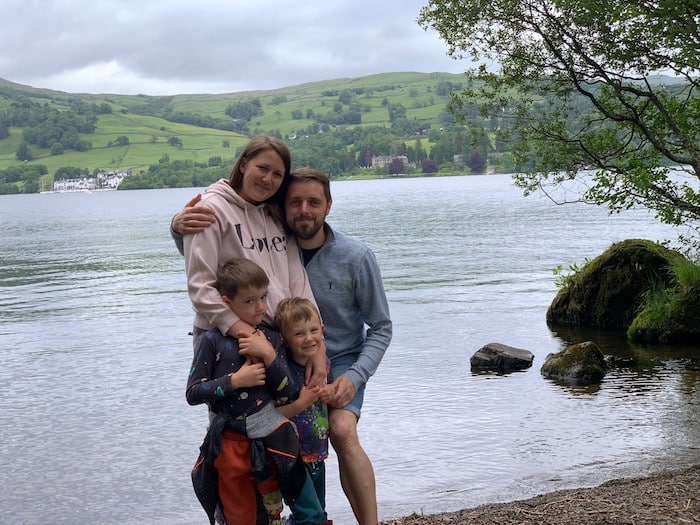 His fundraising page for Royal Manchester Children’s Hospital is at an impressive £394, having originally set a target of £100.

“It’s clear that he is passionate about doing things for other people and it sounds like little brother Ashley will be following in his footsteps too.

“We’re so pleased the White family have chosen to fundraise for us in this way and we’re already looking forward to Great Manchester Run 2023.”