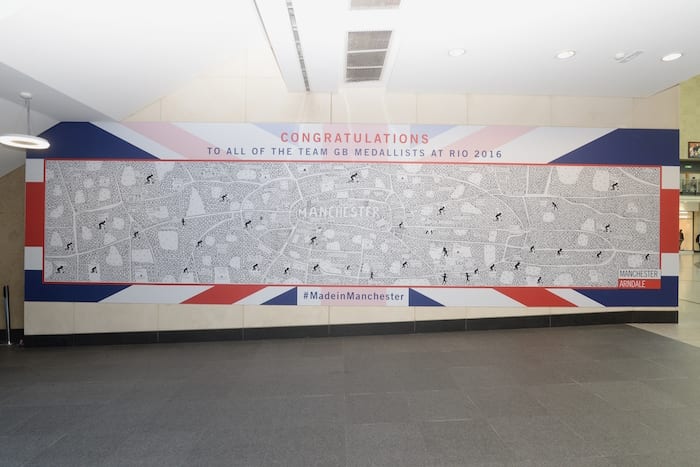 Didsbury-based artist David Gee’s biggest project yet – a giant mural celebrating over 70 ‘Made in Manchester’ medals at Rio 2016 – has been unveiled at the Manchester Arndale.

The mural, which is almost 10 metres in length, celebrates the achievements of the athletes born in Greater Manchester, or who now live and train in the area, who won medals at this year’s Olympics and Paralympics.

Armed only with his trusty pen, David worked through the night to craft his latest masterpiece.

Among those celebrated in the mural are local newlyweds Jason Kenny and Laura Trott and other Manchester-based athletes at one of the city’s medal hubs, the Velodrome.

The artwork, which is located in Exchange Court by the Next store, also features well-known landmarks including Manchester Arndale, the Town Hall and the Mancunian Way.

“Manchester has a rich sporting culture and we’re proud to see so many medals from our home-grown athletes, as well as those who choose to live and train here,” said Manchester Arndale centre director David Allinson.

“Being in the centre of the city, we wanted to do something extra special to give our local heroes a fitting celebration. The results were so impressive we had to find a 10 metre space to fit them all on!”

“This is a fantastic project to be involved with,” said David. “I’ve been lucky enough to travel the world as an artist, but being able to produce something so unique at home as my biggest ever challenge is a real honour. I hope our athletes and visitors to the centre enjoy the mural and take a moment to appreciate Manchester’s amazing achievements.”

The artwork will be on display in the Arndale for six weeks to allow visitors to Manchester’s ‘welcome home’ Olympic parade on 17 October to see it.