Manchester 235 Casino Reviewed – The Chips Are Down

We were all made-up to go to Manchester 235 casino – literally, as Turks has nearly completed her make-up course and decided we all needed a bit of a sprucing for a night on the town.

Dubai had a natural finish, while Ginger had to be toned down from his normal redness and I had the most dramatic eyes ever – what was even better was Turks coming with us, to touch us up as and when required, something the boys enjoyed.

In our glad rags we went to the casino at the bottom of Deansgate to learn how to gamble and to dine at Linen, their restaurant. Gambling and dining packages start from £25 which includes a three-course meal, champagne cocktail and a beer or wine, as well as a turn on the tables. You can upgrade for £10 from the Fusion Bistro to Linen, which is a great bargain for what is a proper night out. 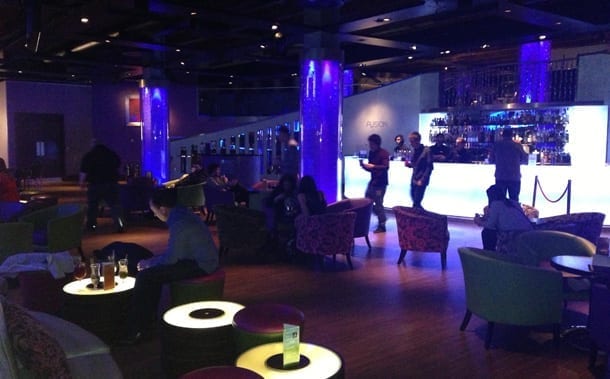 The first thing that strikes you is what a game of two halves this venue is. The first two floors are all florid pub carpet with tables of gamblers in various stages of desperation and elation. Then you ascend to the wonderfully chic Fusion bar and absolutely gorgeous Linen restaurant. In fact, this is one of the best rooms in town, where we had a bouncy floral booth and enjoyed the tinkling piano of Charlie Cooper, who gave this night out a special touch of class. 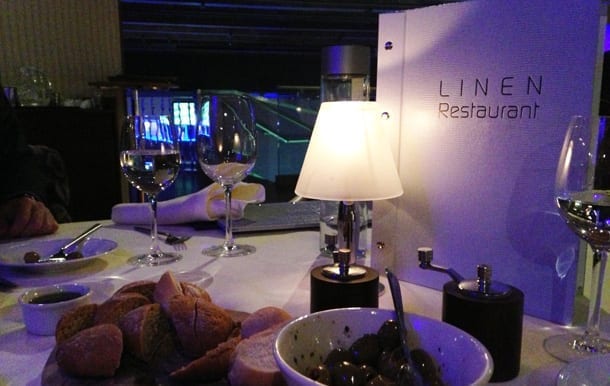 Then it was onto starters. We arranged our review purposely for the new launch of the new a la carte menu. A modern British springtime menu that embraces lighter dishes.

Turks and I shared the charcuterie which came with lots of different hams, mozzarella and sun-dried toms. Perfect for sharing and whetting the appetite, I would have loved some artichoke with it, for total perfection, but it was very good.

Ginger had asparagus and poached egg which he declared were the ‘daddy’ of asparagus (or asparagi?)wonderfully light and crunchy with a perfectly gooey egg, while Dubai’s terrine, was a great, course slab of taste.

Onto mains and Turks was raving about her three-bird roast, one of the Linen signatures. My veal was slightly overdone but the sauce was delicious and the accompanying vegetables perfectly cooked, with a garlic spinach that simply melted on the tongue. 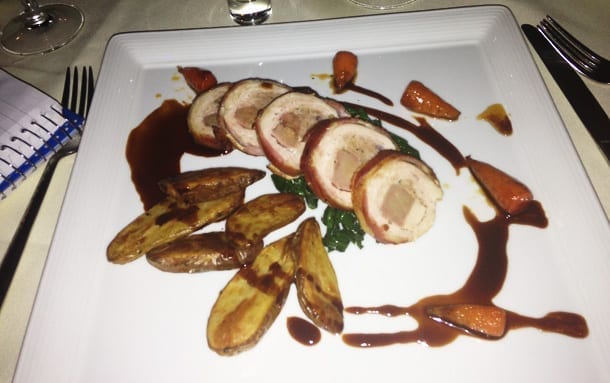 Dubai loved the flavour of his fillet but again felt it was cooked more than he would like and also felt the portion should be bigger for the £30 price tag if you weren’t doing the deal. Poor Ginger had a rib-eye that he said was more gristle than meat, this can happen in even the best restaurants and to be honest he probably should have sent it back and asked for a better piece rather than manfully munching on. I’m sure the lovely staff would have had no problem with that.

It was then off to learn how gamble with our private tutor MJ, who was a delight and took us through the twists and turns of Black Jack. 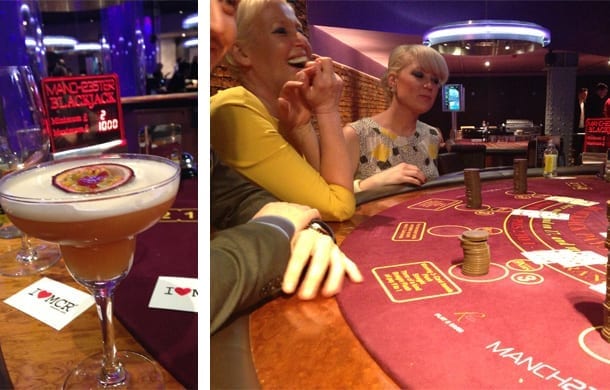 Whilst we endeavoured to perfect our poker faces, it was a real education and we learned:

That you can ask the croupier for tips and they are there to help you.
That you can’t swear like Turks or you will be thrown out.
That you can’t take photos without going through some stunning contortions so people don’t think you’re cheating or ‘papping’ people.
That we’re all really bad at gambling and thank god the chips were plastic.
We then took a turn on roulette where we were given 95 million chips each so could win a lot as it meant we could place bets on almost every number. I would have been £1,168 richer – but would have spent a lot more for that win. 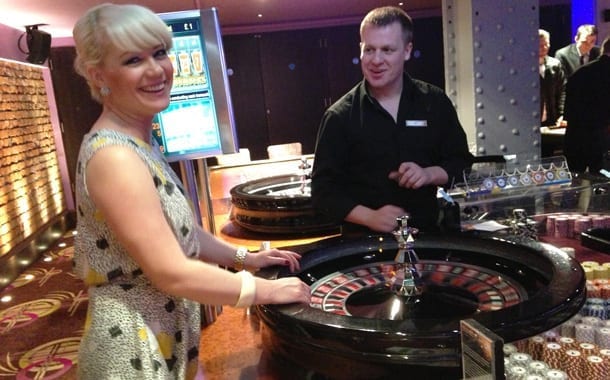 We were all agreed that when we visit again, it’s the Black Jack for us, a little like pontoon but more James Bondy.

It was back up to Linen for puds where I enjoyed delicious cheese and biscuits though Turks thought the portions were a bit small. They were fine for me and anyway, she should go to Damsons for small.

The boys, who can never resist a bit of sweet opted for cheesecake and Cornish ice-cream which was actually above average.

Then it was into the eternal winter that is Manchester, hailing a cab for an early night only to be kidnapped by those naughty boys at the Liquor Store. But that’s another story ….

We love the fact this is a really different night out. Take a gamble on it, but remember the eating and gambling packages are the best bet.