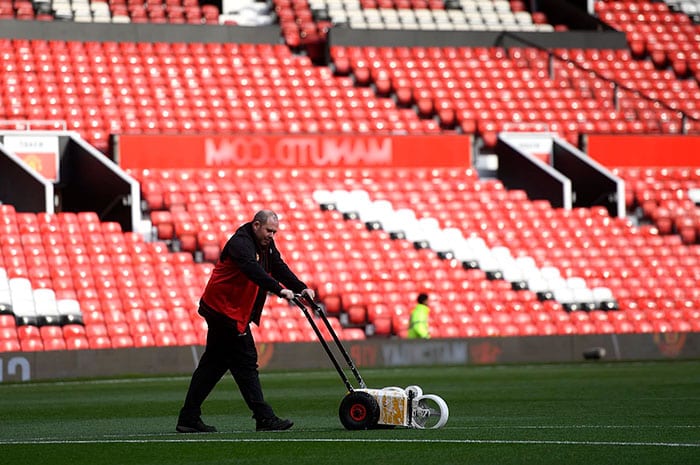 Manchester United sent an email to all non-playing staff today to clarify that the club are paying them in full during the coronavirus outbreak.

United follow neighbours Man City in announcing they will not be using the government’s job retention scheme to pay employees while they are unable to work which has controversially been used by other Premier League clubs like Liverpool FC.

The Red Devils will continue to pay staff in full and according to reports will look for ways the club’s employees can help the UK’s efforts to combat the killer virus through voluntary work.

“We [non-playing staff] got an email today to say they [Manchester United] are paying all staff as normal throughout this pandemic,” said an anonymous non-playing staff member. “We are well happy with that!”

Critics rounded on Liverpool after it emerged they were among five Premier League clubs planning to furlough non-playing employees during the coronavirus crisis which has brought football to a standstill. The club subsequently reversed its decision.

The scheme, which will be used by Tottenham, Newcastle, Norwich and Bournemouth, will see workers paid up to 80% of their salaries using taxpayers’ cash.

But the furlough clubs have been criticised by former players for using taxpayers’ money while first-team stars on multi-million pound contracts continue to be paid in full.

City confirmed on Sunday that they would not be furloughing employees, and United are set to follow suit, according to the Daily Mail.

This comes after the two rivals announced a combined £100,000 donation to support Greater Manchester’s food banks amid rising demand.

It said United will not ask for government cash and will instead pay employees in full and explore opportunities for them to volunteer which could help the nation’s efforts to fight the spread of the virus.

United had already pledged to pay their match day staff for the rest of the season, which is currently suspended.

City confirmed on Sunday that they had decided not to use the furlough scheme at the end of last week.

A statement read: “We can confirm, following a decision by the chairman and board last week, that Manchester City will not be utilising the UK government’s coronavirus job retention scheme (government funded furloughing).

“We remain determined to protect our people, their jobs and our business whilst at the same time doing what we can to support our wider community at this most challenging time for everybody.”