There’s currently an elephant at Piccadilly Station – here’s why

Of all the things you might expect to see at Piccadilly Station during your commute, an elephant skeleton probably isn’t top of the list.

But that’s what greeted surprised commuters this morning. Not just any old skeleton, but that of Maharajah, Manchester’s most famous elephant. And ironically, given he’s now in a train station, this particular elephant refused to travel by train.

Maharajah was bought by Belle Vue Zoo in 1872 from a travelling circus in Edinburgh for £680 (about £76,000 today). He was supposed to travel to Manchester by train, but became distressed on board and tore the roof off the carriage.

The only solution was for the two metre tall elephant to walk from Edinburgh to Manchester by road with his keeper Lorenzo Lawrence. That’s a journey of over two hundred miles. It took them 10 days. 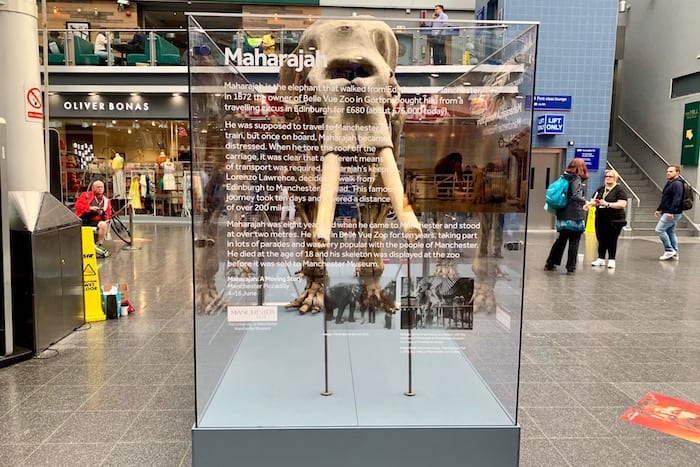 Maharajah lived in Belle Vue for 10 years, and after his death his skeleton was sold to Manchester Museum.

He’s been a much-loved part of the Museum for many years, but the space is currently being refurbished as part of hello future, the new £13 million project partly funded by the National Lottery Fund to transform and develop the Museum.

But how did he come to be at Piccadilly train station?

“He arrived today, having been built overnight by our workshop team,” says Amy McDowall, primary learning co-ordinator at Manchester Museum.

“It’s all part of us being open, even though we’re part closed at the moment, for the people of Manchester, who it belongs to.

“We’ve put this on while there’s so much going on in the city, including Parklife next weekend, so lots of people will get to see Maharajah, not just commuters.

“Maharajah has been chosen as he’s an Indian elephant, and part of the big redevelopment at the Museum is of the South Asia Gallery.

“We believe it’s going to be the world’s largest permanent co-curated exhibition. Rather than just being organised by curators alone, there are about 150 people on our community panel: artists, educators, media, politicians.

“It’s not just down to us to tell stories, it’s down to the people of Manchester  to tell their own stories. The museum is on a mission to be the most inclusive, imaginative and caring museum in the world.” 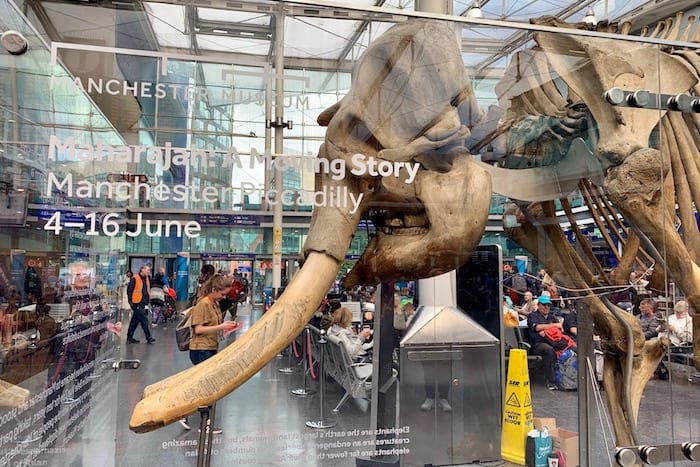 Are there any other exhibits appearing in unexpected places?

“We have some objects in Longsight Library at the moment,” says Amy.

“And we have Egyption shabti figures, they’re like mummies but smaller, that have gone out to schools across the country. And this afternoon, we’re putting a call out for more schools to apply to have one in their school – check the hashtag #MMhellofuture on Twitter.

“It’s all about what you want to see in your community. So if you want a mummy in your leisure centre or a stuffed bear in your community centre, or even items in people’s homes, make your suggestion! We’ll wait to see what people ask for.

“Normally we have about 25,000 children come to the Museum with schools to learn about ancient Egypt, but that part’s currently closed.

“But through these initiatives we can still reach thousands and still inspire that awe and wonder.”

And with further plans afoot for exhibits to appear across the city, keep your eyes peeled. Who knows what you might see in the most unlikely place?