It may not be Christmas yet, but that seasonal feel-good atmosphere is charming the socks off everyone visiting the forests around Blakemere Village in deepest Cheshire right now.

They’re all aglow with playful light shows and luminous goings-on with self-guided winding forest trails beneath the twinkle of theatrical lights and lanterns.

It’s a similar feel and concept to Kew Gardens at Christmas or Dunham Massey, both of which transform into a technicolour winter wonderland of glowing vortex tunnels, whispering trees and flickering fire lights over water.

Kew Gardens, this isn’t. But the team behind Blakemere’s spectacle have pulled off a corker of an event with well-put-together scenes and reams of atmosphere. 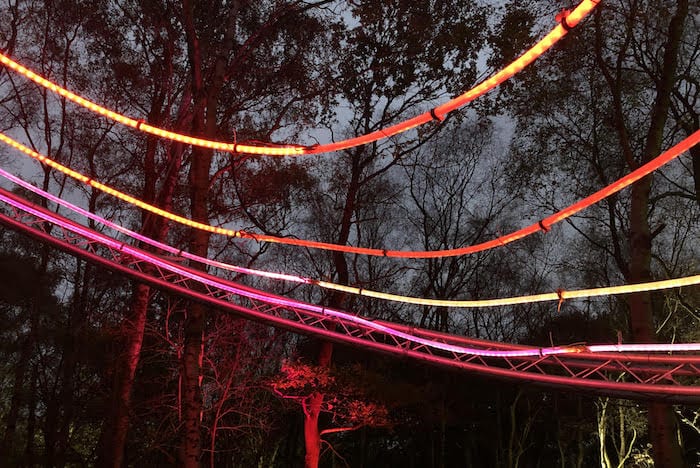 Tunnels of light welcome families and kids, steering them into the eerie woodland, some with sequinned faces, others spurred on by the mention of hot choc and marshmallows.

The idea is to wander along the looped trail winding around the 15-acre copse and there are no restrictions. If you want to circle it 10 times you can. But you‘re looking at around an hour for one walk-through. And if you’re towing along toddlers, prams and pushchairs can easily navigate the paths. Just don’t forget your wellies.

What’s in store? There’s the huge ‘imagination spiral’ suspended above everyone’s heads that changes colour with a few pumps of a lever.

There’s the hidden, illuminated picture frame that’ll get instagrammers going. And there are a handful of rudimentary dens, crafted from reclaimed sticks and foresty bits, where little ones perch beside a shimmery fake fire.

The forest floor lights up with the glimmer of disco balls hanging from boughs, and weird glass-like cubes create  optical illusions.

Everywhere you go, there are wide-eyed kids craning their necks to stare at the great, hulking trees lining the path, lit up in blues, greens and pinks, and music chiming out from hidden speakers.

There’s a food area with stalls serving prosecco, cider, and hot coffee, and the distinct whiff of mulled wine.

A smoking fire centrepiece was surrounded by kids propping sticks of marshmallows into its flames and grown-ups licking off the too-hot-to-touch sweets. 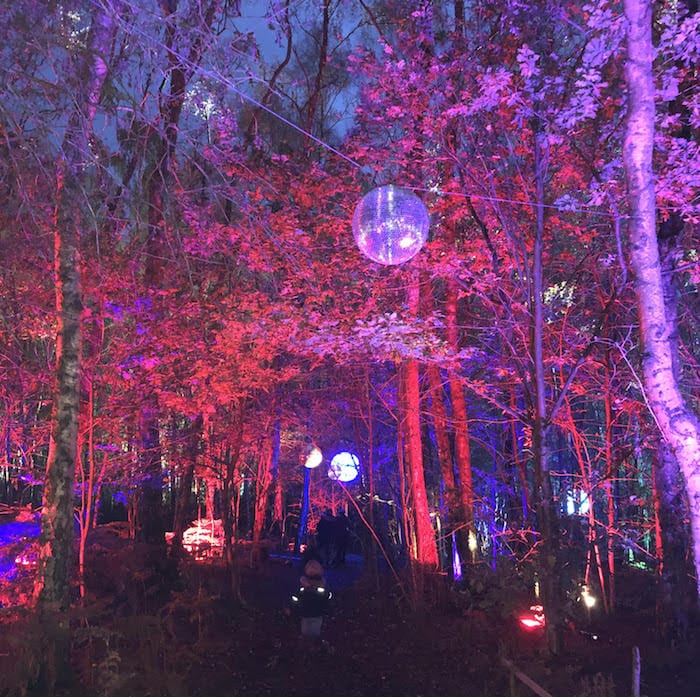 Chart-toppers played out from a speaker beside a wall of fountains, and little ones cosied up with pink noses, glugging down mini cups of hot chocolate.

Beyond this, follow the uphill path where mini white tipis light up its edges, beacons of colour illuminate the trees, and the thud of electro bangs out. It’s the thrilling sort of set-up you might find at a festival, hidden away from the mainstream – a surreal pocket where the tunes blared and the glowing beacons shimmied to the beat. In fact, they might be onto something.

Wrapping things up with a last dusting of enchantment were meetings with three owls, perched on stands and swivelling their heads to stare with spirted eyes at a handful of open-mouthed children. That and the lake’s fountains with flashing laser beams to a soundtrack of Pharell Williams’ Happy.

I was genuinely surprised at the size, the quality and the ingenuity of Magical Woodland. But you haven’t got long until the curtain comes down on the after-dark wanderings – 3rd November is the last evening, so get booking if you’re a fan of autumnal, sparkly vibes.

Magical Woodland is one of the highlights of Cheshire’s Where Science meets Nature campaign, a county-wide initiative championing Cheshire’s role in two landmark moments: the 100th birthday of the Forestry Commission and the 50th anniversary year of the Lunar Landings.