Lydia German and her Grandpa are taking on developing giants Peel Holdings over their attempts to destroy Hulton Park for a golf course, 1000 houses and hotel 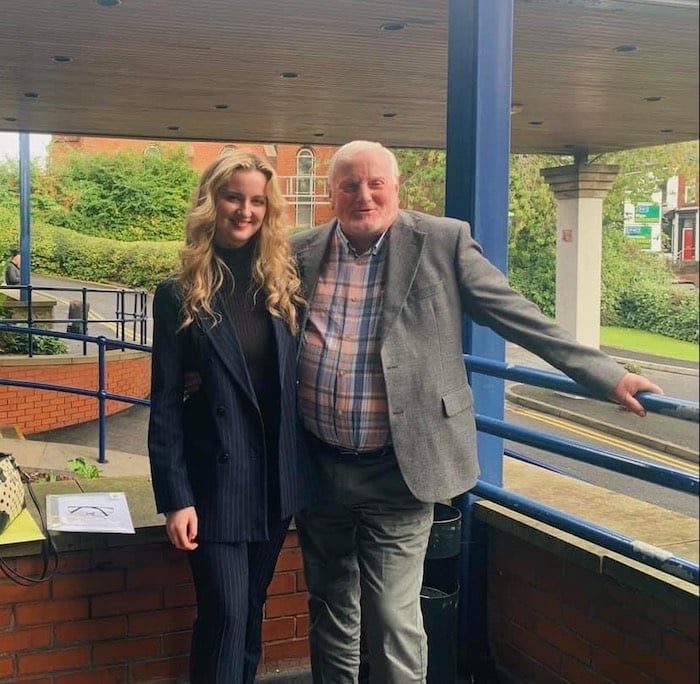 Lydia German from Bolton and her grandfather Peter German are taking on Peel Holdings who are looking to demolish woodland at Bolton’s Hulton Park.

Bolton Council initially accepted the plans in 2018, as did the Secretary of State in 2020.

However in February Bolton Council recently rejected a revised plan from Peel Holdings.

Lydia’s Grandpa Peter is a retired Senior Wildlife Inspector where he worked for years at the Department of Environment, Food and Rural Affairs.

Despite being retired, he is still ceaselessly fighting to protect local land, wildlife and the environment.

The plans went to a two-day public inquiry held at the Holiday Inn in Bolton on 6th and 7th of October.

Ahead of the public consultation last week Lydia’s Grandpa wrote a detailed report on the effect destroying this woodland would have on local habitats and the environment.

However, Lydia claims she wasn’t allowed to read it all on his behalf at the inquiry as each speaker was only allocated 5 minutes to voice their objections.

Lydia says that she then had to listen to Peel Holdings “drone on for an hour” about how the local environment wouldn’t be affected by the destruction of the woodland.

She then says that she was citied specifically by the independent examiner for her “generic statements” and was told that they could stop objections mid sentence to move the debate on.

Lydia and her grandpa felt this amounted to ‘being silenced’ for having differing views.

Lydia said: “I was so angry about this, me and my grandpa just decided to walk out.

“We’re supposed to live in a democracy, but money can buy you anything.

“How can you just ignore over 10,000 local residents who signed against this proposal, ignore detailed scientific calculations, then hire the top barristers in the country to fight against local residents who aren’t allowed to speak from the heart about things that will directly affect them.”

“I wanted to go into detail about how it’s my generation who are going to be the ones to suffer the long term environmental and economic consequences of this, but we weren’t allowed to speak for long enough.”

The 10,000 signatures were received by HEART, ‘Hulton Estate Area Residents Together’.

You can read more about their campaigning and work here.

Lydia took to Facebook to air her anger and concerns about this process, and she has received an amazing amount of support.

Lydia and get grandpa have said they will continue to fight to protect their local land and wildlife.

The development has been met with huge opposition, including comments from leader of the Council Martyn Cox that the development would be ‘inappropriate and harmful to the area’.

“We’ve consulted extensively with the public on our plans and ecological information about the project was assessed at the first public inquiry where it was concluded by the previous Inspector and the Secretary of State in granting planning permission that our proposals would bring substantial benefits.

“Natural England, the Greater Manchester Ecology Unit and Bolton Council all agree that the proposals would deliver ecological enhancement overall. The revised vision would achieve even greater biodiversity net gain than the previously approved plans.

“There was a large amount of ecological information and evidence before the inquiry and we would be happy to discuss or meet with Miss German and her grandfather, with our ecologists, to explain the position further if they wish.”

Earlier this year, Bolton Council’s Planning Committee refused an application to alter the agreed plans for the site.

After Peel holdings appealed the committees decision, and will review following the enquiry.

The Planning Inspectorate will make a final decision on the appeal at a later date.