Lunya Manchester is located in the stunning Barton Arcade. Spread over two floors with their deli and bar on the ground floor and their restaurant and kitchen on the first floor.

Its first branch was in Liverpool, where it has won a host of accolades including Good Food Guide North West Restaurant of the Year for 2015 and 2016, Cheshire Life Restaurant of the Year, Sunday Times Top 5 Spanish UK restaurants, The Guardian’s Favourite 50 restaurant list and received consistent praise from local and national press alike, placing it firmly as one of the UK’s very best Spanish restaurants.

Owners Peter and Elaine Kinsella obsessively source every product they have from the very best of Spain’s food producers, farmers and suppliers. The deli is a temple to the most exquisite Spanish produce.

The restaurant has an extensive menu which uses the stunning produce from the deli and features a mix of traditional and modern tapas and paella including its Catalan Fideua. 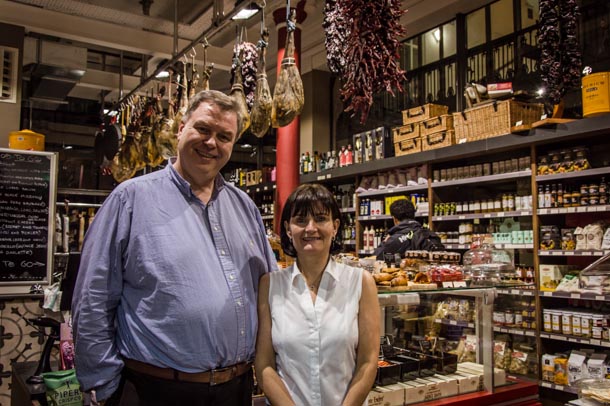 If booked 48 hours in advance, you can enjoy Cochinillo – a whole roast suckling pig from Segovia served in the authentic style by carving with plates.

The bar has an extensive and exclusively Spanish wine list with over 150 Spanish wines, sherries and cavas, and over 12 Spanish beers on draught or in bottles.  Famed for its Spanish gin and vermouth bar, Lunya is a place to stop whether it’s for a cup of its fabulous Saula coffee imported from Barcelona or for that special occasion for any size group, large or small.

Open just 5 months, Lunya has already been named Manchester Restaurant of the Year by the Manchester Evening News and is a firm favourite with Manchester’s Spanish community and Hispanophiles alike, making it one of Manchester’s ‘must go’ dining venues.