One of artist L.S. Lowry’s most iconic works has come ‘home’ to Manchester and gone on public display from today.

The painting, Going To Work, is being exhibited at the Imperial War Museum North for the first time, just yards across the Manchester Ship Canal bridge from the Lowry Arts Centre in Salford Quays-MediaCity that was named in his honour.

Created in 1943 at the height of the Second World War, the painting was commissioned to depict industrial scenes in Manchester. Lowry painted factory workers on their way to the Mather & Platt engineering works in Newton Heath, Manchester.

Barrage balloons, used to defend against aircraft attacks, can be seen in the morning sky overhead as workers walk to the factory. The white sky and ground, originally thought to be snow, is in fact an evocation of industrial haze.

Mather & Platt was a successful business established in the 19th century and was well known for producing battery pumps used in all types of industry. The factory was taken over by the government during the Second World War. It produced munitions and pumps for the war effort, and manufactured equipment that was sent to the Soviet Union for use on the Eastern Front.

The painting was commissioned and collected by the War Artists Advisory Committee set up by Sir Kenneth Clark, director of the National Gallery, which collected around 6,000 art works through commissions, purchases and donations throughout the war.

At the end of the war, IWM helped allocate different works to galleries and institutions around the world. IWM itself received around 3,000 works of art, including Going To Work.

Lowry was paid 25 guineas for the commission, and completed the work within three months. The painting was displayed many times by the committee in exhibitions throughout the country and abroad to promote Britain’s Second World War effort.

Ahead of its current close-to-home display, the painting has undergone some conservation work including the removal of varnish from the painting, which was added sometime after Lowry created the artwork as Lowry did not varnish his paintings.

The varnish had affected the colour balancing of the artwork, adding a yellow hint to the painting. Removing the varnish has revealed the work that Lowry originally intended.

“British manufacturing was a very important subject for artists in both world wars, representing the huge effort of men and women who worked in factories across the country.

“Lowry, whose reputation was growing at the start of the Second World War, was seen by the War Artists Advisory Committee as the ideal artist to paint the subject of war production in his native Manchester.

“We are extremely fortunate that this work came into IWM’s collection at the end of the war and it is incredibly exciting that it will finally be going on permanent display in its home city.”

L.S. Lowry was born in 1887, in Stretford, Greater Manchester. He lived in Manchester for all of his life, and is best known for his paintings of crowds of people in industrial settings, including many in the Salford area.

Lowry was a solitary character – though was a familiar presence at the bar of Sam’s Chop House in the city – and somewhat of an outsider to the art world, hiding the fact that he worked full time as a rent collector for a property company.

He would return from a full day’s work, observing the city and paint from memory at home, often working into the night. Lowry died in 1976 at the age of 88.

Alongside Going To Work, several other works will be going on display for the first time at IWM North as part of a major rehang of artwork at the museum.

Works include Building Flying-Boats by Flora Lion, who painted factory scenes in the North of England during the First World War, and The ‘L’ Press – Forging the Jacket of an 18-inch Gun by Anna Airy, one of the first women war artists, employed by the newly-founded Imperial War Museum in 1918. 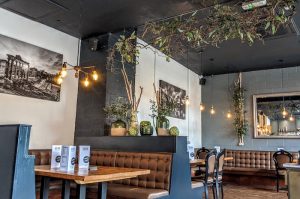 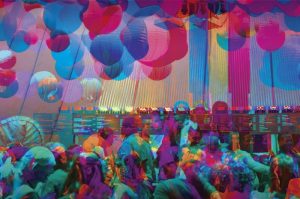