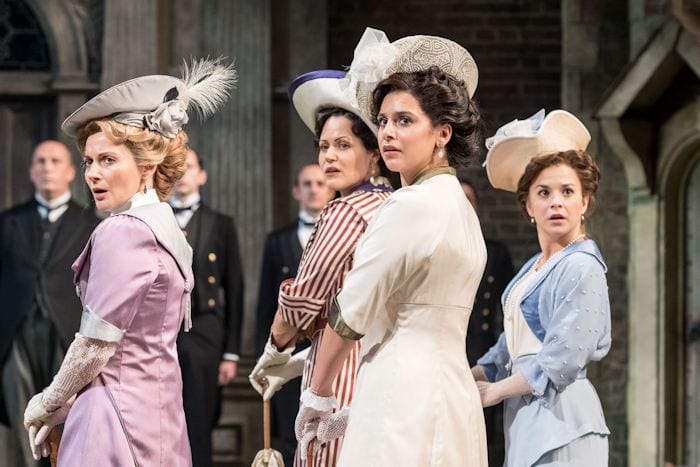 In this production by the Royal Shakespeare Company, Love’s Labour’s Lost has been transported from the sixteenth century to the years just before the Great War when women wore elaborate feathers in their hats, the rich were waited on by eager footmen and the threat of change was looming. It’s like watching a bizarre Downton Abbey storyline but in Shakespeare’s rhyming couplets.

It couldn’t be a better backdrop for this comedy which centres on the King of Navarre and his household who have vowed to take on an ambitious three-year vow of chastity, fasting and learning. No women, rubbish food and constant studying – you just know from the onset that this is going to be a hilarious journey of self-control.

Temptation appears early on in the form of the Princess of France and her ladies as well as the wily local dairy maid who all upset the natural order, creating great entertainment with their witty banter and shameless flirtation.

Devoid of the dramatic soliloquys and deaths of Shakespeare’s more tragic plays, Love’s Labour’s Lost is filled with frivolous plotlines, ridiculous characters and plenty of bawdy jokes that still manage to be funny to a modern audience. Of course, this may have something to do with the talented actors, too. You’d expect nothing less of the Royal Shakespeare Company than a stellar cast who portray their characters perfectly.

From the flamboyance of the Spanish traveller, Don Armado (played by John Hodgkinson), the foolish antics of the clueless palace gardener, Costard (Nick Haverson), not to mention the alluring yet intelligent French ladies (Leah Whitaker, Lisa Dillon, Rebecca Collingwood and Paige Carter) who bamboozle the Navarre courtiers, every character is both vivid and memorable.

Another memorable aspect of the production is the stage itself. Inspired by the Elizabethan grandeur of Charlecote Park in Stratford-upon-Avon, the sets are subtly detailed and aid perfectly in immersing the audience in the action.

Apart from the King’s study with its books and chaise longue, one of the best sets (and backdrop to one of the most hilarious scenes) is the roof of the palace where tall chimneys and perilous railings provide the perfect hiding places for lovesick eavesdroppers in velvet dressing gowns reciting silly poetry. The final act also makes use of simplistic scenery when some Russians drop by for a dance and the household puts on a musical pageant that doesn’t go quite to plan.

For an evening of foolery and fun, Love Labour’s Lost is definitely one Shakespeare play to tick off your theatre bucket list. Its ridiculous plot, immersive set design, great period costumes and the incredible actors who bring it to life make it one of the most watchable of Shakespeare’s plays and gripping throughout, but be aware that the ending may disappoint any romantics in the audience.

Catch Love Labour’s Lost at the Opera House until the December 3 along with partner play, Much Ado About Nothing, which is set in the Roaring Twenties and performed by the same great cast.