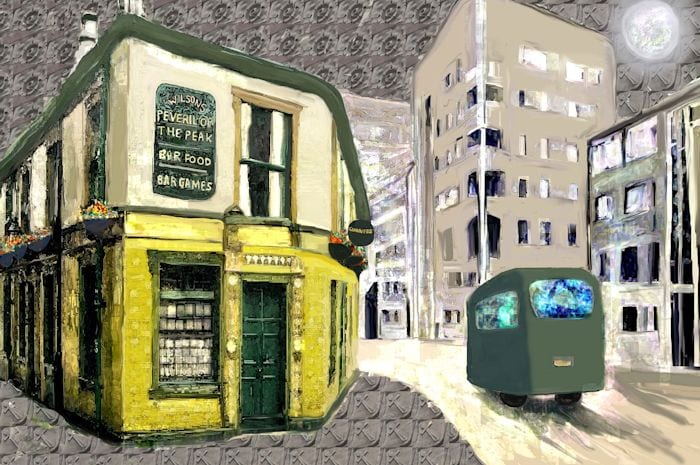 A unique collection of paintings depicting the changing face of Manchester is coming to theatre and arts centre 53two later this month.

The paintings are the work of local artist Claire Riley, who grew up in Didsbury but was drawn to the derelict areas of Hulme and Moss Side where huge changes were taking place during the slum clearances of the late 1960s.

Fascinated as a child, she would take photographs of the scenes of dereliction and renewal with her dad’s cine camera.

She was born in Nottingham and moved to Manchester when she was six when her father got a job as lecturer at Manchester University. Her mother was an art teacher at St Mark’s secondary school, East  Didsbury.

Claire discovered her passion and flair for art at Loreto College and after taking sculpture A-level – quite unusual in1976 – she went on to study Fine Art at Newcastle University. 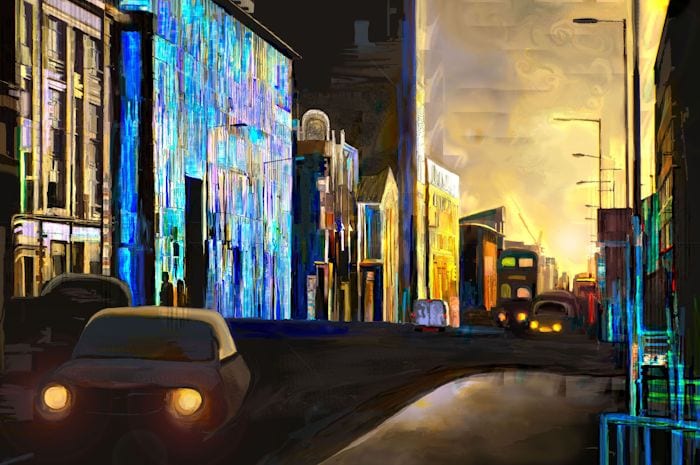 “I was about seven or eight and would pester my dad to take me out with his new camera so I could capture the changing scene. I was intrigued by the sense of chaos and abandonment and at the same time the feeling of change that was in the air,” says Claire, who now lives in Hulme – the place that so inspired her all those years ago.

Her work is characterized by watery textures of light, half light. Of hidden places that only she has observed and of the mingling of old and new that sums up the very nature of  Manchester today.

Her job as an emergency social worker working through the night means she deals with all kinds of incidents, across all ages, from mental health act assessments in police stations and hospitals to protecting children and vulnerable adults across Greater Manchester.

She regularly sees the region at dawn and twilight as she travels across the metropolis. Often a view from her high rise office block will spark her imagination.

“Working at night, has inspired me to see things in a different way, in a different light, literally and ﬁguratively, and I feel compelled to record the region old and new. I certainly feel more connected to what is around me since doing this job,” says Claire.

It has given Claire a unique perspective enabling her to produce such distinctive works. The inspiration for her current collection was a chance viewing of a television programme which featured David Hockney producing artworks by drawing on his iphone and iPad.

“I had been yearning to ﬁnd a way of using technology to paint with and seeing that programme inspired me to access the appropriate software and explore working with that medium. Someone of Hockneys’ calibre using those techniques really spurred me on.”

“I prefer to see myself as a digital painter rather than an artist. My work is not about photo manipulation, more about using a virtual paint palette. And more recently I have been using an actual paint palette to create or further embellish the earlier digital images, which I ﬁnd quite exciting. I am really enjoying the challenge of this and getting messy again.”

Northern Light is open to the public from 11am – 6pm on Thursday 23rd November when you can view, reserve or commission an artwork in Claire’s own unique style.