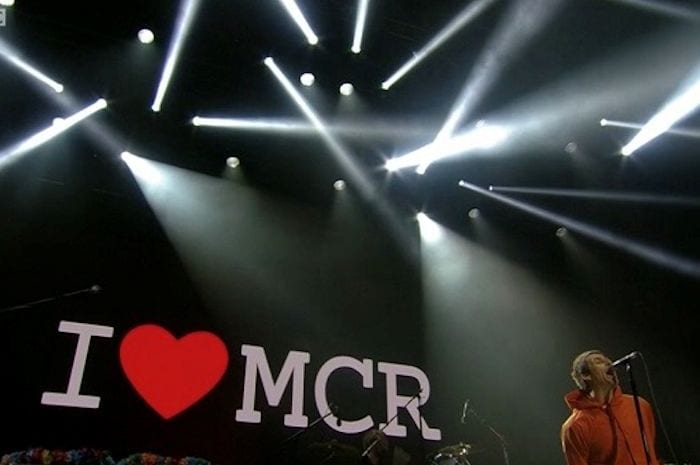 Liam Gallagher took to social media this morning apologising for his brother Noel’s absence from the One Love Manchester benefit concert.

As thousands of young fans watched on at the One Love Manchester tribute concert last night, there was a growing buzz about social media of a surprise Oasis reunion.

The benefit gig, broadcast on BBC1, saw some of the biggest names in music assemble alongside Ariana Grande to help raise funds for those who were injured and the relatives of those who died in the attack.

Rumours had been circulating that both Liam and Noel would perform together as Oasis once again, with broadcasters reminding viewers ‘something special’ was coming up later in the show. Could it be that, after eight long years, two of Manchester’s most famous sons were finally putting the band back together?

As the night went on, the rumblings got louder and when Ariana and Coldplay’s Chris Martin performed a rendition of Don’t Look Back in Anger, with fans barely containing their excitement. Then finally, just after 9pm, a familiar guitar riff started playing and out stepped none other than Liam himself.

But where was Noel?

Although the Oasis reunion never materialised, Liam did manage to perform his new single Wall of Glass as well as Live Forever, which proved one of the highlights of the show.

This morning Liam tweeted a message for his brother and the people of the city.

Noel is yet to respond to the tweets, but one thing for certain is that there won’t be an Oasis reunion any time soon. Both brothers are notorious for wearing their hearts on their sleeves – a trait which has seen the pair come in for some criticism in the past – but, judging by the number of responses, it seems Liam was justified in what he said.

Previously, Liam denied the Oasis rumours. When asked by BBC Radio One whether a reunion was a possibility at all, he said: “No, it ain’t. Everyone knows I love our kid. He doesn’t speak to me, we don’t speak to each other.

However the tweets seem to indicate that, although Liam was willing to reform for the one-off gig, Noel declined the invitation.

Ariana Grande was joined by Coldplay, Justin Bieber, Katy Perry, Miley Cyrus, Take That, Little Mix, Pharrell and others for yesterday’s show. Emotions were high as artists paid tribute to the 22 people who died in the explosion.

It’s been reported that the benefit gig raised over £2million, in addition to the more than £2million raised from a page on GoFundMe.

To donate in the United Kingdom, text ‘LOVE’ to 70507 to give £5 or donate online via this dedicated British Red Cross page.