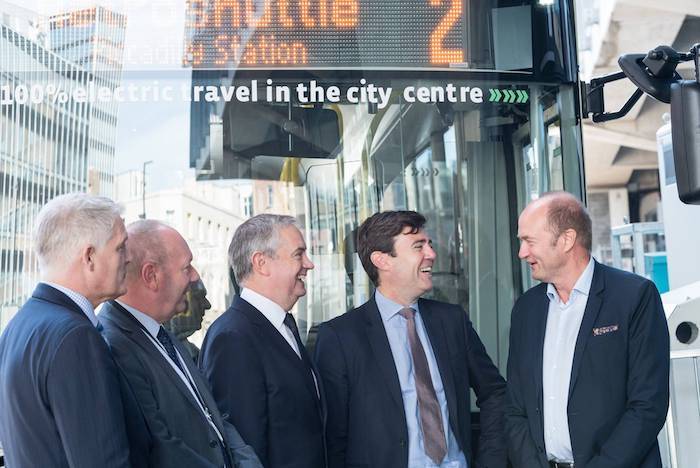 Andy Burnham is set to become the first of England’s executive metro mayors to take up new powers granted by Parliament to drive forward a major overhaul of transport in Greater Manchester – starting in the New Year.

In a keynote speech to northern regional transport chiefs he said: “Concern about transport in the north is nothing new. The difference is it can no longer be ignored. We are at the beginning of a period of unprecedented change for the UK.”

Greater Manchester transport bosses have lobbied for years for a regulated bus system comparable with London – and the passage of the Bus Services Bill though Parliament earlier this year will at least partly meet that demand, allowing combined authorities to regulate bus franchising.

The move will bring to an end Margaret Thatcher’s decades-old policy which allowed private operators to set up along routes previously run by local authorities in every part of the country except London.

“Leaving bus services to the free market has not worked,” said Mr Burnham. “It has brought fragmentation and confusion. Two statistics provide evidence of failure: in unregulated Greater Manchester, 350 million bus journeys a year in the mid-80s have become just under 200 million today; in regulated London, bus usage growth is almost the mirror opposite.”

Visitors to Greater Manchester regularly complain about the confusing nature of our ticketing on buses and trams asking – reasonably –  why we can’t operate an integrated system like London.

The Greater Manchester Mayor added that having been dealt this bad hand of cards, with no real control over bus or rail, there was real pride in what Transport for Greater Manchester has been able to achieve. Metrolink was the largest light rail network in the UK – catering for more than 40 million passenger journeys a year with fully-accessible stops and trams powered by green energy – and the pioneering Leigh Guided Busway with environmentally-friendly hybrid buses had proved more popular than anyone predicted with 62,000 journeys a week.

“We now need to spread this success to all parts of our transport system,” said Mr Burnham. “I have written to the Transport Secretary to notify him of our intention to establish a Greater Manchester Strategic Transport Board which I will chair together with Sir Richard Leese, and which will hold the whole system to account for the Greater Manchester public by monitoring performance, progress on improvements and ensure joined-up working between the different players.”

The mayor has also asked TfGM to assess the costs and benefits of moving to a 24/7 control room – similar to the model used by Transport for London –  essential for any city with ambitions like ours. It will allow the board to be more proactive in preventing problems on our network and more responsive when problems do happen.

The biggest changes will affect the bus system which, despite decline in patronage over many years, still carry 75 per cent of all public transport passengers in the city region.

“The reasons for this [decline] are inevitably complex but it cannot help that in Greater Manchester we have over 40 different bus operators, with 160 different types of ticket available,” said Mr Burnham.

“We have too many communities receiving no service at all – or having their service taken away with minimal notice. And fares are simply too high – a single journey can cost £3 or more – compared to £1.50 in London.

“In some cases it is cheaper to travel by taxi or to drive into the city centre and pay for parking. As one of the responses to the Congestion Conversation said: ‘Sort out the extortionate bus fares. If I go to the city centre it’s cheaper to park than for a family for four to use public transport.’”

One of the ‘big wins’ to be gained from bus reform will be to integrate services with Metrolink and effectively operate as one system.