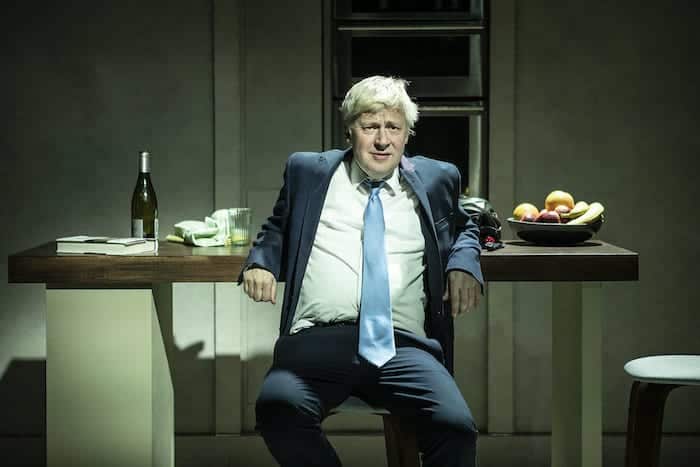 Jonathan Maitland’s new play began life at London’s Park Theatre and is currently on a short tour. When you consider what has taken place in the world of UK politics over the last four years, you can see why it was written and subsequently staged.

Since the Brexit vote, we now have a third Prime Minister, and there have been casualties along the way, including Jeremy Corbyn. The divisive Nigel Farage remains a constant on our news feeds, and every now and then Donald Trump says something about the situation here, which sends Twitter into overdrive.

Meanwhile, our Prime Minister’s first name is used constantly and there is much debate about whether he tousles his hair and untucks his shirt, just before airtime, playing up to that image of an ordinary bloke with an Eton education.

Whether you love him or hate him, there is so much great material for a play that you could almost go down the Frost/Nixon route and stick him in a room with Michael Gove and imagine what might have been said, as these to men battled it out in the name of power.

Instead, Maitland goes for all-out comedy. Thanks to Will Barton’s slick and spot-on impersonation, many of Johnson’s mannerisms are nailed, including the way he sits, ungainly and moodily before an Andrew Marr interview, and the way that many of his statements make great sound bites for those who do not want to dissect them – or nonsensical for those that do.

There are some interesting events covered in the play, including the one that Johnson penned two newspaper articles to clarify his thoughts, one in favour or remaining in the EU and one to leave. The idea that Michael Gove expected the Leave camp to lose, but that the campaign was there to make a point, is also an interesting story arc.

The problem is that none of this feels totally ‘oven ready’, to quote the Prime Minister, as it has the feel of a play which has been penned for the Edinburgh Fringe Festival, as a first draft.

It is neither a hilarious satire, nor a serious and thought-provoking play. In an attempt to be a balanced look at Boris Johnson and all that he has achieved, flaws and all, you come away with the impression that he is a wide-eyed puppy seeking acceptance.

So, his philandering is glossed over and, short of the odd snipe from another character, it is barely there. Yet, his catchphrases are repeated, until they end up becoming funny.

Politics in the UK has become so divisive that the public are not shocked anymore. We end up resorting to a tut or signing a change.org petition instead of joining a march.

And there are times when some of the decisions/statements being made are so ludicrous that they become hilarious. Jacob Rees Mogg giving advice on how to wash your hands, with the current threat of the coronavirus, is the gift that keeps on giving.

So, even when Margaret Thatcher, Tony Blair and Winston Churchill appear in the play to give Johnson advice, it is just not as inventive or as funny as it wants to be.

Louie Whitmore’s set design is very basic and apart from a striking moment when it intentionally breaks apart, it is barely there and feels very cheap.

Lotte Wakeham’s production is short and has some moments that will leave you laughing.

But what could have been a satirical and biting look at a divisive man, who amuses some and infuriates others, ends up being the equivalent of two hours of your life reading tweets from opposing sides shouting at each other on twitter, punctuated with smiley face emojis – but leaving you with very little to lol at.

The Last Temptation of Boris Johnson is at The Lowry until 7th March.