Last Chance To See: Pomona at The Royal Exchange Theatre 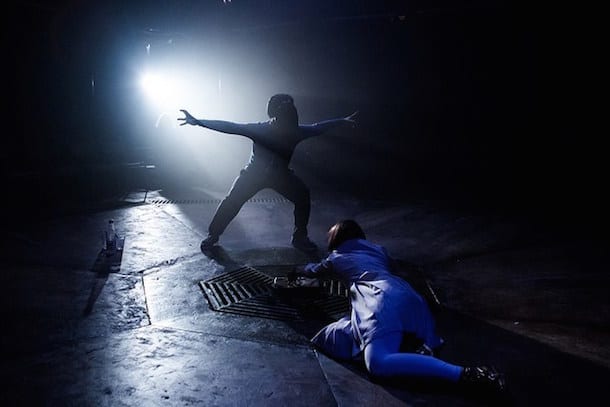 Emily Oldfield reviews Pomona, a dystopian mystery play which has already seen success at the Orange Tree Theatre in Richmond and The National Theatre and is now in its final stint at the Royal Exchange Theatre in the city which inspired it.

The place Pomona itself is an industrial wasteland just outside the city centre, which the writer Alistair McDowall uses to symbolise all the bad in the world we choose ignore. He certainly has ambition and this is expressed through a wicked blend of humour and horror.

“a play which
not only makes
you question
your prejudices,
but question
what is real and
what is invented”

It’s certainly a play which will mess with your mind. It is non-linear, interchanging between the colourful lives of six characters in modern day Manchester, switching rapidly between time and place. Zeppo is the character there at the beginning, a swaggering figure we are invited to see as ‘lost’, clothed in a parka and ridiculous Y-fronts.

Then we learn he’s a property magnate who owns most of the city, putting a real spin on our perspective! Welcome to Pomona, a play which not only makes you question your prejudices, but question what is real and what is invented. Ollie is a girl seeking Zeppo’s help to trace her missing sister who has become a sex worker and subject to the sinister regime of brothel boss, Gale.

The sordidness of society is everywhere, placed on direct display – in fact, the horrible drain at the centre of the stage could symbolise it. It is a point characters seem to circle round, trapped in a desperate loop like debris in a sink. It is upsetting to see how some characters seem to accept that this sordidness will always stay with them, like the weathered-looking sex worker Fay, (played with real conviction by Rebecca Humphries).

Others try to imagine themselves out of it, with security guard Charlie pulling his headphone-hooked friend Keaton into an epic role play fantasy game. Perhaps this is an attempt to distract himself from his day job guarding Pomona, the place characters often mention but no one seems to know. Not even Moe, who has been guarding it for ages.

It is this underlying uncertainty which keeps characters moving. The round stage is cleverly utilised by director Ned Bennett and movement director Polly Bennett with the actors never leave the stage completely. Instead, they linger in the aisles and sit with the audience. This behaviour seems to go against the warning Zeppo gives at the opening of the play, that the greatest mistake is ‘getting involved’.

Yet the audience can’t help but feel involved, especially due to the emotive acting of Sam Swann as the loveable Charlie. We see him struggling in a pool of his own blood in one scene, whilst providing much needed comic relief in another, joking about a childhood fantasy involving a mattress with a hole in it.

The non-linear narrative means we have seen Charlie die before we are acquainted with his life – and throughout the play we are tempted to ignore this, much preferring to pretend that he can carry on in his fantasy world. We’re even tempted to ignore his criminal record when his role in a primary school shooting is revealed later.

Why? Because we are part of a society which turns reality into fiction and vice-versa to comfort ourselves and preserve the people we like. We construct narratives to suit ourselves, rather than reflect reality. Perhaps this is McDowall’s gritty comment on a modern culture where so much is based on invention and distraction. A recurring laptop, passed from character to character, symbolises how we do this today. After all, we inhabit invented worlds – social media ‘profiles’, online games, the Internet itself.

What helps, then, is to see the play not as an overarching narrative but a series of social constructs. It can be confusing at times, but so can the society we have created – an important message. I was lucky enough to attend a question and answer session with Alistair McDowall, who emphasized that the play is about ‘modern anxiety come to life’. It asks us the question, how can we expect clarity from a play when we don’t have clarity in our own feelings and our own lives?

Running for 1 hour and 40 minutes, the audience is placed in a position of enforced self-reflection as there is no interval and it’s incredibly intense. It challenges our ignorance, the spaces in our knowledge like Pomona that we choose to leave untouched.

Pomona could be seen as the emptiness and uncertainty underlying all we do. It’s why characters throw themselves into cycles to try to avoid it, circling around that awful drain, just like we lose ourselves in working routines.

Especially notable is the fiery Gale played by Rochenda Sandall, a brothel mistress caught in a desperate cycle of consumerism, who is more interested in money than the uncertainty of the fates of her clients. Yet uncertainty is all around us, and particularly so in Manchester, the site of derelict Pomona itself.

That’s why it matters more than ever to see the play, in its last week, in the city that inspired it. Ultimately, the only way you’ll uncover what Pomona is, is to go and see for yourself.