Revealed: what the new Manchester Peace Garden could look like 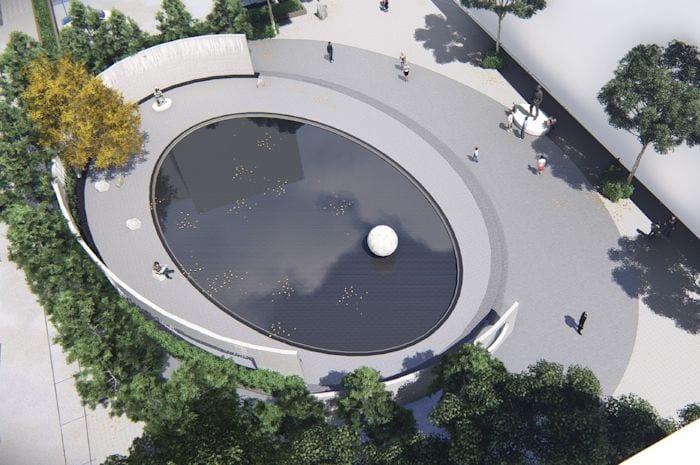 Students from the Manchester School of Architecture are helping shape the design of Manchester’s proposed new Peace Garden.

The tree-filled memorial space, which included the Messenger of Peace statue of a woman with doves by sculptor Barbara Pearson, was removed from St Peter’s Square in 2014 to make way for the redevelopment of the square.

Since then, the Friends of Manchester Peace Garden have been campaigning to get the garden re-instated, with Lincoln Square on Brazennose Street identified as a suitable site.

Postgraduate students at the Manchester School of Architecture – jointly operated by Manchester Metropolitan University and the University of Manchester and ranked 6th best in the world and 2nd best in the UK, according to the QS Subject Rankings 2017 – were given a week to devise proposals for the new-look space.

Working in close collaboration with the Friends group as well as design practice Planit-IE,  who were recently appointed to deliver the public realm of the area, 36 students worked in groups over a very intensive week to explore how the word ‘peace’ might be translated into a contemporary public space in a rapidly changing city.

The groups presented their proposals to a panel of judges, with the winning proposal an oval reflecting pool semi-enclosed by a wall punctuated with ‘windows’ and enlivened by a continually flowing waterfall: a simple, powerful and very professionally presented vision of a new icon for the city centre and a space for contemplation.

Steve Roman, spokesman for the Friends of Manchester Peace Garden, said: “We have been in discussion with Manchester City Council officers and senior councillors for several years and submitted a prioritised list of city centre sites in which we would like to see the Peace Garden re-established.

“After we addressed the council executive last October the then leader, Sir Richard Leese, stated that Lincoln Square would be the location for the new Peace Garden.

“Thanks to the generous involvement of Eddy and the Landscape Architecture team, the Friends will be able to put our ideas for a new Peace Garden in visual, presentational form.”

The plaques, memorials and statues that were located in the original Peace Garden are in storage and have been earmarked for re-siting in a new Peace Garden alongside potential new artworks, poetry or imagery; the existing Lincoln Square statues; and gingko trees currently being grown at Dunham Massey from seed donated to Manchester City Council by the Mayor of Hiroshima.