We headed to Kosmonaut, the kool kids hang out in the Norther Quarter to try out their food offering.

It’s a quirky (should that be kuirky) bar done in that NQ style that you’re probably all familiar with and none the worse for that with its minimalist booths, retro decor, and a bustling, chillin’ vibe.

The drinks there are fab and we knocked back a few beers and cocktails as well as a quaffable (should that be kuaffable – OK I’ll stop with the Rooney K’s in front of everything) Prosecco and a rather gorgeous cocktail that appeared from nowhere.

There’s a dining/hang out bar that’s light and airy and a back room that’s more bar/club/masonic meeting place. 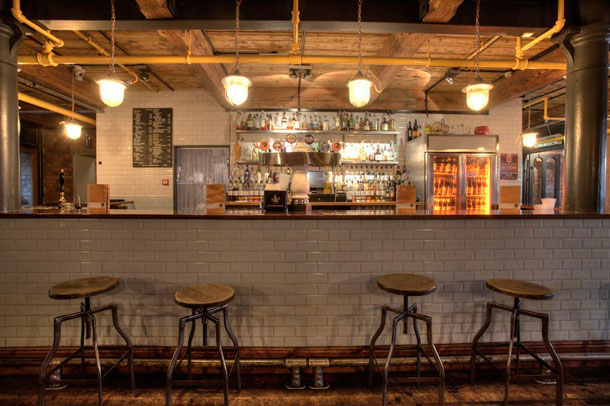 The food itself is the inevitable Americana burger/hot dog/pizza menu that’s sweeping our city, with some yummy sounding sandwiches (we didn’t try those) and mains including a steak.

First the good bits. It is incredibly reasonably priced with snacks from £2 for ‘skin on fries’ which were wonderfully salted and tasty.

Meals (it’s not a starter, main, dessert kind of place) are from £5.50 and included an excellent classic burger, served for us with pulled pork. I also liked the chilli on the chilli dog and the stingy, tart Manchester Egg was pretty delectable. Unfortunately the Veggie burger didn’t quite cut it with us, it was rather like cardboard but that’s maybe because our party of 4 were unashamedly carnivores. 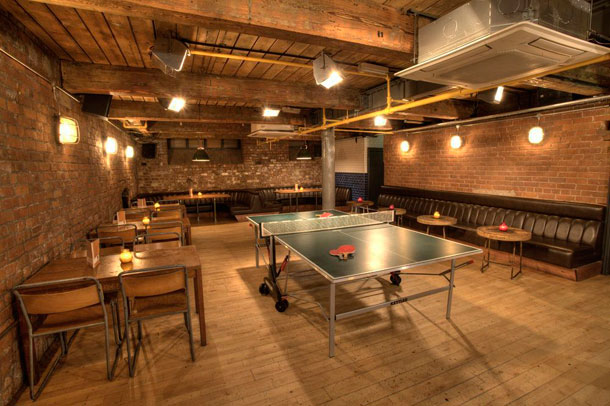 Conclusively with it’s cool, boho vibe and relaxed atmosphere this is a great venue to visit for drinks, snacks and Friday night hanging out off the beaten track. They even have their own ping pong table and this Thursday will see them host their regular ‘Pasta Paul’s Post-office Pay day Ping Pong Party’ (try saying that after a few rum punches!!).

Ultimately there could be some improvements on the menu but it’s definitely worth dropping in for a drink and a game of pong.

With minor tweaks on the food hopefully soon we’ll be eating our words.