A surprise marraige proposal in the heart of the city... 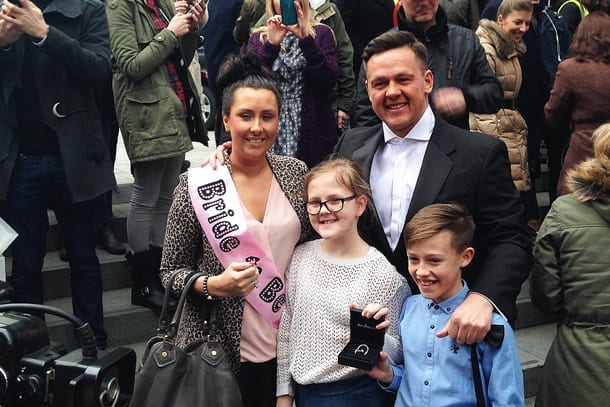 Another reason why people really do love Manchester; Key103 this morning delivered Manchester’s biggest ever Surprisal – a stunt based surprise marraige proposal in the heart of the city that drew huge crowds and a raft of fantastic social media response.

Key103 finally revealed the marriage proposal they have been secretly planning for weeks as the story rolled out live in Spinningfields with ‘Wreck My Dress’.

The idea for ‘The Surprisal’ was introduced to Greater Manchester just a few weeks ago by Mike & Chelsea on the Key103 Breakfast Show. Working with partners ‘Wreck My Dress,’ they invited listeners to put themselves forward for the chance to win what promised to be a totally memorable experience.

Listeners detailed the reasons they felt they should win. The winning nomination came from Darren McLeod from Stalybridge, Tameside, who told Key103 how he had planned to propose last year, but due to a close bereavement in the family, he felt the time wasn’t right and he would have to wait to ask his bride to be. It was then that the secret planning work really began; pulling together a surprise proposal that would knock the bride to be, Rachel Hepworth, off her feet and into the arms of ‘Mr X’, as he had been known on air during the build-up. 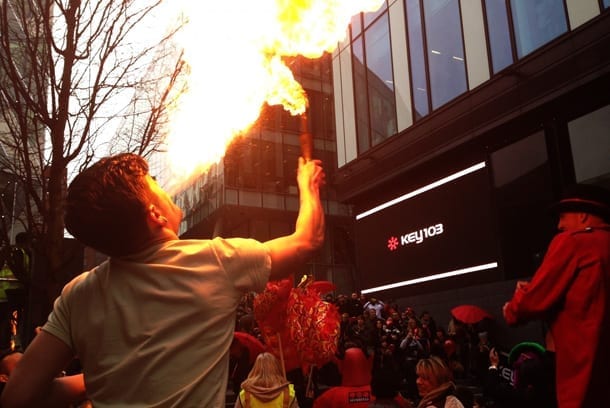 Interest from listeners grew daily and suggestions for what should be involved started flooding in to the Breakfast Show. Ideas ranged from the wild and whacky to the utterly romantic. As Mike & Matt started to take control in Chelsea’s absence there was talk of Monster trucks, fire eaters and even Chinese dragons! Fortunately, Wreck My Dress was on hand to rein them in and make sure we delivered a truly romantic and memorable experience for the lucky couple.

Tony Wallwork, Director at the Wreck My Dress Experience, led the creation and development of the ‘Surprisal’ and commented ‘One Mancunian romantic will get the opportunity of a lifetime as we create the most amazing marriage proposal for the love of his life in the most memorable bid for the all-important ‘Yes!’ Naturally, we jumped at the chance to work with Key103 on this. We just love this stuff. It’s what we do and we do it well’ 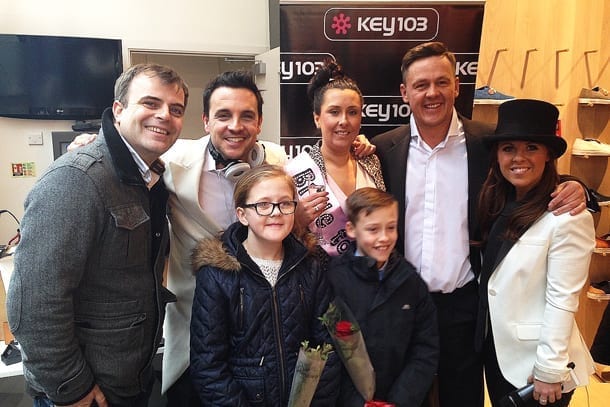 The event all took place in and around Spinningfields. The couple had just sat down for Breakfast in the Grand Pacific when the Wreck My Dress team began the stunt with a rogue explosion in the kitchen. The Bride was escorted outside where huge crowds had gathered waiting to see how she would react. Key103’s Adam Catterall dressed as a policeman was faking crowd control and kept Rachel waiting on the steps in front of the crowd as we waited for Darren to arrive. Rachel looked totally shocked as she took in the live music and dance performances including Mike, Matt & Chelsea from Key103 Breakfast. It all started to become real for her when she saw Darren in a fabulous tuxedo, walking towards her with a fabulous engagement ring that was very generously supplied by Randall’s of Altrincham. Their children also joined in by presenting Rachel with fabulous bouquets of flowers from David Wayman Flowers, right at the heart of where the Surprisal was unfolding.

The whole crowd fell silent as Darren finally got to ask her the all-important question, closely followed by rapturous cheers, confetti, music and mass celebrations as they kissed and enjoyed their big moment! The final surprise element came as the couple were told that they were about to be whisked away to Manchester airport for a romantic weekend away in Paris. They were greeted at the airport with champagne and a Valentine’s Day choir.

The entire event was secretly captured on camera from start to finish and expertly created into a truly memorable video by the Wreck My Dress team for the happy couple to treasure and share with friends and family.

To share the Key103 Surprisal experience, go to www.key103.co.uk/win/the-surprisal.

The video will be live from Monday February 17th.