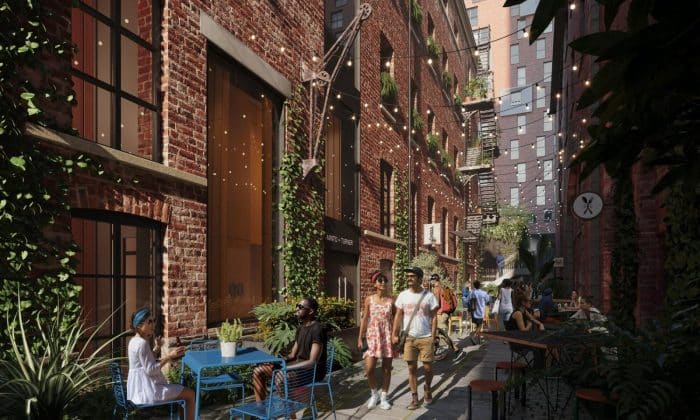 New neighborhood Kampus has announced it will celebrate the highly anticipated re-opening of Little David Street with a summer block party held with ShinDigger brewery.

Taking place on 4th September from 2 pm-10 pm, local Manchester brewery ShinDigger will bring their annual block party to the historic Little David Street, which has been closed over for over ten years. The party will be complete with live music, street food, local drinks and entertainment to celebrate the new garden neighborhood and the street re-opening.

Little David Street was once a forgotten cobbled street but is now set to become a bustling, alfresco hang out, buzzing with bars, cafes, shops and restaurants as part of Kampus’ new development, worth £250m. As part of the summer celebrations, ShinDigger will bring a vibrant selection of fresh session beers alongside summer vibes to the new Kampus neighbourhood.

The summer party, curated by Reform Radio, will have a host of music stages playing a mixture of funk and soul, garage, disco and bass sets. Alongside the main stage on Little David Street will be a ShinDigger bar, a chill-out stage in the Kampus garden, street food traders and a canal-side food and drink offering by Le Social, who have taken residency at the Bungalow.

The party forms part of the neighborhood spirit that new development Kampus wants to encourage amongst residents. The new development was revealed earlier this year as a £250m garden neighbourhood being developed in central Manchester by Capital & Centric and HBD.

The stylish blended living features a quirky rooftop village of Amsterdam inspired Dutch Houses that sit atop of North Block. With high ceilings, panoramic views across the city and huge suntrap terraces, the Dutch Houses are the penthouse reimagined, say developers.

The apartments and homes are surrounded by spectacular Manchester views and architecture, including Minshull Warehouse. Once a Victorian shipping warehouse, Minshull Warehouse, has been lovingly restored to create individual apartments perfect for city living. Residents have already moved into the one and two bedroom apartments in the development, and all of the buildings at Kampus are set to fully open over the upcoming months.

Just across from this is Minto & Turner, which is a red-brick, grade II-listed canal warehouse and was originally built to store cotton transported on the Rochdale Canal. However, it has now been brought back to life with contemporary loft-style apartments full of original features.

All of Kampus residents can benefit from the state-of-the-art amenities including a brand new gym with free weights, cardio and core equipment and a yoga studio, as well as a 24-hour concierge service. Additionally, there are added extras including dog walking, dry cleaning, PT sessions and yoga, a private cinema, lounge, dining room and a number of terraces for residents to enjoy.

The reopening of Little David Street will sit alongside the warehouses as part of several pedestrianised streets that cut through the Kampus garden neighbourhood – and all open to the public.

The Little David Street Block Party will be a ticketed event, priced at £5 for early bird entry or £7 thereafter. Tickets can be purchased via the ShinDigger website.