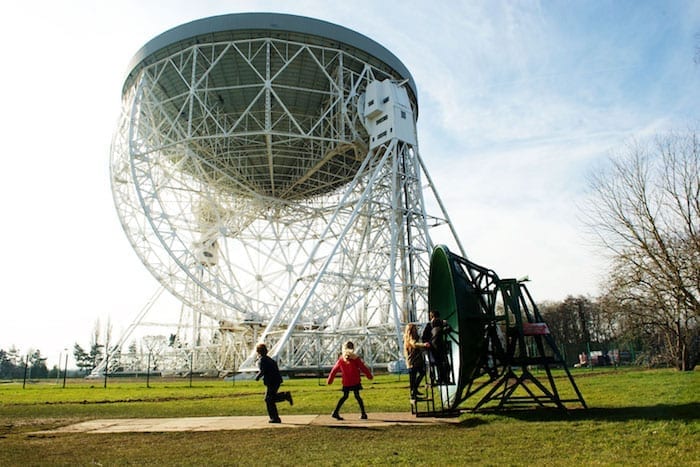 Sir Bernard Lovell’s pioneering radio telescope, rising almost 300ft above the Cheshire plain near the village of Goostrey, has been at the forefront of astronomical research since its inception in 1945 and tracked US and Russian craft during the space race.

It joins the ancient Iraqi city of Babylon, the Taj Mahal and other locations that have been added to the prestigious list.

The UN World Heritage Committee is meeting in Azerbaijan until 10th July to decide on the latest sites to be given the honour, awarded to areas considered to be important for the whole of humanity, which will be protected by international treaties.

Scientific research began at Jodrell Bank Observatory in 1945 when the physicist Sir Bernard Lovell came to the University of Manchester.

The site pioneered the then new science of radio astronomy, which used radio waves instead of visible light to understand the universe.

The Lovell Telescope, which was the world’s largest when it was completed in 1957, is now the third largest.

Jodrell Bank was on standby as the UK’s early warning system against any potential nuclear attack during the 1962 Cuban Missile Crisis, tracked the first spacecraft to make a soft landing on the moon in 1966 and printed the first picture from the lunar surface.

The site has featured in BBC’s Stargazing Live series, Douglas Adams’ Hitchhiker’s Guide to the Galaxy and Doctor Who. But the early story of Jodrell Bank was a real life drama.

Spiralling costs threatened to land the university with a massive debt and land its creator in jail for overspending public money.

When Lovell first proposed building the telescope in 1948, he estimated that it would cost around £60,000 to build. When completed it had cost more than ten times that sum.

The telescope came into operation, still mired in controversy, on 2nd August 1957. Two months later the Soviets launched Sputnik 1, the first ever artificial satellite, and Lovell’s 250-ft-diameter device proved its worth as the only telescope in the western hemisphere capable of tracking it.

The detection of Sputnik silenced the critics who had condemned the telescope as a costly and unnecessary white elephant. It produced not only the first trackings of Sputnik, but also its carrier rocket, the first ever intercontinental ballistic missile.

The site’s new accolade marks the end of a decade-long bid to gain World Heritage status, following a 2010 application to be included on the UK’s nominations shortlist.

Professor Teresa Anderson, director of the Jodrell Bank Discovery Centre, said: “This is wonderful news and a great day in the history of Jodrell Bank.

“It honours the pioneering work of Sir Bernard Lovell and the early scientists here, together with the world-leading research that continues to this day.”

Jodrell Bank also hosts the headquarters of the Square Kilometre Array, an international project to create the world’s largest radio telescope by linking thousands of dishes and receivers across Africa and Australia.

The observatory is among 32 sites in the UK – including Stonehenge and the Giant’s Causeway – to receive World Heritage status and joins a list of 1,100 sites worldwide.

In 2018, the University of Manchester was granted £12.1m from the National Lottery Heritage Fund and £4m from the government’s Department for Culture, Media and Sport for a new discovery centre at the observatory.

Heritage Minister Rebecca Pow said: “The research completed here has transformed our understanding of the universe and it is right that this is recognised.

“Today’s announcement will make sure that this remarkable site will continue to inspire young scientists and astronomers all over the world.”