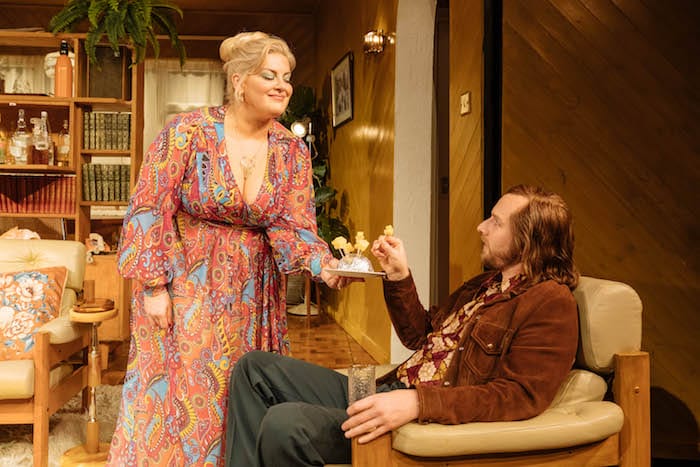 Jodie Prenger always dreamt of stepping onto the West End stage. She had almost given up hope when she entered the BBC’s I’d Do Anything in 2008, went on to win and got the role of Nancy in Oliver!

Since then she has played Miss Hannigan in Annie, and starred in Spamalot, Les Miserables and many more. Recently, she starred in a one-woman UK tour of Shirley Valentine, and has just finished playing the role of Kelly in a production of Kay Mellor’s Fat Friends on its UK tour.

She is about to play Beverley in Mike Leigh’s Abigail’s Party on tour alongside Manchester’s Vicky Binns.

We met up for some some cheese and pineapple on sticks and a chinwag.

Did you ever feel like you had something to prove following your win on I’d Do Anything?

You do really. I never wanted to take for granted the fact that people had phoned in and spent their hard earned money on voting for me. I really wanted to roll my sleeves up and get stuck in. That was the one thing I loved, saying hello to all the folk at stage door. Still to this day. I can’t thank them enough.

How did it feel the first day you performed as Nancy in Oliver?

Now that WAS scary. But it was everything I’d dreamt of. You know, you’re a kid growing up, dreaming one day you’ll perform on a West End stage. And I know this may sound corny, but I honestly thought that moment had passed me by. I’d been to lots of auditions and got the…..”NEXT!”. So to be stood in the wings, ready to go on, it was just mind blowing.

What’s been your most challenging stage role to date and why?

That would have to be the one and only two-hour monologue whilst cooking chips and eggs live on stage. For those who have already clocked it, yep, it’s Shirley Valentine. Again, another bucket list part to play. And one I will hold forever dear in my heart.

What has been the funniest unscripted moment or mishap that has occurred on stage in a show you have been in?

How long have you got? Everything from the smoke machine setting off like a space rocket in the middle of Secret Love in Calamity Jane to me falling smack on the floor in the middle of the bows in Les Mis. Who knows what will happen in Abigail’s Party? But that’s the magical thing about going to the theatre. You never really know what’s going to happen.

You are about to perform in Mike Leigh’s Abigail’s Party. Is it exciting or daunting?

It’s a bit of both really. Its ‘dexciting’ I suppose. It’s a bucket list role. But I’m a lucky lady. We have a bucket list cast and crew, so I’m really looking forward to taking Abigail’s Party on the road.

Tell us a bit about Beverley, your character

She’s brazen as they come and I just love that about her. I’d go as far to say she is the original desperate housewife. I just adore every dynamic of her character.

What’s your favourite line or part of the play?

Hmmm, tough one. How can you ask a question like that when there’s so many? But if I had to choose one of my top three. It would have to be the Demis Roussos section.

What’s the best advice you have received?

My nan said it’s nice to be important but it’s important to be nice.

My family are all from there. It was only really when my Mum was young they moved from Manchester to open a bed and breakfast in Blackpool. I love the place. But you can have all the bricks and cement you want – it’s the people that make Manchester the first class city it is today.

Abigail’s Party is currently on tour and is at the Opera House from 8th–13th April 2019.