Jose Mourinho: it’s not a question of if he will be sacked, but when 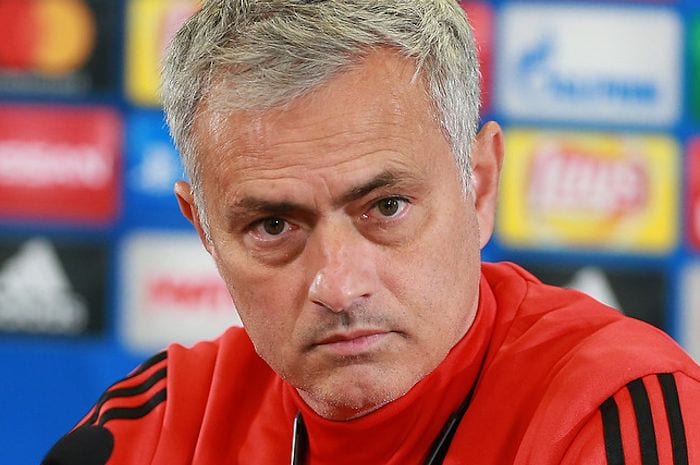 Manchester United fans are resigned to how bad we’ve become. There’s no revolt in the stands. The occasional boo at half-time or full-time is met with condemnation from other supporters. Everyone is happy to leave five minutes before the end regardless of how the team is performing.

Let’s get things straight. What we’re currently being served up is far beyond acceptable. Things have gone too far. The fans should be railing against everything possible – the board for the monumental mess the last five years have been; the manager for the dour football; the players for their lack of pride in their profession.

But they’re not. There’s just a quiet acceptance that this is how far things have fallen. The first thought after the Champions League draw pitting United against PSG in the next round is to simply laugh at how bad it’ll be.

The players seem to have had every last ounce of enjoyment in their game sucked out of them. Romelu Lukaku is the prime example. He has his faults, but he had those same faults when United signed him.

When he first came, he made up for his sloppy first touch by terrorising defenders with his movement, strength and brute force. He looked like he couldn’t stop scoring. Now, he has nothing but his faults. He’s forgotten what he’s good at. He’s getting no enjoyment from his game. And he looks like he’ll never be a consistent scorer ever again.

Put him up against either Dejan Lovren or Virgil van Dijk in a Belgium shirt and you know he’d be a different prospect. Yesterday he was woeful.

Nemanja Matic seems paralysed by the sideways pass. Marcus Rashford seems like he’s carrying the weight of the world on his shoulders rather than enjoying the fact that at 21 he’s a full England international and a regular Premier League performer for his boyhood club. Even David de Gea seems to be low on confidence.

Put simply, this is as bad as it’s been since Fergie left. Worse than under David Moyes. And that really is saying something.

The life and energy have been sucked out of the club and it seems like one man is right at the core.

Before the Liverpool game, Jose Mourinho was asked if this United team played in his image. He said ‘far from it’. Sorry, Jose but this United team is exactly in your image.
Glum, sick of their current situation and unable to get back to the level they once were at. No one at United is playing to their top level. Not one of the players and certainly not the manager.

It’s clear to me what has happened.

Mourinho wanted the job so badly. He courted it at the end of Fergie’s tenure, was shocked when Moyes got it and snapped their hand off to take it once van Gaal was sacked. It was his dream to manage arguably the biggest club in England (cue cries of derision from City fans) and one of the most famous in the world. This was to be the pinnacle for him.

What he actually found was a complete shambles. He found an ex-banker with no idea about football at the helm and a bunch of average players with egos. Most importantly, he found a club with a robust money-making plan, but no coherent strategy for getting back to the top in a footballing sense. As Woodward recently admitted to the stock exchange, football is secondary when you’re making the money United are.

Mourinho’s dream was instantly shattered. He knew straightaway he could never be long-term with the club’s hierarchy in the state that it’s in. He wanted to be the next Fergie, but that would never be possible.

For me, since then his commitment hasn’t been there. He’d rather live in a hotel than commit himself to the city and his thinking has always been short term.

He knew Woodward’s ego would eventually get the better of him and he’d meddle in football matters. That happened over the summer and it’s clear Mourinho’s exit strategy has been on ever since then.

Let’s get something straight. This is no excuse for him. His signings have been dreadful and the football woeful. His vile mood has seeped into all areas of the club. Everyone is drowning in apathy and there’s no one to do anything about it.

It’s not a question of if Jose will be sacked, but when. The bigger questions focus on when the mentality at the top of the club will change. If that doesn’t anytime soon – which it won’t – United fans are in for a long and depressing few years.