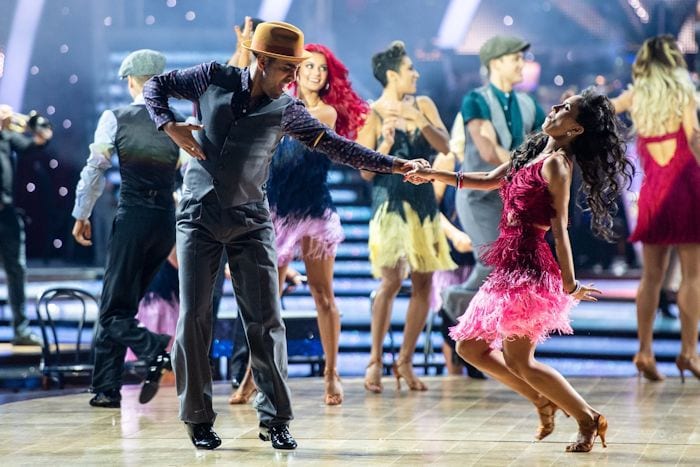 The sequins and spray tans are back. Strictly Come Dancing’s class of 2018 live tour is bringing razzle dazzle to Manchester Arena across this weekend.

Starting off with a group number, the professional dancers and celebrity contestants dazzled in blue sequin outfits as they showed off their moves to Sister Sledge’s 70s hit  We Are Family.

The show then played out much like it does on screen. Each contestant dances with their partner twice, the judges give their feedback and scores, then the audience vote for their favourite performances via text, with the winning couple receiving the Glitterball Trophy.

First to dance in couples were Pussycat Dolls star Ashley Roberts and her partner Pasha Kovalev performing the jive. Ashley and Pasha wowed the crowds with their table-top dancing as the former pop singer made easy work of the first number.

Their second performance of the evening brought some razzmatazz to the dancefloor as they danced the American Smooth.

Graeme Swann was up next dancing with new partner Karen Clifton kicking things off with a cricket-themed samba. Graeme received mixed reviews from the judges for his late timing but managed to find his dancing mojo for their second number as they channelled some serious Mary Poppins vibes for a theatrical jazz performance.

The pair received a huge ovation for their second performance when pyrotechnics blazed while they danced the salsa.  “Get me a fire extinguisher – that performance was hot!” joked judge Bruno Tonioli.

Faye Tozer from Steps, a finalist in December, looked stunning in a gold dress and received four 10s from the judges with partner Giovanni Pernice.

During their second performance, Giovanni had the audience in hysterics as he walked out wearing a blonde wig, comparing himself to Boris Johnson. The crowd couldn’t get enough of the pair’s performances, and neither could the judges who delivered another four 10s.

Gold medallist paralympian Lauren Steadman, who coupled up with AJ Pritchard for the live shows, performed one of the best routines of the evening as they danced the Viennese Waltz. She showed the audience how divine and graceful dancing can be, effortlessly moving across the dancefloor in a pink ball gown.

Internet sensation Joe Sugg and Strictly partner turned girlfriend Dianne Buswell gave a fantastic performance which saw them named winners of the opening performance of a weekend that will see four packed shows, such is the continued popularity of Strictly.

Performing a high-energy Charleston to Cotton Eye Joe, the pair had the audience roaring,  with judge Shirley Ballas commenting: “Your improvement since the first show has been immense” and Dianne replying: “He couldn’t even clap in time to music when we first met – – look at him now!”

2018 winner Stacey Dooley had a new dance partner for the tour and proved why she was a deserving winner of last year’s competition, receiving a standing ovation for her paso doble with Aljaž Skorjanec.

Wearing the same black dress she wore in the BBC final, the judges complimented her on her ability to perform the routine with a different partner. When they received 10s from the all the judges, Stacey ran round the judges’ table kissing Craig Revel Horwood on the head when he revealed his score.

And the performances didn’t stop at the contestants. All four judges showed off their skills to the audience with Craig and fellow presenter and former Strictly winner Ore Oduba recreating Ashley and Pasha’s table dancing stunt.

In an attempt to outshine Strictly’s most difficult judge, Bruno Tonioli kicked off the second half of the show as he SANG along with the live band.  And both Dame Darcey Bussell and Shirley Ballas slipped into golden sequin numbers as they performed with the Strictly professionals at the end of the show.

But what really had the audience cheering was when the professional dancers, who included Nadiya Bychkova, Luba Mushtuk, Graziano Di Prima, Amy Dowden and Johannes Radebe, performed the famous same sex dance routine which made headlines earlier in the year.

And some lucky fans managed to grab a quick selfie with one of last year’s contestants, as Hits Radio presenter Gemma Atkinson joined boyfriend and Strictly professional Gorka Marquez cheered on their former co-stars from the audience.

Strictly Come Dancing The Live Tour is at Manchester Arena until Sunday 27th February with a matinee performance at 1.30pm and an evening performance at 6.30pm. Some tickets still available.