Each week photographer Simon Buckley visits a different part of Manchester, exploring the people and places that make this city such an extraordinary place to live and work.

Tony works as a mechanic in Cheetham Hill. Under an inflamed sky he was hosing down the road immediately outside his workshop, a workshop full of oil and tools and not the home of an encounter group. Behind him a sandwich shop boasted of filling their sandwiches with imagination.

“Do you mind if I take your photograph?” I asked as he sprayed the tarmac in front of me.

“No. It doesn’t bother me.” It looked like very little would bother Tony.

“Have you worked here a long time?”

“A few years” he replied and turned slightly away from me.

At the far end of the street I could see the Green Quarter, with its grey, bullying architecture dwarfing the low level buildings along Dutton Street. I thanked Tony and turned back towards my car, parked near the Dutton Hotel, now with its windows boarded up. A man was apparently waiting outside, still as a chameleon on display, but, when he saw me eyeing up the deceased pub, he picked up a wooden pallet that had been leaning against the Victorian brick wall and walked away. 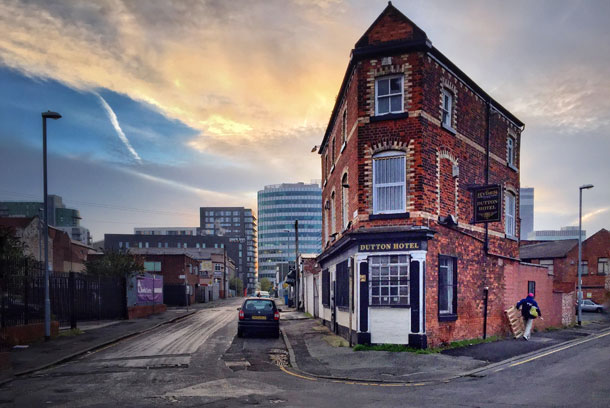 I drove slowly towards Cheetham Hill Road. A woman in her 30s, wearing a padded coat and pink knitted hat, was sitting on a wall and drinking from a carton. She looked up at me and I remembered where I was, and that a man in a slow moving car in this part of the city might look like he was looking for some company. I was expecting her to nod, inviting me to stop, but instead she clearly mouthed swear words.

I turned onto the main road and joined the commuter traffic passing through the area newly anointed as NOMA. The initial fierceness of the early morning had passed, leaving only the soft grey air of autumn, and I wondered if, whilst he was cleaning the pavements and kerbs, Tony ever thought of that line from Taxi Driver – “Someday a real rain will come and wash all this scum off the street.”

The photographs for this story are taken entirely on an iPhone 6, using the native camera and various apps for post production. It’s a simple way of working.