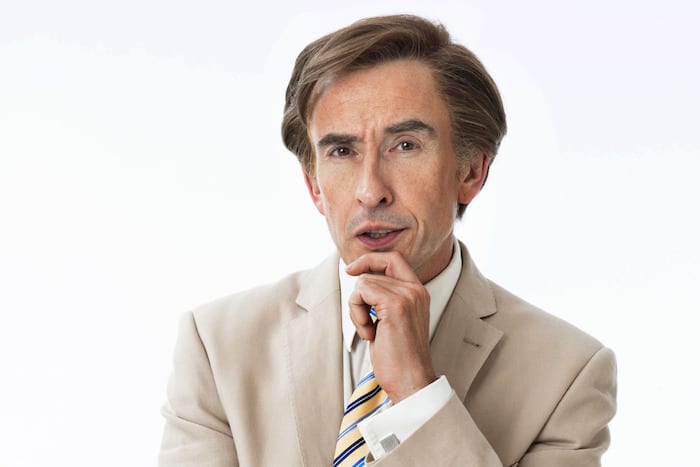 It’s 25 years since Knowing Me, Knowing You with Alan Partridge debuted on screen, a talk show that infamously ended when the host shot a guest live on air. But now Partridge has been given a chance to revive his TV career with a guest stint on the magazine show This Time.

Co-written by Middleton’s Steve Coogan, who reprises his famous alter-ego for the series, This Time with Alan Partridge will see the inimitable broadcaster settle in for his temporary stint on the sofa alongside co-host Jennie Gresham (Susannah Fielding.)

And this time Partridge is determined to receive the recognition he knows he deserves.

Here, the man himself talks about his anticipated return…

So Alan, how did your return to live TV come about?

Well, as you may have read, regular presenter John Baskell has become rendered unwell – it’s not my place to divulge the nature of his illness but I believe it’s to do with his heart, brought on by good living and his almost heroic refusal to ever exercise. So, with a few days’ notice, I got the call. And although my schedule is as clogged as John’s arteries (get well, John) I consider it my public duty to stand in for as long as John is away. Anyway, it won’t be for long. If John can fight this with a fraction of the vigour he uses to fight for presenting work he knows has already been promised to other people, he’ll be on his feet again in no time.

Are you a fan of This Time?

If I’m honest, I’m not super-clued-up on the show itself. I’m not an avid watcher of BBC One, since I don’t like documentaries about supermarkets or period dramas featuring bonnets. But I’ve circled a bit on a This Time press release here that describes it as a ’30-minute mixture of studio chat, rigorous interview, hard-hitting VTs and a generous helping of fun, covering news, issues and consumer affairs’. Whereas I’m more of a Nazi Megastructures man.

How would you sum it up?

Ha! Believe me, I don’t have the time to sit around thinking up marketing taglines for the show. Wish I did! But I suppose if pushed I’d say something like, if you’ve got time to give This Time your time, then it’s time to let This Time spend time making your time a good time on This Time with me, Alan Partridge.

And you’ll be co-hosting with regular host Jennie Gresham?

Yes, very soon I’ll be parking ma backside on the This Time sofa, just inches from Jennie. She’s a broadcaster I genuinely admire. If it’s not verboten to say this in the current climate, she’s the thinking man’s thinking woman and provides not just eye-candy, but ear-candy and even brain-candy too at times. She’s that good.

You’re used to helming your own shows. Have you co-presented before?

Co-presenting is not a dynamic I’m used to, but I’ve been working on a few things. So, when Jennie’s reading the autocue, I might turn my head to face her to simulate listening, or frown solemnly if she mentions ‘cancer’, or wait until it’s my turn to speak and then prefix it with ‘That’s right, Jennie.’ Loads of things you can do.

How do you and Jennie get along?

Gotta say, we’ve only just met but already we have a chemistry that sizzles like liver in a hot pan and crackles like a genuine house fire. We joke about it ourselves! I said to her, ‘Jennie, in the words of Grease, we go together like rama lama lama ka dinga da dinga dong’. And did she laugh! Yes.

And what changes can we expect?

Fear not, I’m not going to eff with a winning formula. But I do have a phalanx of fresh ideas that’ll benefit the show no end, including the introduction of my longtime radio sidekick Simon Denton. Adept at reading out tweets and providing a sideways look at news, he’ll be our social media reader-outer.

It’s a little more serious-minded than the rest of your output?

I’m cool with that. I pull no punches, push the envelope and punch my weight when push comes to shove – if that makes sense.

This Time with Alan Partridge begins on BBC One on Monday 25th February.