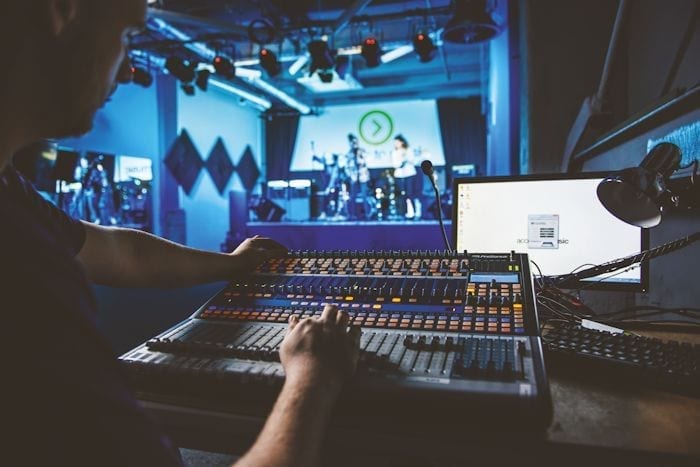 Dry Bar is closing. It’s the latest in a long line of legendary Manchester bars and clubs to switch off their lights for the last time.

Beehive Mill, the Grade II listed former cotton mill in Ancoats and the birthplace of Sankey’s, was bought by regeneration specialists Urban Splash earlier this year and is being turned into workspaces.

The Boardwalk is also office space. And we all know what happened to the Hacienda.

But what you may not know is that below the old Jilly’s Rockworld on Oxford Street, in what used to be Rafter’s and subsequently Music Box, is an award-winning creative college and music school.

The entrance to the college is between Tesco Express and Pizza Express, a two minute walk from Oxford Road train station. 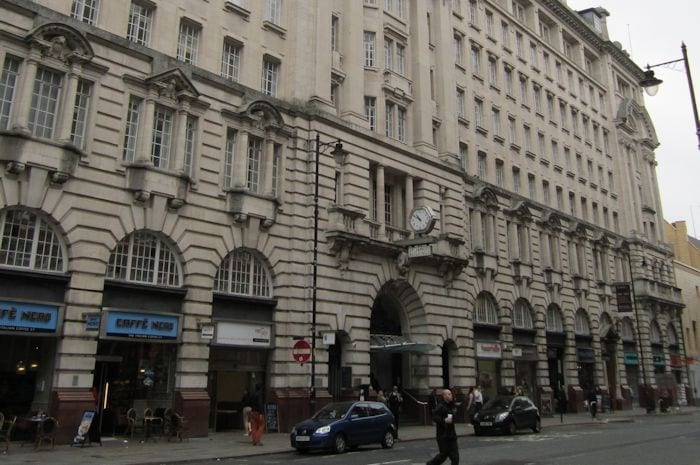 Where Joy Division were spotted by Tony Wilson before he signed them to Factory Records, it’s packed with state-of-the art classrooms and suites, a 100-capacity performance space, full size recording studio and five rehearsal areas.

Access to Music has a bespoke music curriculum, offers a number of music and media courses, and is fully equipped to train the artists, musicians and producers of the future.

You can train to be anything from a sound engineer to a music manager – and there’s a new course set to be particularly popular – Games Design.

Owned by Bruntwood and designed by Atul Bansal of the Sheila Bird Group, the decor blends colourful modernity with authentic old features.  As well as a state-of-the-art Mac suite, there’s wall tiling deemed too historically valuable to be removed!

The College is the eighth of its kind in the country and has star connections of its own. One former student is Ed Sheeran who attended the London branch.

It’s a far cry from the web of rooms which  occupied the space less than a decade ago. In case you never went, here’s a flavour of what you missed.

“I only went to Jilly’s a couple of times after I moved to Manchester in 2002 but I always really enjoyed it,” says Salford City Radio DJ and musician Mark Corrin. 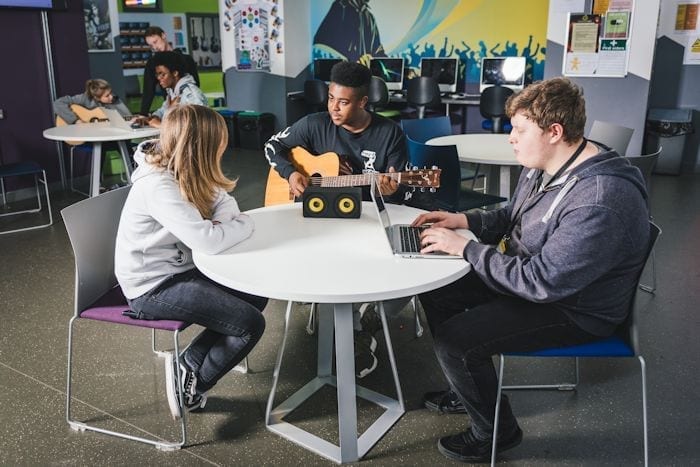 “It was always just a glorious sea of hair as I recall! I fondly remember the sticky floors and bad but cheap drinks and the atmospheric fug of fag smoke that I genuinely miss. That kind of dirty yet seductive aroma is usually just replaced by mass B.O, stale ale and chemical toilet smells in venues these days.

“I remember once going to some kind of ska punk all-dayer there too which was entertaining if hazy due to the free-flowing cider. It’s a real shame that both are gone. At least a music school is a step in the right direction.”

Alex Lee, owner of record store Soundwaves Here We Come in Afflecks, saw The Damned there about 15 years ago.

“I think it’s great that it’s being used as a music school. While things inevitably move on with time, it’s sad it’s no longer a club but reopening it as a music school is probably the next best thing especially considering the recent fate of the nearby Odeon cinema.”

“I can only really remember a night where it was a penny to get in – it was hilarious,” says Giles Bastow, producer of Joy Division themed play New Dawn Fades. “My favourite was the heavy metal bit. Spandex f******g everywhere.”

Keen gig-goer Jade Belisana says, “I wore a prom dress once and no one batted an eyelid”, whilst Lisa Ashworth recalls, “I remember being in Rockworld one night and the music stopped for the DJ to announce that Kurt Cobain had died”. 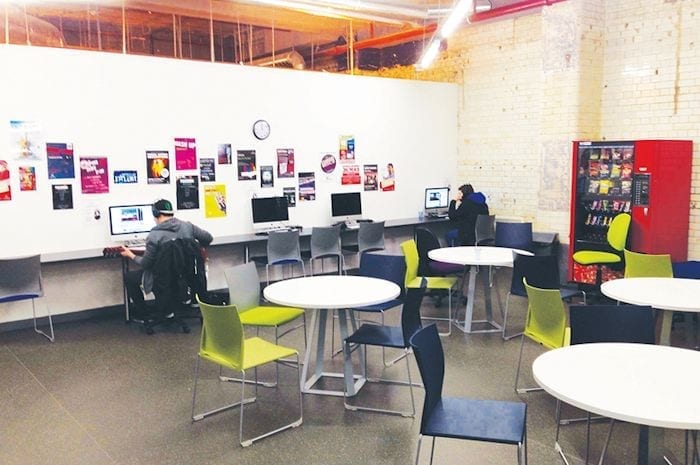 “I saw the Clash play down the stairs there with their American support band Richard Hell and the Voidoids in the summer of 1978,” says session drummer Simon Wolstencroft (formerly of The Fall), whilst another musician, Freddy May, has memories of upstairs:  “The first time I went to Jilly’s was in 1996 after the Marilyn Manson show at the Academy. It was amazing at the time.”

According to Jo Bakewell, it was a venue like no other: “The atmosphere was something else. This may be down to the fact that people came together to get wasted and laugh and have fun. There were no social media events, you just turned up in the hope someone would be there, which they always were.”

Musician Susan Ní Shéaghdha of Salford duo Factory Acts recalls: “It was one of the first clubs we went to when I moved over from Ireland. Loved the mix of ages, genres and styles, from skater pop punk to post punk. Reminded me of the legends that was Sir Henry’s in Cork.”

“I love the fact it is now a music school,” says Mike Richardson. “I really can’t think of anything more fitting. Rockworld was a dive but it was our dive.

“As you went in there were a couple of steps and you are in the foyer where the cloakroom and toilets were – also the area where everyone came and sat down to chat to each other when they were too hot and sweaty or just to actually chat. Inside there were several rooms that had themes which changed depending on what night you went.

“My favourite night was Thursdays which was ‘cheapskates night’ – bottles of beer were £1!” 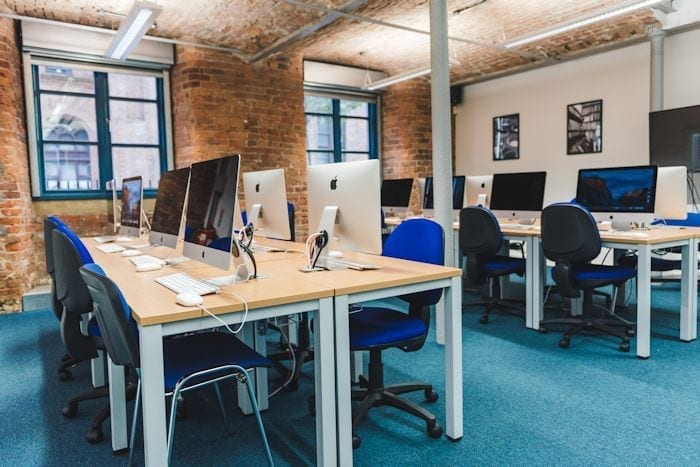 Author David Lascelles, who now lives in Birmingham, recalls: “I went to Rockworld regularly in the mid to late 90s when I was at MMU and later working at the University of Manchester and UMIST as a scientist.

“I used to spend most of the time either downstairs in the Goth room or in the Punk/Crusty room. I recall it being a very friendly and open place that was not concerned about societal norms.”

“I was going nearly every Thursday, Friday and Saturday,” says musician and writer Aidan Cross. “The reasons? It was more than a club, it was a community. You’d always be guaranteed to meet people you knew there, and you’d meet new people and make new friends nearly every night there too.

“It was very easy to talk to people and it was the perfect place to just be yourself, dress how you wanted and do what you wanted, it was a haven for the misfits, those of us who’d be branded weirdos in any regular club. There was nowhere quite like it.”