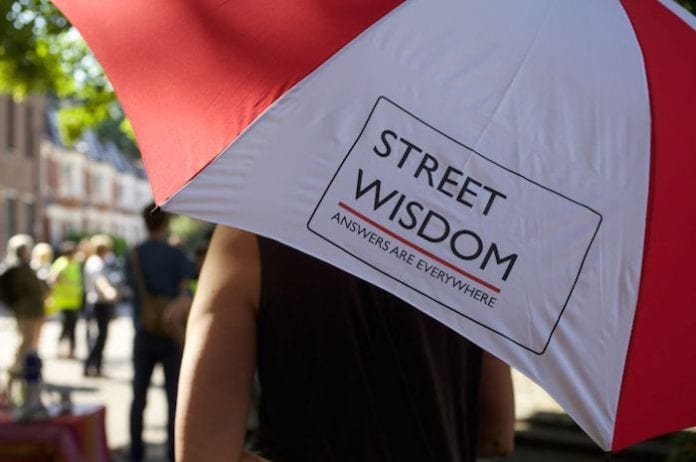 The email was intriguing to say the least. It read as follows:

The rise in anxiety and people seeking therapy post Brexit (feelings of uncertainty about their future), has been huge since the referendum result. Street Wisdom offers the perfect antidote whichever side of the fence you are on. The founder of global social enterprise Street Wisdom, David Pearl, is running a session in Manchester on the 20th July in association with the RSA. 1:30 to 5pm. Meet outside the John Rylands Library. Book a space here.

Then those three little words we all love to see – It costs nothing. So I booked.

We met outside John Rylands Library on a hot afternoon. Forty four people had booked but only half turned up – par for the course, according to the organisers. Nice.

David, the founder, had come up from London armed with a red and white golf umbrella. He must have believed the things they say about it always raining in Manchester. As it happens, he had the last laugh because the umbrella came in handy as a parasol.

Following a brief introduction, the group split into three and the afternoon unfolded.

“People are looking inwards on the street. What happens when you turn your attention outwards?” asked David. Time to find out. 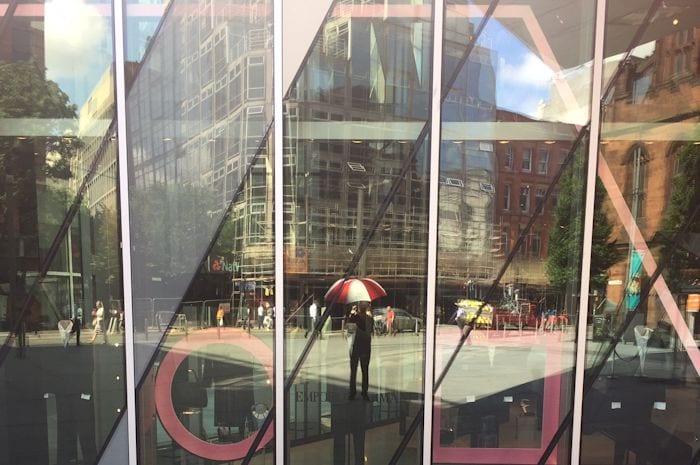 According to the old Eddie Cochran song, there are Three Steps to Heaven. There are also three steps to street wisdom.

Step 1
Become more sensitive to what’s going on around you. This involves a number of exercises to help you fine tune your senses. One of the exercises I was given was to go for a walk, but to move very slowly. This was one of the most difficult things I’ve ever done. It makes you feel very odd and self-conscious. It can also be quite dangerous when crossing the road.

Step 2
This involves walking around thinking of a question and looking out for answers in your surroundings.

Step 3
The third part took place at the Home of Honest Coffee where everyone shared their experience of what happened to them during their walks and where, true to his name, David dispensed pearls of wisdom.

So what is street wisdom? It’s a technique which has been developed to help you find answers everywhere – if you learn how to pay attention to the world around you.

Does it work? It clearly worked for some of the people who took part, judging by their feedback in the final session. And it’s being taught and practised in 25 countries, not to mention by companies such as Google and The Financial Times who are using it with tangible results in productivity and engagement. So the answer is yes, it does.

Did it work for me? I’m not sure. On my walks I saw things for the first time even though I’ve walked the same city centre streets thousands of times before. I’m certainly going to keep trying it.

Would I recommend it? Definitely, especially if you are open-minded and not someone who dismisses things they don’t understand or that can’t be explained as mumbo jumbo.

Street Wisdom is a social enterprise with a mission to bring inspiration to every street on earth. As mission statements go, that can’t be bad. It’s more than you can say for Pokemon Go.