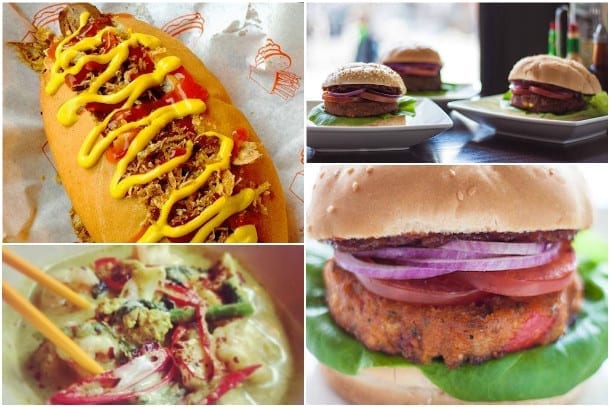 If you had told me a few years ago that I was going to cut meat, eggs and dairy foods out of my  diet, I would probably have thought you were one sandwich short of a picnic. But I did just that in January when I saw PETA’s “Go Vegan in the New Year” pledge

“I’ve been
shocked to
discover just
how easy a
vegan lifestyle
is, especially
in Manchester”

It seems I wasn’t the only one – according to PETA, more than 6,000 other people took this journey with me.

From promises of glowing skin to a lower carbon footprint, my reasons for trying la vida vegan were varied. Mostly, though, the idea of eating someone just sat uncomfortably with me – as did the idea of drinking cow’s milk. (I mean, if you think about it, you have to admit it’s pretty strange that humans are the only species to drink the milk of another animal.)

Still, I hesitated because I feared going vegan would be difficult, and so I’ve honestly been shocked to discover just how easy a vegan lifestyle is, especially in Manchester. Aldi and Tesco have pretty much everything I need, and I get other vegan items, such as egg replacers, at Unicorn Grocery in Chorlton. There are great fruit and veggies at the Arndale Market. And since Sainsbury’s labels its own brand products as vegan when appropriate, it’s a doddle to pick up snacks there. Not only is my shopping a cinch, the overall cost has also dropped quite a bit, too.

In addition, going vegan has opened up a new world of tasty foods to me. Some of my favourites include tofu Thai green curry, spicy lentil hot pot, homemade hummus and falafel wraps – the list goes on and on.

Of course, traditional foods are still on the menu: I use the Linda McCartney brand of sausage for bangers and mash, and pudding can be bought pre-packaged or cooked at home. I recently made a brilliant dairy – and egg-free chocolate cake at home, that was quite possibly the best chocolate cake I’ve ever eaten – even if I say so myself. 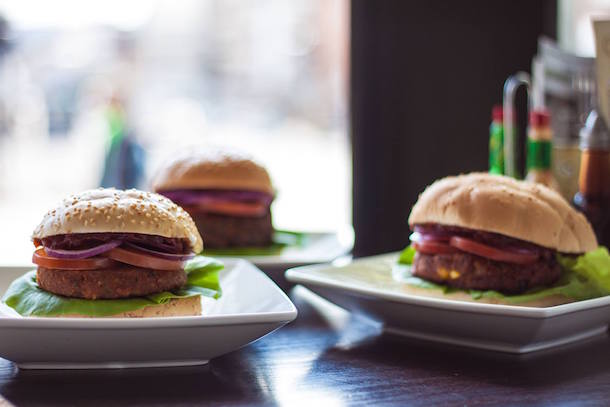 Dining out in Manchester is also an absolute breeze – vegan options are everywhere. So far, one of my favourites is Handmade Burger Co, which offers five (yes, five!) decadently delicious vegan burgers that are all registered with The Vegan Society. Seriously now – the options include Cajun vegetable and bean, sweet potato and bean with mango salsa, spinach and lentil with relish. Are you getting as hungry as I am?

I also can’t wait to eat again at Dough, which offers a tasty apple-soaked couscous salad and a simply gorgeous wild mushroom and garlic oil pizza that will leave you dreaming of it for days after. Plus, it has dairy free cheese!

Odd Bar is another hit – I can personally vouch for its vegan full English breakfast, which is perfect for the “morning after”!

Moghli also offers a delicious vegan menu. And Bakerie offers a delicious tapas-inspired vegan board with mix-and-match dishes such as ratatouille and stuffed vine leaves. For an after dinner drink, I enjoy The Fitzgerald, Rosylee and Alchemist – vegans love their cocktails as much as anyone!

And I haven’t even gotten to Manchester’s vegan-only cafés and restaurants. Northern Quarter’s V Revolution has vegan food on the naughty side – grilled cheese and hot dogs, ice cream milkshakes and freshly made desserts like salted caramel chocolate chip cheesecake.

On the cleaner end of the spectrum, Salford’s lunch wagon Cowherds offers healthy vegan meals like a raw taco salad and coconut and lentil dahl.

But you don’t need to turn to specialist restaurants for your next vegan meal. Well-known high-street chains such as Wagamama, Pizza Express and even Nando’s, which most people think is off the cards, have their fair share of vegan dishes. And as you probably know, they’re tasty, fast and relatively inexpensive.

So what next, after 30 days as a vegan? There’s no way I’m going back to eating animal-derived foods. I learned that vegans spare many animals a year from being mutilated without painkillers, crammed into filthy and windowless sheds and horrifically slaughtered at an abattoir and that vegan foods are better for the planet.

Each year, approximately a billion animals are slaughtered for food in the UK, and huge amounts of animal waste end up in our water, land and air. I’ll pass on contributing to that, thanks.

Another reason for continuing to follow my brand-new plant-based lifestyle was finding out more about how good it is for me. Before going vegan, I had headaches all the time and found myself taking a nap in the afternoon or evening nearly every day. I was knackered, no doubt about it. But after making the switch to plant-based foods, my chronic headaches have cleared up, and I feel full of energy. I sleep a full eight hours each night and don’t need rest during the day.

Now that I know how easy it is and how good it makes me feel, I can’t believe I didn’t do this sooner. That’s why I want all Mancunians to take this compassionate, healthy and planet-friendly step with me. So whether you do it for your health, for the environment or for animal welfare, give vegan eating a try today. You won’t regret it.

For more information on a vegan lifestyle and to order your free vegan starter kit, please visit PETA.org.uk