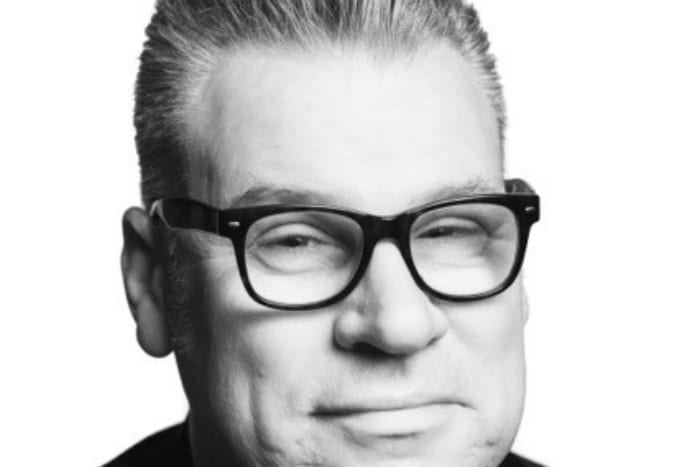 Film critic and broadcaster Mark Kermode was awarded the Faculty of Humanities’ Outstanding Alumnus award by the University of Manchester in 2009. That’s university-speak for being an official honorary Manc.

Next week, he’s returning to the city for a very special event at HOME.

“I’ve written this book called How Does It Feel?, which is about being in bands and about growing up playing in bands, and three chapters of it are about The Railtown Bottlers, which is a skiffle band I was in, in Manchester,” he told us.

“We started as a skiffle band playing on the streets of Edinburgh during the Festival and then we became regulars on St Ann’s Square, outside the Royal Exchange. We would busk there every Saturday.”

The name of the band was directly inspired by Manchester.

“The Railtown bit of the Bottlers was because that was what Manchester used to be referred to, as Railtown, because it was the place where all the trains came in. And Bottlers, because when you busk, the bottler is the person who goes round with the hat”.

The event at HOME represents a reunion gig for the Railtown Bottlers, but it will be more than that.

“Matt O’Casey, the guitarist, said, ‘Look, wouldn’t it be nice to do a show which had lots of stills, lots of images, lots of photographs of Manchester of what it was like when we were playing there in the eighties and the kind of history of the band?’

“So we’ve put together this show which is actually different to the shows I’m doing for the rest of the book tour. It’s much more about Manchester in the eighties, how the band formed, where we came from. We’re going to see whether we can still play the songs. I think we can.”

Mark first came to Manchester in 1982 as a student at Manchester University.

“I went to Manchester because I went to school in north London, and when I was there, the only thing I wanted to do was to put two hundred miles between me and the place where I grew up,” he says.

“All I knew about Manchester was that I’d read about it in the New Musical Express. I’d seen pictures of bands like Joy Division looking moody on that bridge going over the Mancunian Way and it was two hundred miles away from London.”

Mark lived in Manchester for six years and has nothing but happy memories of his student accommodation.

“The first year I was in Manchester I lived in Owens Park, which is the sort of tower block hall of residence,” he says. “I was on the top floor, the fourteenth floor, which I really liked because I had a room to myself, and I had a view that when the sun came down it looked like Blade Runner.

“In the second year I moved to Rusholme, which is where the Curry Mile is and all the best curries. In the third year, I moved to Hulme, and I was there for the three years I was doing my PhD.

“We had a flat in Otterburn Crescent which looked out onto that bridge where Kevin Cummins took the picture of Joy Division. Hulme became a sort of magnet for waifs and strays and there was a lot of arty stuff going on. It was a weirdly bohemian air, with an edge of violence.”

As for participating in Manchester’s legendary music scene, Mark has fond recollections of the Hacienda.

“The first year I went to Manchester, the Hacienda was just starting and one of the first things I did when I got there was I went straight to the Hacienda and I bought a membership card,” he recalls.

“Apparently those membership cards are now very collectible. Who knew? I cut mine up to make plectrums.”

In the beginning, the Hacienda was doing very badly, Mark recalls.

“It didn’t have very very full audiences, and the sound was awful because it was like an aircraft hanger. But they had a thing, like a student night on a Monday night in the downstairs bar, where you could get cheap beer and you could see smaller bands like Toxic Shock from Birmingham, who I absolutely loved.

“And then upstairs, I saw Orange Juice, and I saw the Higsons, which was the first pop review I ever wrote. I saw Sisters of Mercy, I saw Psychedelic Furs. You’d go there to see those bands. By the time Oasis and all that stuff kicked off, I’d gone, because that came later on.”

One thing that stood out for Mark at the time was his introduction to VJ-ing.

“I had a friend called Danny Jacobs who used to DJ there and he used to do this thing that back then was considered to be very funky – VJ. He would play videos as well as doing the music so we’d stand in the Hacienda bar for ages looking up at bootleg videos of Clockwork Orange and The Exorcist.”

Manchester also has a special place in Mark’s heart because it’s where he began his career as a film critic, writing for City Life.

“There was this magazine called City Life, which was a worker’s co-op. It was like the Mancunian equivalent of Time Out. It was a local listings magazine and because they were a worker’s co-op, they had this thing that they would take on anyone and everyone. You could walk into the office and literally refuse to go away until they gave you work – and god bless them, they did.

“Nowadays, people say, ‘How do you get into film journalism?’, and I say, ‘Well, you get in a time machine and you go back to Manchester in the 1980’s’. It was completely different. Nowadays I genuinely don’t know how people do it.”

Mark Kermode: How Does it Feel?: A Life of Musical Misadventures is at HOME on Tuesday 2nd October 2018. Tickets cost £20/£18 concessions.