Do you call a flat roll a barm, a barmcake, a teacake or a muffin?

You might not think it’s an important question, but linguists from a Manchester university  want to know.

They are launching a new research project which seeks to uncover and celebrate the many diverse accents and dialects from around Greater Manchester.

The researchers hope the project will celebrate the region’s “rich linguistic and cultural heritage” and nurture a sense of social and regional pride.

Back in 2017, Dr Erin Carrie and Dr Rob Drummond, who are both senior lecturers in Linguistics at Manchester Metroplitan University, ran a pilot project which revealed the huge linguistic diversity in Greater Manchester. For instance, whether people say barm, barmcake, teacake or muffin can vary over just a few miles.

Other words distinctive to particular areas in Greater Manchester such as lickle in Bolton, skriking in Oldham and cruckled in Rochdale were also unearthed.

That inspired them to investigate the region’s language use in much greater depth.

Now they are going back on the road in their red Accent van to interview people across the region about the way they speak. 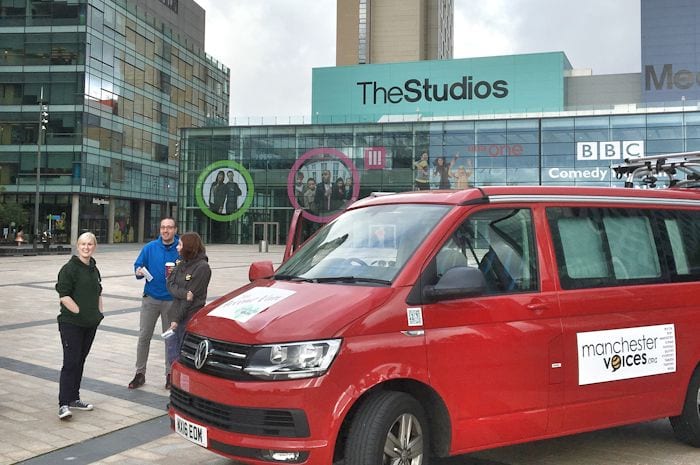 “A central part of the project will involve a comprehensive tour of the ten boroughs of Greater Manchester in the Accent van – a specially kitted-out vehicle which will serve as a mobile interview booth and recording studio,” said Dr Drummond.

“Taking this approach will give us access to a far greater range of people, stories and insights than we might otherwise get, and allows us to uncover and explore the accents, dialects and identities that make up Greater Manchester.

“The results will provide the most detailed linguistic and attitudinal description the region has ever seen, while simultaneously celebrating diversity through language in a variety of artistic forms.”

Participants will be quizzed on how they interpret the way they and their neighbours speak, revealing the deeply embedded beliefs regarding the status and value of different regional accents and dialects.

“The way we speak is an important aspect of who we are and where we’re from – it links us to people and to places,” said Dr Carrie. “Through our research, we want to represent all voices from Manchester and to celebrate the similarities which give us a sense of belonging and the differences which make us unique.”

The project, which is funded by the Arts and Humanities Research Council, will culminate in a permanent Manchester Central Library installation and archive celebrating the area’s rich tapestry of voices, and a public resource which will be stored in the new Manchester Poetry Library, opening at Manchester Metropolitan in 2020.

The installation and resource will feature audio and video interviews with people from each of Greater Manchester’s ten boroughs, an interactive dialect map and an archive of regional poetry that features many of the area’s diverse dialects.

Manchester Voices is a £700,000 project funded by the Arts & Humanities Research Council.