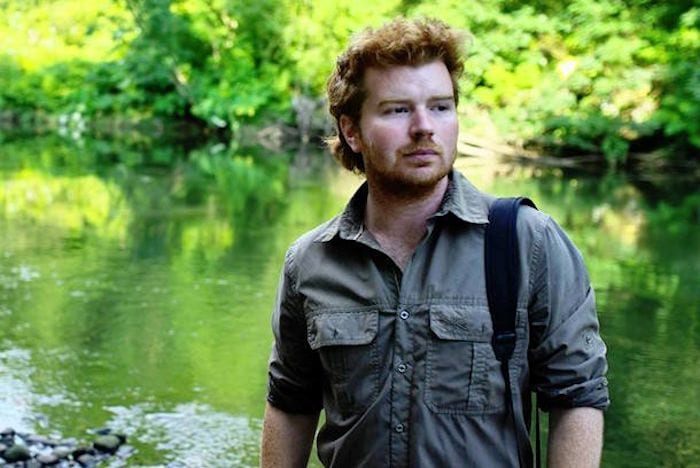 Luke Blazejewski was cycling home in Salford, where he has lived for more than 10 years,  when he was attacked by a group of five youths. He was punched over 20 times, left bleeding from the head and with a black eye. His equipment and bike, a black Dawes Galaxy road bike, was stolen.

Luke described what happened on social media: “I was cycling home along the river toward the bridge near my house. When I got to the bridge one guy blocked the way with his bike, and his friends just kind of jumped on me. They started punching me in the face until I fell off my bike, and then carried on hitting me. One guy shouted “Give me your fu**ing wallet”. I managed to get away but they stole my bike with my pannier bag and everything in it.”

The incident happened alongside the River Irwell, where Luke has recorded rare species.

Recently, he’s been filming meadow pipits nearby too, as part of an upcoming project on the new wetland area and flood basin.

He even created a fascinating short film Stories of the River Irwell which explored the waterway and local people’s relationship with it. It was nominated for Best Cinematography at the Focus International Film Festival.

Salford is over 60% green space. Luke has recorded a number of increasingly rare species, including the ironically named Common Blue butterfly.

Years ago there would have been well over 50 of these butterflies along the Irwell in Salford at any one time, but in 2018, Luke estimates the number could be as few as 4.

Luke is recognised as someone who has celebrated and supported Salford. He is the leader of Nature in Salford, a group which seeks to reconnect people with the local landscape. His short film The Birds of Peel Park celebrates the birdlife of this Salford green space, one of the world’s first public parks.

It has been selected for the SunChild International Environmental Film Festival, putting Salford on the international map.

Luke is a significant figure behind the River Irwell flooding clean ups, including at Kersal Dale. He is also a passionate anti-plastic campaigner and encourages everyone to pick up litter and take their rubbish home.

Literally its first day on Earth and this baby swan is being strangled by #plastic in #Manchester. Luckily its parents stepped in. When will we draw the line and go #plasticfree? Please share if you can @SeaStrawUK @MENnewsdesk pic.twitter.com/gaKF0toemW

The attack has left him feeling uncertain about the place he has done so much to celebrate:

“While it was happening I think 2 people walked past. I shouted for help a few times but they carried on hitting me, and nobody stopped to help. After it happened I was bleeding from the head and the only person to stop was a young boy who must have been about 10 years old. He seemed really scared by the blood, but wanted to make sure I was alright. Then I called the police and ambulance.

“I’m disappointed in the city I’ve called home for 10 years. I thought Salford was better than this. I’m also pretty sure they ran away with my bike onto the new wetland area to hide from the police. I’m actually making a film about the wetland, as it’s been a great space for people and wildlife in Salford. Right now I don’t know how I feel about that, but I just wanted to tell everyone that I’m fine.”

Many people have come forward to express their support for Luke with acts of kindness for a man who has done so much for the area.

Luke says that the biggest show of support you can give is to care about nature in Salford too. And it’s worth celebrating. At the end of the 19th century, only five species of birds were found in Peel Park, with just two nesting. Now there are over 30.

“There are so many hidden gems in Salford from Clifton Country Park to Blackleach Country Park, to the far-reaching expanse of Chat Moss and even the Salford Trail, a brand new 50+ mile walking route that will take you through some of Salford’s most beautiful green spaces,” says Luke.

Get involved and give them a visit. You can also keep updated with Nature in Salford on social media.