How to tell if it’s going to rain in Manchester: a quick guide 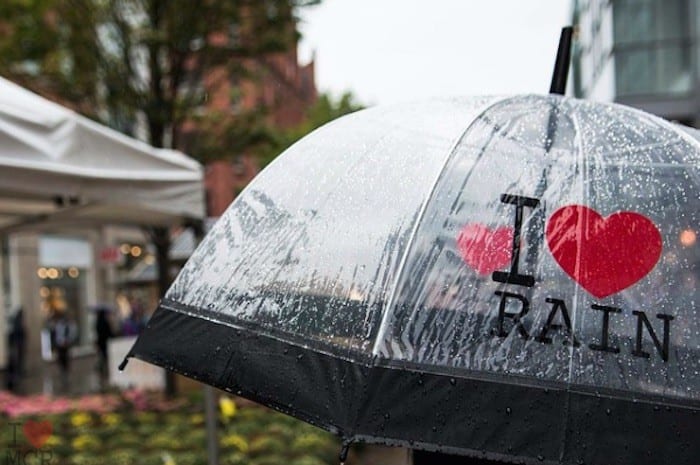 Manchester’s reputation as the UK capital of rain took a knock recently with the publication of a new league table ranking the wettest towns and cities in the country.

According to research by Freeflush, a rainwater harvesting company based in, yes you guessed, Manchester, an average of 867mm of rain fell here each year between 1981 and 2015, putting Manchester 15th in the rainfall league table, behind places like Preston, Leeds, and Cardiff, the reigning champions.

In football terms, this makes Manchester the Swansea City of rain.

But if rainfall is measured by the number of rainy days, Manchester does rather better. Or worse, depending on your point of view.

By this measure, Glasgow is top of the table, with Manchester finishing sixth, making it, appropriately, the Manchester United of rainy cities.

All of which means that it rains little but often in Manchester. On 152 days a year to be precise. The trick is knowing which days they’re going to be.

So for the benefit of visitors, or anyone just curious about the likelihood of rain in Manchester on any particular day, we’ve come up with the following simple rules.

Rule #2. The chances of rain are even higher at weekends, especially bank holiday weekends, or when there’s an outdoor event such as a parade, festival, sponsored run or bike ride.

Rule #3. Rain is guaranteed on any day you want to hang your washing out to dry or have a barbecue.

These rules aren’t scientific. They’re based on experience with a bit of Sod’s Law thrown in for good measure.

Rain has stopped play at Old Trafford – Pakistan are 71/5 following the wicket of Masood by @jimmy9 #EngvPak pic.twitter.com/V10KlifCLi

That’s why the most surprising thing about the One Love Manchester concert wasn’t Liam Gallagher’s appearance there but the fact that it didn’t rain. Not one drop.

Because the words ‘rain stopped play’ aren’t exactly uncommon at Old Trafford in the summer.

However, normal service was resumed last weekend, proving that the One Love Manchester concert was an exception to the rule.

All those heading to #PARKLIFE2017 this weekend take your wellies as it’s wet but more importantly have fun and stay safe. pic.twitter.com/wUoC7qqmSH

But next time you get a good Manchester soaking, remember this. The most precious commodity on the planet isn’t gold or oil. It’s water. And we’ve got plenty of it. Which makes Mancunians some of the richest people on earth.

Just don’t forget your brolly if you’re planning a visit.